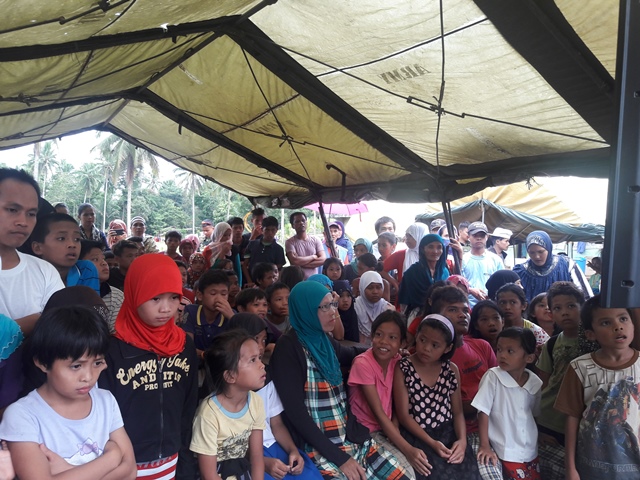 Evacuees in Baloi, Lanao del Sur watch a film show by the Army.

SHE HEARD gunfire just outside her classroom in the Jamiatul Philippine Al-Islamia College in Banggolo, Marawi City. Teaching social science to college students, Sittie Haima Sultan wondered whether this was just another shooting that sometimes erupts in the area and ends as suddenly.  But this time the shooting did not stop, growing louder, along with screaming of people in the streets. It was in the afternoon of May 23, 2017, the day a band of ISIS-inspired militants stormed the city, igniting a humanitarian crisis, now on its fifth month.

The rest of the day became a blur; Sultan was not able to go home. She stayed in her grandmother’s house and made her way the following day out of the city as government officials directed residents to leave their homes. The gunfight between the militants and government troops had transformed Marawi into a war zone.

“Ina Bae (grandmother) was so stubborn, she didn’t want to leave the house,” she said. But last she checked, Ina Bae was safe, and so were her family and relatives who were all staying in different places.’ 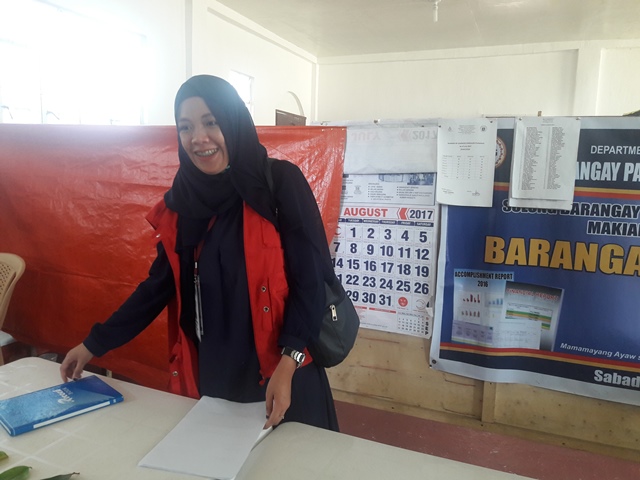 Being one of the more than 300,000 people displaced by the crisis had not detered Sultan from volunteering to help other “internally displaced persons (IDPs)”. A graduate of Mindanao State University (MSU) and a registered social worker, Sultan who is in her 20s was immediately assigned as camp manager of an evacuation center in the Mumuongan Learning Center in Baloi, Lanao del Sur.

As things settled down in the evacuation camps, she was assigned responsibility for a community of 50 families with 231 individuals. She manages all activities in the camps, including visits from private individuals, NGOs and international development and humanitarian organizations who wish to donate for the needs of evacuees. She supervises the feeding, health missions, psychosocial sessions for children and adults, and seminars on peace and nonviolence.

Sultan saw her life change with the turn of events. As only registered social workers are qualified to head evacuation centers, she saw her new post more as a responsibility rather than a job.”I didn’t see this coming but when I look at what I’m doing now, I can say it’s a rewarding experience.”

Now she is dealing with people of all ages. “The school is different from the evacuation center,” she said. “Here, I listen to people talk, people with difficult circumstances, people who cry at the slightest mention of anything that reminds them of the day of the siege.”

In the neighboring Landa Pamana evacuation center also in Baloi, Lanao del Sur, another social worker, Aniefie Dalion of the Department of Social Welfare and Development, sees to it that the 288 families or 1,272 individuals get the support they need, beyond what government provides in relief goods and services. This involves keeping track of the flow of support and coordinating with those who can help. 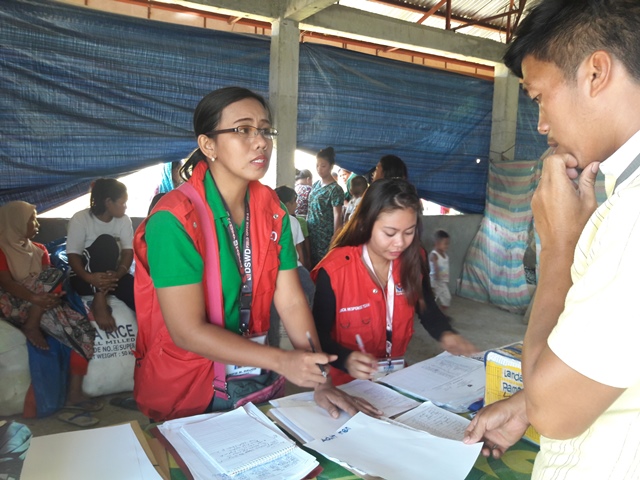 Eight hundred of the population in the camp are youth aged 24 years old and below. A unique request came from adolescent girls who asked for badminton balls and rackets, complaining that there was nothing for them while the boys had been given their own basketball court.

“I told the young women to wait because private and civic groups might have something they wanted,” she said. “In the meantime, we ask them to help in the play therapy for children, as this might unburden them a bit.”

Figures of the multiagency Task Force Bangon Marawi (TFBM) that oversees recovery and rehabilitation efforts in Marawi City note that children aged six to 12 make up at least 20% of the people in evacuation centers. Teenagers make up 17%, and infants, 10%. Play, art, music and dance therapies are all part of the psychosocial sessions for children traumatized by the conflict.

The TFBM also said there are 360,000 individuals or 78,466 families displaced by the conflict in Marawi and are hosted by 19 provinces mostly in Northern Mindanao and the Autonomous Region in Muslim Mindanao. Of this number, 27,000 or 7.5% are in 73 evacuation sites concentrated in Iligan City and parts of Lanao del Sur and Lanao del Norte. There are also 260,000 who are home-based or are living in host families outside evacuation camps.

Females in the military also share in the recovery efforts. Two of them, Pfc. Stephanie Geroy and Cpl. AikoTadulan of the 103th Army Brigade civil military operations regimen, were assigned to the evacuation centers in the third month of the conflict.

Interviewed in Baloi, Lanao del Sur, Geroy and Tadulan agreed that their unit’s slogan, “Winning the hearts and minds of the people,” has different meanings for dislocated residents and evoke mixed feelings about women and men in uniform.

The mood was festive in the evacuation camp as the soldiers set up tents for a film about what happened in Marawi as food was prepared in a mobile kitchen so the community could have a meal of rice, chicken and cabbage. As they mingled with the evacuees, soldiers also provided music playing Maranao musical instruments.

Geroy led a children’s storytelling activity. “Sometimes, we have drawing and play activities so that the children can forget what happened even just for a few fleeting minutes,” she said. Tadulan said that unlike children, the adults are a bit more restrained in their participation in socialization activities, preferring to sit together and talk quietly. “We try to understand and reach out, which is more important,” she said. Fully aware that conflict can set people apart, she knows that they still feel the pain as they hope to return to their homes and find decent living conditions.

“If I had my way, I would sit down and spend more time with these people much longer,” said Tadulan.”It’s no joke wanting to know what happens next and waiting to go home.”

As the activities were being held, they could see military aircraft circling the skies from time to time, as airstrikes and firefight have not yet ceased in nearby Marawi City.

Sultan, the former teacher, said her hope is for these military activities not to become ordinary, daily occurrences, that these remain momentary episodes that displaced Maranaos will be able to forget, even after the long wait for the fighting to end and for real rehabilitation to begin.