For more information on the Jaime V. Ongpin Awards for Excellence in Journalism, please contact the Center for Media Freedom and Responsibility at any of the following numbers: 894-1314/894-1326.

WINNERS IN ONGPIN AWARDSKNOWN BY JUNE 25 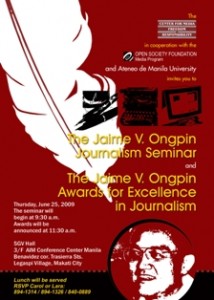 THE BEST investigative and explanatory reports published in 2008 will be named on June 25 from among eight finalists during the 20th Jaime V. Ongpin Awards for Excellence in Journalism (JVOAEJ), the Center for Media Freedom and Responsibility (CMFR) which administers the awards has announced.

This year’s finalists are:

US SUBPRIME CRISIS: WHY WE SHOULD WORRY
By Des Ferriols
The Philippine Star
October 11-14, 2008

A POLICY OF BETRAYAL
By Miriam Grace Go
abs-cbnNEWS.com/Newsbreak
Published in The Philippine Star on March 15-17, 2008

THE MANY FACES OF BRIBERY
By Aries Rufo
abs-cbnNEWS.com/Newsbreak
Published in The Philippine Star on September 11-13, 2008

QUEDANCOR SWINE PROGRAM ANOTHER FERTILIZER SCAM
By VERA Files
Published in BusinessMirror on September 2 and 4, 2008, Malaya and The Manila Times on September 1-3, 2008 and Philippines Graphic on September 15, 22 and 29, 2008

To focus attention and encourage reporting on the urgent issues of human rights, the environment, and governance and corruption, the JVOAEJ awards this year still scanned both investigative and explanatory articles on these three topics, but added a fourth theme, the economic and financial crisis.

This will be the thirteenth year that the Canadian Embassy will award the Marshall McLuhan Prize, a travel study tour of Canada to one of the winners.

CMFR will hold the Jaime V. Ongpin Journalism Seminar at 9:30 a.m., which aims to stimulate public interest and support for investigative and explanatory journalism through a panel discussion on what went into the research and writing of the chosen articles. As has been the practice since 1995, selected finalists participate in a panel discussion about their articles and take questions from the audience of mostly journalism faculty and students. The awards ceremony will follow at 11:30 a.m., after the seminar.

The seminar will be attended by faculty members and students of journalism and mass communication from different universities in Metro Manila.

Both the seminar and the awards ceremony will be held on Thursday, June 25, 2009 at the SGV Hall, 3/F AIM Conference Center Manila (Benavidez cor. Trasierra Sts., Legaspi Village, Makati City).

The first JVOAEJ were given in 1990 to honor the late Jaime V. Ongpin, who was secretary of finance during the Aquino administration. A press freedom advocate, Ongpin was involved in the struggle against the Marcos dictatorship and was instrumental in harnessing public support for the restoration of democracy in the Philippines.

One response to “WINNERS IN ONGPIN AWARDS KNOWN BY JUNE 25”