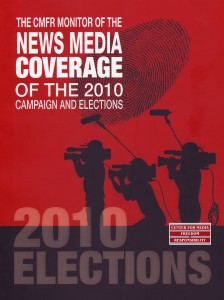 The Philippine press registered a number of improvements in its coverage of the 2010 campaign and elections.  The leading media organizations broadened their coverage of independent candidates and small parties, and provided the electorate information on the advocacies and/or programs of individual candidates.

However, some lapses were still evident, among them the uncritical use of propaganda spin and character assassination in the coverage, as well as scant coverage of the vice presidential, senatorial and party list elections.  Government media’s mistaken concept of public information as public relations led to biased coverage in favor of Arroyo administration candidates.

In its 2010 findings, CMFR noted that modern technology also influenced the manner and conduct of the 2010 campaign and election coverage. The press prominently used social networking tools and citizen journalism initiatives in their reporting; but CMFR expressed concern over the integrity and quality of information online.

The Monitor recommends that the sources of funding of radio blocktimers  be made known, and  blocktimers identified  during campaign and election periods.

The CMFR Monitor report also recommends the amendment to the Fair Elections Act  to rescue it from the changing and seemingly whimsical interpretation of its provisions by the Commission on Elections. The amendments should include clear rules on TV airtime limits for candidates.

The Monitor report contains CMFR’s findings on the coverage by Manila-based newspapers, television news programs, special and public affairs shows, news and blog sites, radio stations, and tabloids of the 2010 campaign and elections.  It also contains analyses of: