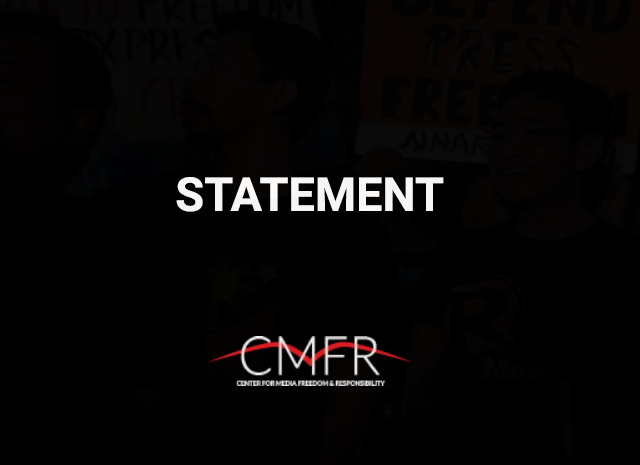 THE WARRANT of arrest issued against Rappler  CEO and Executive Editor Maria Ressa continues the Duterte regime’s persecution of media organizations critical of the administration.

It is also the most outrageous of the chain of threats and harassments to which Rappler has been subjected since 2017. An extreme measure, it is by far, the clearest indication of the president’s determination to silence the critical press. Worst, the issuance of the warrant reflects the willingness of the courts to surrender its independence to executive command.

Whatever case the government may have against Rappler can be prosecuted without the arrest of anyone in the organization. Rappler’s lawyers maintain that the warrant was issued with haste, without the benefit of full preliminary investigation. The speed of government action serves to intimidate and make an example of Rappler. It is the administration’s intent to demonstrate that it will not tolerate the unfettered exercise of free expression and press freedom as provided by the Constitution.

Already, the free-wheeling style of the Philippine press has been tamed.  Critical reports are limited to a few news organizations. In others,  these have been junked or restrained and sanitized.

Rappler is not the first to feel the reach of presidential power. The Philippine Daily Inquirer had been threatened with suits, accused publicly by the president of having enjoyed privileged tax arrangements in the past, although no evidence was offered to support his claim. The TV network, ABS-CBN, was told publicly its franchise to operate would not be renewed. Critical voices in different news organizations have been attacked, harassed and trolled by the president’s supporters in social media.

The chilling effect has been obvious. Never has an administration been given such broad latitude by the press, with reports that merely record the statements of government officials, without correction as needed, without question or analysis.  This president has succeeded into bullying a press that had in the past proven its courage and capacity to speak truth to power, exposing with world-class investigative reports corruption and other wrongdoing in high places. The president has succeeded to instill fear in the press community, especially among the owners of the media.

Government-funded armies of trolls and sock-puppets have weakened the mainstream press.  Critical journalists working in the provinces are clearly an endangered group. Twelve journalists have been killed in the line of duty in the 28 months of the Duterte presidency. Over 80 cases show journalists victimized by other kinds of attacks and threats, including slay attempts, verbal and physical assaults, as well as demands to take down reports that have offended government officials.

The Department of Justice has filed five cases against Rappler alleging violations of the Tax Code, which its lawyers have described as without any legal basis. The arrest order has struck against the heart of free and independent journalism, further weakened the capacity of the free press to discharge the necessary task of providing news so that meaningful discussion and debate can take place.

There can be no democratic discourse without a free and critical media. Independent journalism makes it possible for ordinary people to participate with purpose in public affairs, questioning, probing and pushing back against excessive use of power in public office.

The Center for Media Freedom and Responsibility calls on citizens, human rights defenders, civil society organizations, students and youth, the academe and other professional groups to unite in protest at this outrageous action against a journalist and a news organization. Everyone who values press freedom and free expression needs to call President Rodrigo Duterte to account for this latest and most brazen assault on the very values that make possible the building of a free society.