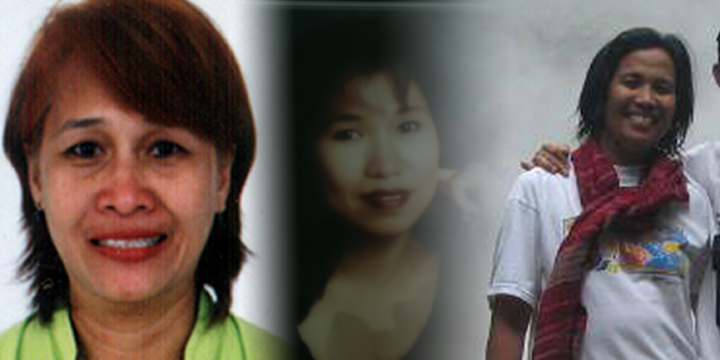 “Despite the preeminence of women in the newsrooms, women journalists continue to be subjected to harassments, threats and attacks.” From left to right: Marlene Esperat, Robelita “Ruby” Garcia and Maricel Alave-Vigo.

ONE OF the themes of World Press Freedom Day 2015 is gender and media, particularly focusing on “the issues of women in media management and portrayal of women in the media.”

This year marks the 20th anniversary of the Beijing Declaration and the Platform for Action, which aimed at “removing all the obstacles to women’s active participation in all spheres of public and private life through a full and equal share in economic, social, cultural and political decision-making.”

According to the report of the International Women’s Media Foundation in 2011 on the Philippines, women are at parity with men in the middle management level at 50 percent and in the junior and senior levels of media work at 45.7 percent and 44.2 percent, respectively. These levels include the posts of senior editor and chief of correspondents, junior and senior anchors, reporters and producers. The study was based on a survey on six media organizations in the country including two newspapers, two radio stations, and two television stations.

Women journalists in the Philippines have also been politically engaged. Journalists Maria Ceres Doyo, Letty Jimenez-Magsanoc and Eugenia “Eggie” Apostol are only some of the women who challenged the press censorship during the martial law regime.

Women journalists who were working during the martial law period continued to shape the Philippine media landscape when democracy was restored. Sheila Coronel and Melinda Quintos de Jesus, for example, formed groups which contributed to media development in the post-martial law period.

Despite the preeminence of women in the newsrooms, women journalists continue to be subjected to harassments, threats and attacks. The Center for Media Freedom & Responsibility (CMFR) has recorded that 10 of the 147 journalists killed in the line of duty since 1986 are women.

To mark the commemoration of the World Press Freedom Day, CMFR pays to tribute these women journalists who were killed for doing their duty as journalists.

Jean Ladringan, publisher and editor of the Southern Star was  on a motorcycle with her husband when unidentified men shot both of them dead  on 8 July 1990 in General Santos City, South Cotabato. Initial police investigation cited robbery as the motive since the motorcycle and other personal belongings of the victims were taken by the gunmen.

But the dismissal of top Muslim officials at the Mindanao State University after Jean Ladringan published an expose implicating them in graft and corruption was seen as a possible motive for her killing.

Gloria Martin, correspondent of the local radio dxXX, was shot dead on 2 December 1992 in Isabela, Basilan. Martin was driving on her way home when she was ambushed by two unidentified gunmen onboard a motorcycle. She died on the spot due to gunshot wounds in the head.

According to information released by Task Force Newsmen, Martin was working on a story about the kidnapping of an American priest by Muslim rebels.  Reports also claimed that she had been receiving death threats since she started criticizing the alleged failure of the government to stop the rampant kidnappings in Isabela.

Unidentified gunmen barged into the Esparat residence in Isabela, Sultan Kudarat and shot dead Marlene Esperat, columnist of the weekly Midland Review, in front of her children around 7 p.m. on 24 March 2005. The gunman who was with a male cohort who served as lookout casually walked out of the house after the shooting.

Esperat’s husband, George, believed the death of his wife was work-related when he called on the authorities to solve the killing of the victim by bringing the perpetrators behind bars. The widower said on a local radio that his wife had made many enemies because of her exposes about the alleged malfeasances of local government officials. Esperat also exposed the fertilizer fund scam in which then President Gloria Macapagal-Arroyo and her Secretary of Agriculture were implicated.

Randy Grecia, Gerry Cabayag and Estanislao Bismanos were identified as the gunman and his companions.  They were convicted on 6 October 2006. The mastermind remains at large.

Peace advocates and part time journalists Maricel Vigo and her husband George were shot dead by motorcycle-riding men on 19 June 2006. The couple was on a motorcycle and on their way home to Sandawa Homes, Singao, Kidapawan City when they were gunned down.

A case was filed against Madanguit but was dismissed by Kidapawan city prosecutor for insufficient evidence in late 2006.

Later, Vigo’s child found a document that his mother signed which included a paragraph that identified the Vigo couple’s killer as someone named Dionisio Madanguit.

A new case has yet to be filed but with the apparent deactivation of Task Force Vigo, which happened right after Madanguit was identified and a case filed against him,  the prospects of  justice for the Vigos remain dim. The case took a more unfortunate turn when Madangguit was reported to have been killed on 3 June 2007 in Makilala, Cotabato. A relative of Madangguit said that the latter had died in a bus accident, but the police said he had been shot dead.

On that day, the reporters, and the wife, female relatives and supporters of  Esmael Mangundadatu— a member of  clan known to have a long-standing political feud with the ruling clan,  the Ampatuans—were on their way to file the candidacy of   Mangundadatu at Shariff Aguak, Maguindanao province for the 2010 gubenatorial race.

Esmael Mangundadatu, after having been warned of possible attacks, sent his wife Bai Genalyn “Gigi” Tiamson Mangundadatu, sisters Bai Farida, Bai Eden and other female relatives since women are believed to be immune from harm among Muslims.

The local media joined the convoy to cover Mangundadatu’s filing of candidacy.

The Mangudadatu and media convoy never reached its destination. A few kilometers from Shariff Aguak, armed men allegedly led by Unsay Ampatuan stopped the convoy at a police checkpoint in Barangay Salman. The group, including the journalists and media workers, was brought to a hilltop where all were shot dead by over a hundred men armed with automatic weapons. The perpetrators planned to hide the bodies and vehicles of the victims in pits pre-dug with a backhoe owned by the Maguindanao government.

Of the 197 accused in the November 2009 incident, 112 have been arrested and arraigned but 85 persons remain at large.

Five years after the incident, the Ampatuan Massacre trial is still on going. Two of the accused died in jail. There were 70 petitions for bail, out of which 42 were granted, with one moot and academic (the petitioner had died), and four denied.

A gunman shot dzME broadcaster Marlina Sumera on 24 March 2011 near her house in Malabon City, Rizal while on her way to the radio station where she works.  Sumera had been commenting on a local land dispute over her radio program Arangkada 1530 (Accelerate 1530). One of these disputes involved the Silonian Homeowner’s Association (SHA) of which Sumera was president.

In a 26 April 2011 press release, the Department of Interior and Local Government (DILG) announced that the Malabon City police had filed charges against Carlos Alejandro, allegedly of a group called Partisano-Armadong Operatibang Partidong Marxista-Leninistang Pilipinas (Partisan Armed Operative of the Marxist-Leninist Party of the Philippines), a hitherto unheard-of group, and three other unidentified group members as suspects in the killing of Sumera, based on the accounts of a witness.

Remate correspondent Robelita Garcia was shot at least four times inside her home and died in a hospital in Bacoor City, Cavite province on 6 April 2014.  Her colleagues said a feud with a police officer was a possible motive for the killing.

Police investigators said unidentified men barged into Garcia’s home at around 10 a.m. and shot her several times. Garcia’s son brought her to a nearby hospital, but she died from multiple gunshot wounds at around 3 p.m.

The killers, who did not bother to conceal their faces, escaped on a motorcycle.

Garcia was also the president of the Confederation of Active Media Practitioners Organization, a group of journalists in the region, and a member of the National Press Club. Garcia started as a blocktimer in radio station dwAD two weeks before the killing.

In the ten cases of women journalists in the Philippines killed in the line of duty since 1986, a total of four alleged gunmen were arrested in two of the six cases. This number does not include the 112  arrested in connection with the Ampatuan Massacre. Of the four arrested, one has been released due to lack of evidence.