Libel in the Philippines is a crime punishable with a fine, imprisonment for up to six years, or both. 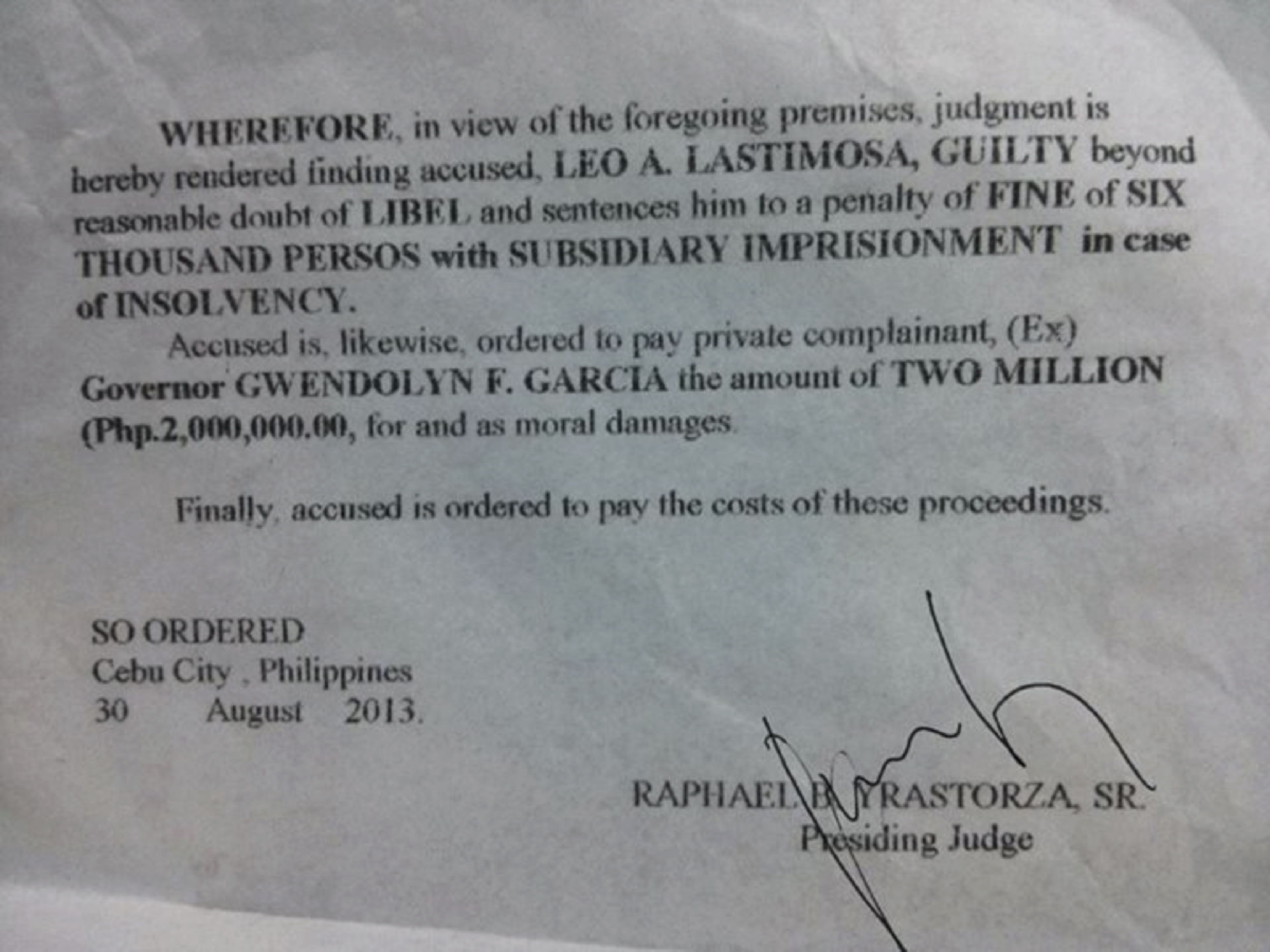 Cebu City in the Visayas is some 1,100 kilometers south of Manila.

Garcia, who was then governor, filed two libel complaints against Lastimosa but only one prospered. The court ruled that Lastimosa committed libel in the article “Doling kawatan” (“Doling the thief” –“Doling” was interpreted by the court as referring to Garcia) published 29 June 2007 in the Cebu newspaper The Freeman.

“I’m interested to know how many have been convicted for satire,” Lastimosa told CMFR in a phone interview on 4 September. ‘Doling’ was described as a fishmonger who became a corrupt barangay (village) captain. “How I described ‘Doling’ in my column is far from (Garcia’s) identity. It was fiction.”

The court did not agree. The judge decided that the elements of libel against Garcia were present in Lastimosa’s article, even though Garcia was not directly named.

But Lastimosa recalled that Sun.Star Cebu editor Pachico Searas was an independent witness in the trial and that Seares, who taught journalism ethics in a local university, had testified that in a survey of his students, nine out of 15 said ‘Doling’ referred to Garcia.

“We will appeal the decision this week,” Lastimosa said.

Further south, Sun.Star Davao editor-in-chief Stella Estremera and former publisher Antonio Ajero were also convicted of libel on 3 September in Digos City, Davao. The journalists were convicted in connection with a ten-year old libel complaint. The complaint cited an article published in 2003 that they said they did not even write.

Davao province in the island of Mindanao is some 1,500 kilometers south of Manila. Digos City, where the trials were held, is three hours away from Davao City, where Estremera was based.

The decision by the Regional Trial Court branch 18 in Digos City convicting Estremera and Ajero was read and promulgated on 3 September, even though it had been made last year, on 18 December 2012.

The article cited a police document identifying illegal drug pushers and users who had surrendered to the authorities.  Saripada was on this list. In his complaint, he identified himself as from the Digos City General Services Office.

Rex Otero, the reporter who wrote the article, was not included in the libel complaint. He no longer works in the media, Estremera told CMFR in a phone interview on 4 September.

There was another editor included in the complaint: former SuperBalita Davao managing editor Ely Luciano. But he passed away in 2010, Estremera said.

Otero stood witness in the trial according to Estremera. He testified that he tried to call Saripada for comment on the inclusion of his name in the police document, but that he received no answer.

However, the court still decided to convict Estremera and Ajero, saying that the journalists failed to get Saripada’s side of the story. The decision did not mention Otero’s testimony.

The accused were also ordered to pay a PHP6,000 fine in lieu of jail time, and PHP200,000 (some USD4,500) in damages  to the complainant. In the complaint, Saripada had originally asked for PHP1-million.

“I’m glad a decision was finally made after ten years. I feel free,” Estremera said. The accused were not able to talk about the case when the trial was on going. They also had to take leaves from work to attend the hearings, which Estremera said frequently got postponed.

“We can finally move on to the next step.” Estremera and Arejo will also appeal the decision before a higher court.

“It was a simple police report that every (journalist) does,” Estremera said. “It just goes to show that if somebody is really determined to silence you, there is legal instrument (to do) it.”