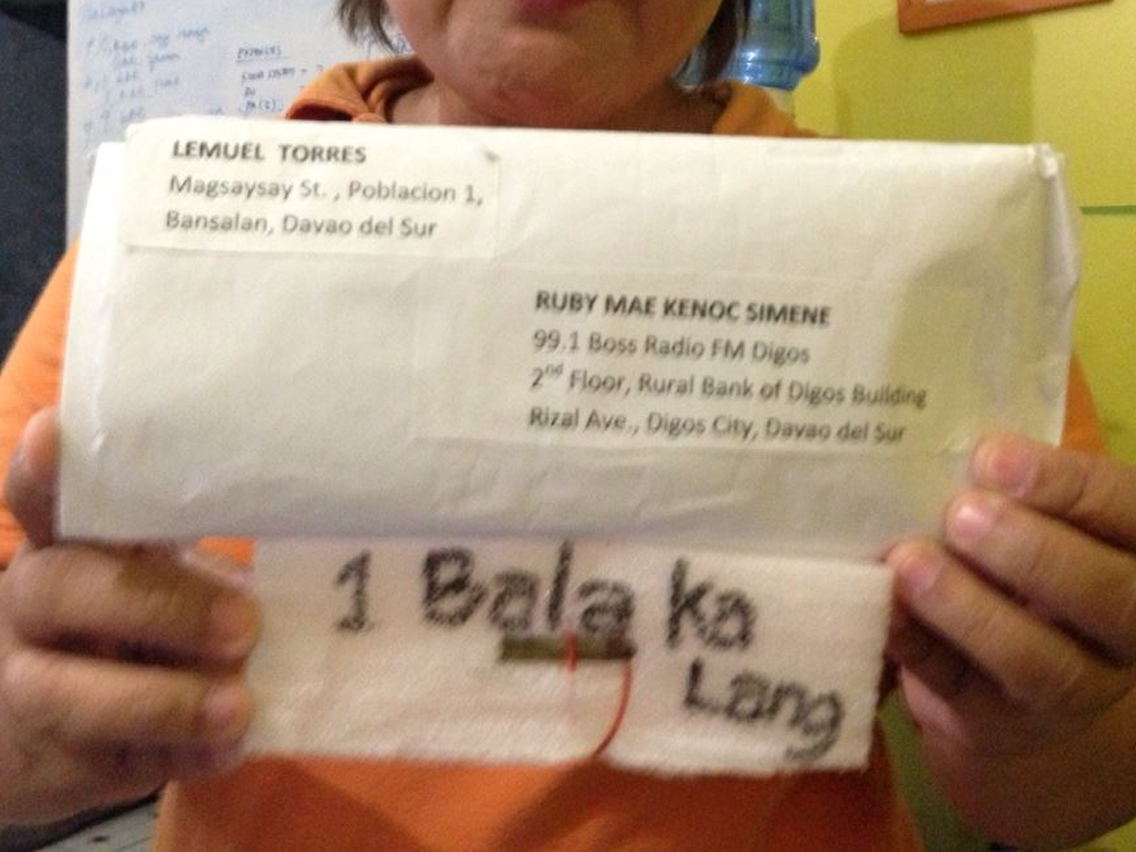 CMFR/Philippines – Unidentified men stole a radio transmitter and other equipment in Digos City, wounding the radio station’s caretaker in the process, on 8 September 2013. Five days later, on 11 September, a broadcaster from another radio station received a death threat sent via a commercial courier.

Digos City in the province of Davao del Sur is some 1,500 kilometers south of Manila.

MUEWS 97.5 FM station manager Arvin Malaza told CMFR on 24 September 2013 that he was at the radio station airing coverage of Digos’s 13th cityhood anniversary when the transmitter house was taken over by armed men.

The transmitter house was in Barangay (village) Soong, some seven kilometers from where the radio station in downtown Digos City.

Roy Veronas, who had been caretaker of the transmitter for only six months, was shot twice and wounded in the right arm. He escaped the armed men, getting bruised in the process, and was brought to the hospital. He said he would no longer work for the station.

The transmitter and other equipment, estimated to be worth PHP900,000 (some USD21,000), were missing after the incident.

“We had a back up (weaker) transmitter but it’s wonky. We lost about 50 percent of our normal coverage area,” Malaza said. “The stolen transmitter and equipment had a password and was registered. It can’t be taken apart and resold.”

Asked about the possible motive behind the attack other than theft, Malaza said it could be their station’s stance against illegal gambling in the city, in which local politicians and some police officials are allegedly involved.

Simene immediately reported the incident to the police. The package indicated that the sender was a certain Lemuel Torres, but Simene said they checked with voters’ registration records and concluded that the name was bogus. They went to the local branch of the commercial courier from where the threatening package was dropped off, but found no footage of the sender from the CCTV cameras.

“That was the first time I had ever received a death threat,” Simene told CMFR on 24 September 2013. She started working for radio in 1989 and currently hosts a developmental and information program called “Boss Balita Ug Uban Pa” (“Boss News Etc.”).

Simene mentioned a possible motive but asked not to include it in this report as she had “no evidence” to support her speculation.

“At an informal meeting outside the city police office here … (Local journalists) cited the case of a colleague whom the police accused of ‘imagining threats to his life,’” the report said.

Three journalists have already been killed in Digos City since 1986.  Two worked in radio.  Mt. Apo Current and Kastigador publisher and editorial assistant Nestor Bedolido  was killed  in the city on 19 June 2010.