COMMITTEE ON Public Information Chairperson Jorge T. Almonte and House FOI (Freedom of Information) champions and authors were scheduled to file the Committee Report on the FOI Bill with the Secretary General of the House of Representative last Wedneday, May 20, at 3:30 pm. However, at around 2:00 pm, Chair Almonte felt compelled to postpone the event, anticipating that the final vote on the BBL happening that afternoon will take longer than earlier expected. Chair Almonte and a number of FOI authors are members, ex-officio members, or deputized members of the House Ad Hoc Committee on the Bangsa Moro Basic Law and set to vote on the BBL.

We hope that the postponed filing of the Committee Report on the FOI Bill will happen at the soonest. The filing of the report is significant. It marks the shift of the FOI Bill from the committee level to the even more challenging work at the plenary level.

In spite of the advance of the FOI bill signified by the filing of the Committee Report, the reality is we lost important time arising from the delay in the filing of the committee report. The last three weeks since the resumption of session on May 4, and early next week when the BBL goes through approval by the Committee on Appropriations, would have been an opportunity to start sponsorship and interpellation of the FOI bill in plenary.

The Need for High Prioritization

This brings to light the importance of a measure being given high prioritization by the leadership of Congress and by the President. The impact of high prioritization on how a measure moves in Congress, particularly for major, controversial or resisted bills like FOI, is all too clear. We saw it in RH, in Sin Tax, and now in BBL.

We review the FOI’s road to getting to its present stage in the 16th Congress: 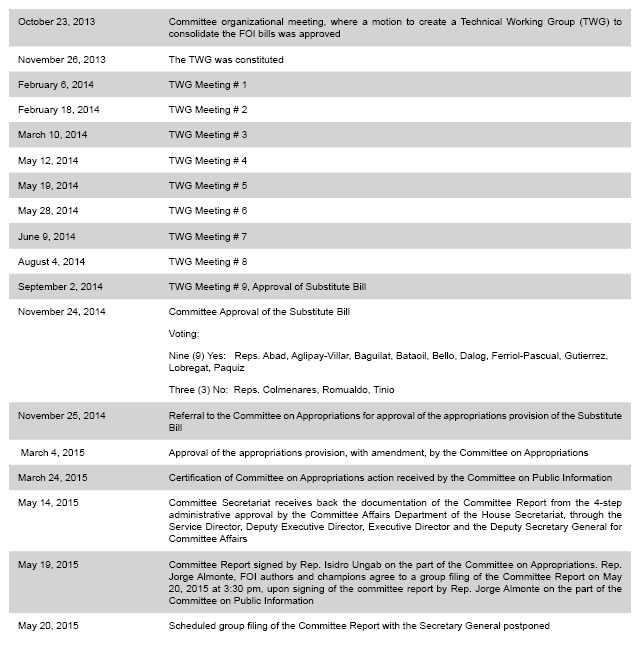 We attest to the hard work at the committee level of Chair Almonte, FOI authors and champion legislators and their staff, as well as of the advocates in getting the bill through the above process. We also attest to the committed and untiring support from the staff of the committee secretariat.

However, this is where high prioritization spells the difference. To be sure certain steps could have been speeded up if the passage of FOI is given high priority, similar to the bills we mentioned earlier.

Especially at this critical juncture when we approach the third and final regular session in a Presidential election year, the FOI bill cannot be just one of numerous priorities. It will take a very high level of prioritization and leadership if it is to finally pass.

By observation we are all familiar with the many mechanisms by which a high level of prioritization is conveyed: a high-level meeting, a phone call, adoption of a clear timetable, clearing-up of hold-ups and delays, mention at the State of the Nation Address, the President certifying to the necessity of immediate enactment, and ultimately, the House leadership putting the bill on the plenary agenda and mobilizing key legislators to move the process forward.

The coalition sees it a challenge for itself and concerned citizens to demonstrate a compelling strength to move our leaders to place the passage of the FOI Bill high in their priorities, as much as we see it a matter of accountability and question of leadership for the highest leaders of this country.

In our FOI Tracker # 1 assessing Congress action on FOI, we said that the bill was well positioned for passage, and in the Green Zone with a rating of 85.

With the delay in the filing of the committee report, and anticipating that the BBL will reach plenary given its prioritization, our appeal for the completion of sponsorship and start of interpellation before the June 11 adjournment has turned difficult.

Given this, the rating drops by 20 points to 65, and moves to the Yellow Zone.