IN THE hope that a collective response will rise from the public’s understanding of impunity and its impact on press freedom and democracy, CMFR organized the “Journalism Asia Forum 2010: Impunity and Press Freedom (JAF 2010)”  on the first anniversary of the Ampatuan Massacre last November 23.

The forum was part of a series of activities organized by the CMFR, which has been monitoring the killing of journalists in the Philippines since 1991, to commemorate the incident .

In his remarks, UN Special Rapporteur on the Promotion and Protection of the Right to Freedom of Opinion and Expression Frank La Rue said that “Impunity multiplies itself, (it grows) geometrically. Every case that is not investigated is an invitation for many more to occur.” 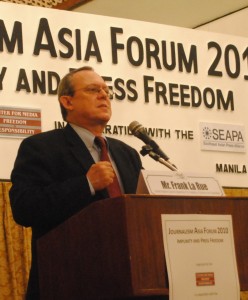 He emphasized the important role the State must take in ending the cycle of violence: “By not investigating a case (of human rights violations or killing of journalists), the State is giving the message that violence is acceptable.”

Human rights lawyer Jose Manuel Diokno described impunity as “the dark side of accountability.” He said “impunity is insidious. It eats at our reverence for life until we become numb to violence and inured to death. It tears at the very fabric of society by showing us that life is cheap, that fighting for justice is dangerous, and that those who kill in the name of the State are a law unto themselves.”

“It is during those darkest nights of our history as a people when evil, cruelty, and inhumanity are omnipresent with shameless impunity, when justice for victims appears to be most elusive, that the challenge of confrontation with those same authorities becomes extremely necessary,” said human rights lawyer Eric Mallonga. Mallonga is actively engaged in  child rights advocacy in the Philippines, among other human rights concerns. He discussed the available remedies for human rights violations in the forum.

The participants from the Philippines, Thailand, Indonesia, Malaysia, Vietnam, Cambodia, and Burma (Myanmar), and other speakers in the forum called for a more strategic and collective response that will confront not only the attacks and threats against the press and journalists but also the vulnerability of all citizens, especially those without the means to defend themselves.

CMFR analysis regards the culture of impunity as a consequence of  a conflict-ridden society in which the rule of law is weak, and  the judicial system ineffective. The failure of the State to punish  criminal and unlawful conduct undermines the basic assumption of the justice system that no one is above the law.

The Ampatuan (Maguindanao) Massacre was the worst attack on the press in Philippine history. On November 23, 2009, about a hundred armed men murdered 58 people including 32 journalists and media workers in  Ampatuan town, Maguindanao. The journalists were covering the filing of the certificate of candidacy of Esmael Mangudadatu  for governor of the province by his wife, sister and other relatives.

The Massacre provoked unprecedented outrage among journalist and civil society groups in the Philippines and abroad. But the attacks on press freedom and free expression are  still continuing.

About a month after the massacre, a gunman on a motorcycle shot a radio blocktimer in a Southern Philippine province. He died of multiple gunshot wounds and reports said the killing was politically-motivated. This year alone, eight journalists were killed; four of these murders were work-related. Fourteen incidents of threats and attacks against media practitioners also occurred in 2010.

One hundred eighteen journalists and media workers have been killed in the line of duty since 1986. While the Philippines used to have “the freest press in Asia”, it is now generally regarded as among the most dangerous countries in the world for journalists to practice their profession.

The shameful record of killings in the Philippines, most of them unresolved,  is not limited to journalists. Extrajudicial killings (of political activists, judges, lawyers, human rights workers and other citizens) and other human rights violations are also continuing, in addition to enforced disappearances, incidents of torture, arbitrary arrest and detention, and the displacement of communities.

Not only in the Philippines

The culture of violence and impunity does not  exist only in the Philippines. In Southeast Asia, a total of 246 alert reports on threats and violations of press freedom and free expression were recorded by SEAPA from 2009 to 2010, indicating the fragile state of press independence and practice, even in countries where the laws provide for press autonomy. 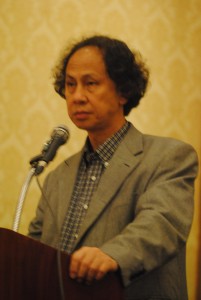 JAF 2010 provided the venue for a dialogue and a sustained exchange of ideas among those in the press. The event opened up perspectives to the larger frame of discussion beyond national boundaries and to strengthening international understanding of the cultural, political and social aspects of violence and impunity in different parts of the world.

The killing of journalists may not happen as frequently in Indonesia or Thailand as it is in the Philippines, but threats and attacks against press freedom and free expression do happen. Just like the trend locally, most of these incidents are more likely to happen in the provinces than in the cities. Journalists and/or media organizations become targets because of their work—they release information which authorities or powers that be do not necessarily want to be found out. 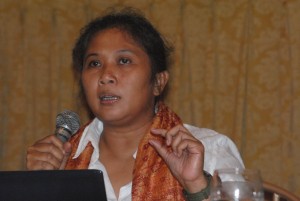 (Bina Bektiati, editor of the Indonesia-based newsmagazine Tempo, talks about how impunity also affects her country. Photo by Lito Ocampo)

Unfortunately, it is a common experience among these neighboring countries that the perpetrators go unpunished. They share the same challenges in prosecution: judicial delays, police brutality or incompetence, lack of forensic evidence and witnesses, and lack of funding to bring and support cases in court.

To put an end to the culture of violence and impunity, a number of initiatives are needed:

About 70 participants took part in the forum.  They also joined the commemoration program for the anniversary of the Ampatuan Massacre in Mendiola, Manila.

A consortium of funders through the Southeast Asian Press Alliance (SEAPA) made the event possible.