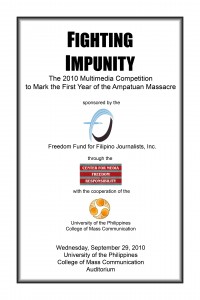 The Freedom Fund for Filipino Journalists (FFFJ), through its secretariat, the Center for Media Freedom and Responsibility (CMFR), with the cooperation of the University of the Philippines College of Mass Communication (UP-CMC), will launch on Wednesday, September 29 a multimedia competition to mark the first anniversary of the Ampatuan Massacre.

The competition is open to any college or university student who is currently enrolled. The heads of the communication programs of Manila colleges and universities together with two of their students have been invited to the launch, which will be at 10 a.m. at the auditorium of UP-CMC at Ylanan Road, UP Diliman Campus, Quezon City.  Other students interested in joining may also attend.

The FFFJ is a coalition of media and journalists groups founded in 2003 to address the killing of journalists. It provides legal and other assistance to the survivors of slain journalists, including scholarships to their children.

The Board of Directors of the FFFJ will be the Board of Judges. The FFFJ Directors are Jose Pavia of the Philippine Press Institute (PPI), who chairs the FFFJ; Melinda Quintos de Jesus of the CMFR, who heads the FFFJ secretariat; Reynaldo Hulog of the Kapisanan ng mga Brodkaster ng Pilipinas (KBP—the Broadcasters Association); Red Batario of the Center for Community Journalism and Development (CCJD); Malou Mangahas of the Philippine Center for Investigative Journalism (PCIJ); and Danilo Gozo of the US-based newspaper Philippine News.

The awarding of the winners will be held at a dinner on November 22, in ceremonies sponsored by the CMFR and the Southeast Asian Press Alliance (SEAPA), with ASEAN journalists in attendance.

November 22 is the eve of the first anniversary of the Ampatuan Massacre, in which 58 people including 32 journalists and media workers were ambushed and killed by some 100 men in Ampatuan town, Maguindanao. They were in a convoy led by the wife and women relatives of Maguindanao Governor Esmael Mangudadatu, who were on their way to the provincial office of the Commission on Elections to file then candidate Mangudadatu’s certificate of candidacy.

Although the killing of journalists has been going on since 1986, the Massacre was the worst incident of its kind in the Philippines. Some 200 people including former Maguindanao officials and policemen have been indicted and are currently being tried for planning and/or participating in the killing.

Entries to the competition may be submitted to the FFFJ Secretariat, c/o the CMFR, Ateneo Professional Schools, 130 H.V. de la Costa, Salcedo Village, Makati City 1227; or to the College of Mass Communication, Room 216, Plaridel Hall, University of the Philippines Diliman, Quezon City. The rules of the competition are in the CMFR website, but copies may be obtained at the CMFR office and the UP College of Mass Communication.

13 responses to “Fighting impunity: FFFJ, UP launch competition to mark the first year of Ampatuan Massacre”