CMFR/PHILIPPINES – The Regional Trial Court (RTC) of the City of Puerto Princesa ordered the arrest of the alleged mastermind and accomplices in the killing of broadcaster and environmentalist Gerardo “Gerry” Ortega last 27 March 2012.  Puerto Princesa is a chartered city in the province of Palawan, approximately 592 kilometers southwest of Manila.

Branch 52 Judge Angelo Arizala of the Puerto Princesa RTC issued arrest warrants against former Palawan Gov. Mario Joel Reyes, Coron town Mayor Mario Reyes Jr. and former Palawan provincial administrator Romeo Seratubias. But the court has yet to issue warrants against Arturo Regalado and Valentin “Percival Lesias” Lecias, both working for Joel Reyes and allegedly helped plan the killing of Ortega.  The gunman Marlon Recamata and others implicated (Rodolfo “Bumar” Edrad Jr., Armando Noel and Dennis Aranas) in the murder have confessed and are in the witness protection program. 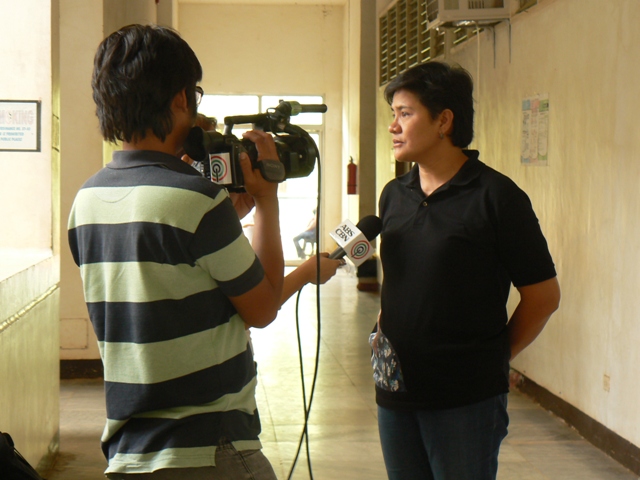 The issuance of the arrest warrants came days after the Department of Justice (DOJ) reinvestigating panel ordered the inclusion of the two Reyeses, Seratubias, Regalado and Lecias in the murder case currently being heard at Puerto Princesa RTC Branch 52.  Private prosecutor Alex Avisado told The Philippine Star last 15 March 2012 that the DOJ filed the Amended Information at the Puerto Princesa RTC on 14 March.

In its 27-page resolution dated 13 March 2012, the investigating prosecutors reversed the 8 June 2011 DOJ resolution dismissing the murder complaints against the two Reyeses, Seratubias, and security personnel  Regalado and Lecias. But it affirmed the dismissal of the charges against former Marinduque Gov. Jose Antonio Carrion.

The prosecutors said the additional evidence presented by complainant-widow Patria Ortega showed enough probable cause to file murder charges against the Reyeses, Seratubias, Regalado and Lecias. Widow Patria Ortega submitted records of the communication between Joel Reyes and Edrad who allegedly served as the liaison between the hired gunman and the former governor.  Patria Ortega also submitted recordings of Gerry Ortega’s commentaries against Joel Reyes which were aired over dwAR-Radio Mindanao Network.

DOJ Sec. Leila de Lima created the reinvestigating panel in September 2011 to “address the offer of additional evidence by the complainants, which was denied by the former panel in its Resolution of 2 September 2011 on the ground that an earlier resolution has already been promulgated prior to the filing of said motion, and such other issues which may be raised before the present panel.” (More info here: http://www.cmfr-phil.org/2011/09/14/new-panel-created-to-investigate-ortega-murder/)

De Lima ordered the Bureau of Immigration to include the Reyeses, Seratubias, Lecias and Regalado in its Watchlist upon the request of the Ortega family. In her urgent Memorandum dated 13 March 2012, De Lima directed Immigration Commissioner Ricardo David Jr. “to instruct all immigration officers to be on the lookout for the following accused, should any of them pass through the immigration counters in any of our international airports and/or seaports.”

Ortega, who was killed on 24 January 2011, was the second journalist killed in the line of duty under the Benigno “Noynoy” Aquino III administration. He was known for his environmental and anti-mining advocacies. He also worked for the ABS-CBN Foundation’s Bantay Kalikasan (Environment Watch). The trial against alleged gunman Recamata began in 2011.