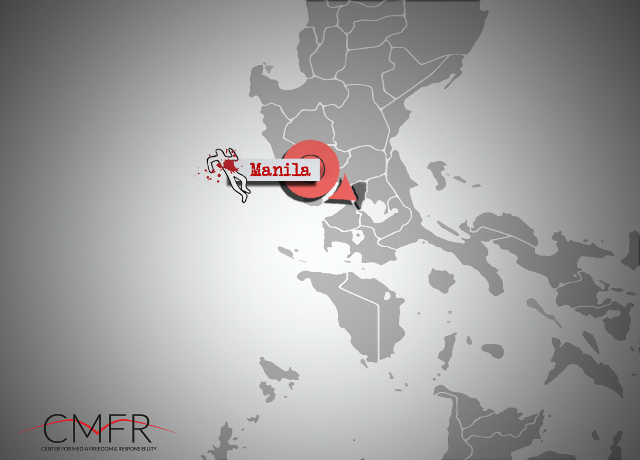 CMFR/PHILIPPINES – A lone gunman shot dead a reporter for a weekly tabloid in Manila on 27 May 2016. The killing is the second incident of a journalist killed this year and only the seventh in the National Capital Region since 1986. Most of the journalists killed in the Philippines were based in the provinces.

Alex Balcoba, a reporter and columnist of People’s Brigada and an official of the Manila Police District Press Corps., was talking to a friend in front of the family-owned watch repair shop in Quezon Boulevard, Quiapo district at about 7:40 p.m. when the gunman approached and shot him in the head. The gunman then walked towards a parked motorcycle where his companion was waiting. The two fled from the incident.

Balcoba was rushed to the Jose Reyes Medical Center but died later.

The Manila police told CMFR that a task force has been created to investigate Balcoba’s killing. The investigators are currently corroborating different accounts from witnesses to identify the gunman.

While the police have yet to determine the motive for the killing, they said that it might be business-related. But the police are not dismissing the possibility that the reporter’s killing was because of his work.

If proven work-related, the killing of Balcoba will be the 152nd case of a journalist killed in the line of duty in the Philippines since 1986, and the 31st during outgoing president Benigno Aquino III’s six-year term.