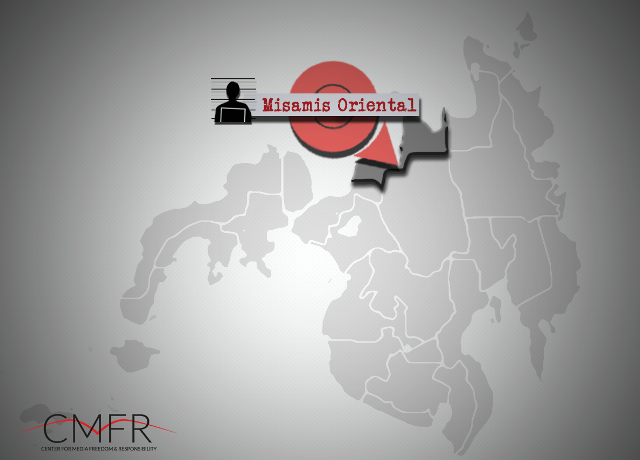 CMFR/ Philippines- A radio blocktimer was convicted of libel while a local radio station was ordered to stop operations in Gingoog City, Misamis Oriental. Misamis Oriental is 1389 kilometers south of Metro Manila.

Investigators of the National Bureau of Investigation in Northern Mindanao arrested on 20 February 2016 a local broadcaster who had been convicted of libel. Ronnie Waniwan, program director and commentator of dxBL Mellow Touch, was attending a doctoral class at Grand City Hotel in Cagayan de Oro when he was arrested. The arrest was based on a libel charge filed by retired Senior Police Officer 4 Tito Buadlart in 2009. Judge Giovanni Navarro of the Regional Trial Court (RTC) Branch 27 in Gingoog City ordered the arrest of the reporter on February 15 following the conviction of Waniwan.

Waniwan is currently detained at the Gingoog City jail.

NBI Northern Mindanao regional director Angelito Magno told CMFR that Buadlart was a former security man of one of the famous political families in CDO.  Waniwan is running for an elective post this May 2016 elections.

In a separate incident, the National Telecommunications Commission (NTC) has ordered the closure of Beat Radio 98.9 after a complaint from Misamis Oriental Vice Gov. Jose Marie Pelaez.

Pelaez said in a report in the Mindanao Goldstar Daily that the radio station has been attacking him in its commentary programs so he asked NTC if the station has a permit to operate.

The NTC said that the station has been operating without provisional authority. The NTC has directed the Beat Radio to appear within 15 days before the commission to explain its side.  Its failure to appear or file an answer resulted in the order for its closure.

Beat Radio is still operating as of press time.