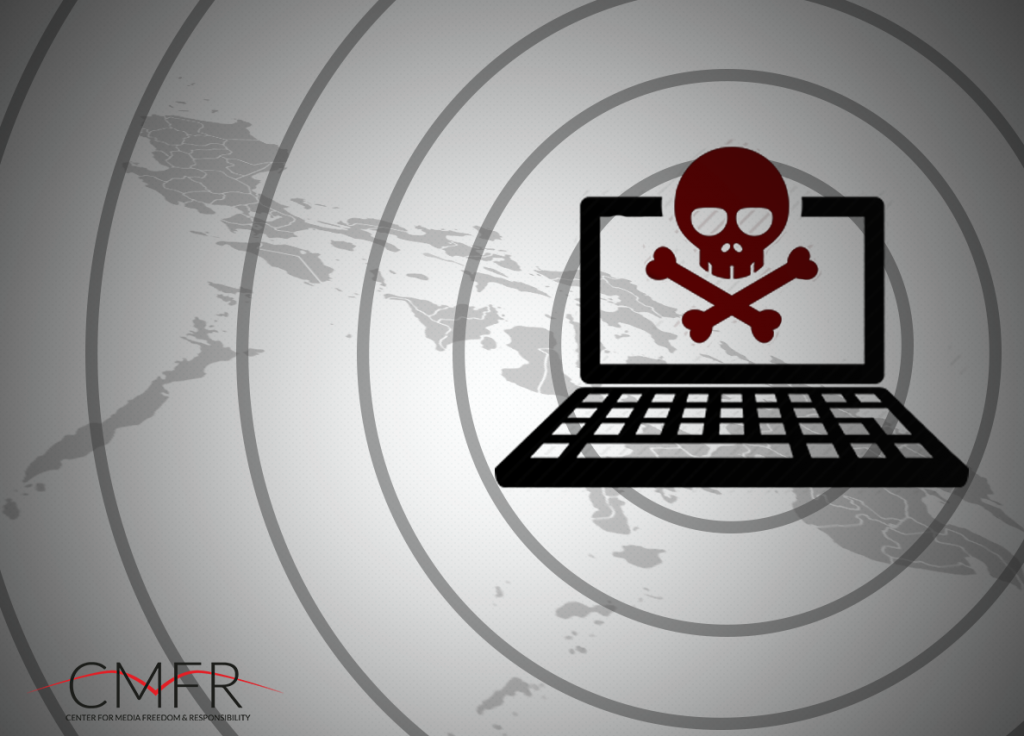 IT STARTED even during the campaign. Journalists critical of anything about then candidate Rodrigo Duterte were savaged on social media and it has not stopped.  Duterte’s defenders rain specific threats, rape, murder and libel suits, including harm to members of the journalist’s family.

The latest victims of cyber bullying are Manny Mogato and Karen Lema of the British news agency Reuters, who were accused by Duterte partisans of distorting his controversial “Hitler” comments. Lema and Mogato wrote on Sept. 30 the Reuters report “Philippines’ Duterte likens himself to Hitler, wants to kill millions of drug addicts.” The article discussed Duterte’s remarks before the media during a press conference in Davao City after his visit to Vietnam in which he told reporters that critics had been portraying him as “some cousin of Hitler,” that he would be happy to “slaughter” three million drug addicts, and that “At least if Germany had Hitler, the Philippines would have, you know, my victims.”

The report, which was also aggregated from Reuters by at least two online news sites, received a lot of negative feedback from supporters of the President.  An online mob of angry Duterte followers deluged social media with memes, comments and other posts calling the journalists “malicious and irresponsible,” “blunderers” and “attention-seekers” among others.

The pattern of online mobs criticizing journalists is not new. Journalists, among others, have been harassed online for their stories since the internet and social media were invented.  Pointing out what’s wrong with a report should be welcomed since it can contribute to the rational discussion of relevant issues.  But calling journalists names and threatening them with physical harm is more than just another form of bullying, which in itself causes enough harm.  Hate speech against journalists is a direct attack on the framework of democratic discourse as it flouts the rules of civic debate and exchange.

Al Jazeera correspondent Jamela Alindogan-Caudron, who has been reporting on President Duterte’s anti-drug campaign and clashes between the Armed Forces of the Philippines (AFP) and the Abu Sayyaf Group (ASG), was also attacked by online Duterte partisans.  Alindogan-Caudron and Malalad were called names such as “traitor,” “bayaran” (paid journalist) and “presstitute.”  Some comments even suggested that the two journalists should be raped or killed by the ASG, for their reports. The ASG has been notorious for the violent treatment of their victims.

These are just a few instances of journalists being insulted and even threatened over social media.

On Sept. 22, President Duterte addressed concerns that have been raised over some of his supporters’ online tirades.  “I appreciate very much your support and – how would I say it – enthusiasm to back me up…You are correct. I am doing nothing wrong,” Duterte said. “But of course, we should also not threaten people because they won’t be able to write about the truth.” However, his supporters seemed to have missed this appeal as the threats have continued.

Since 1986, 152 journalists have been killed, many after receiving death threats, and scores harassed and physically assaulted, for reporting and commenting on such issues of public concern as corruption and criminality. In this country, violence against journalists is real and it goes unpunished,  as often,  it involves those who have power in local communities.

As journalist and media advocacy groups have learned from bitter experience, any threat of physical harm against journalists must be taken seriously.  Such threats have in many instances been the prelude to journalists being killed and constitute a grave peril to the constitutionally protected right of the press to perform their mandated tasks of providing news and commentary.

A Rappler article by Maria Ressa “Propaganda War: Weaponizing the Internet” noted the pivotal use of the social media in the Duterte campaign for presidency.  The management of social media allowed the wide use of content to promote the candidate and to suppress criticism against him. Just two months after Duterte assumed the presidency, the same machinery was used for propaganda and threats.

The intimidation of journalists amounts to online terrorism that also detracts from the reasoned discourse needed in a democracy.  CMFR recognizes the power of social media to expand the arena of debate and exchange, to enhance through unfettered expression the impact of ideas that mobilize progressive movements.  It decries the use of these same instruments to amplify a campaign to suppress free and fair criticism of elected leaders.

We call for more than a token attempt on the part of the administration to rein in its supporters’ unconscionable attempts to demonize even some of the most seasoned media practitioners in this country whose only offense has been to report the truth.