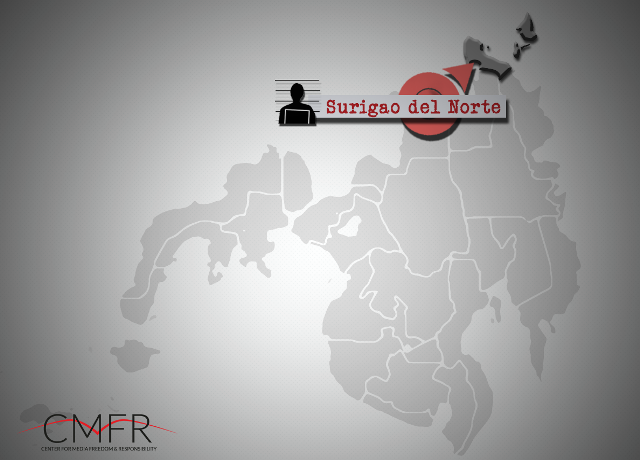 CMFR/PHILIPPINES – A candidate for mayor of Dapa, Surigao Del Norte has filed libel charges against several local journalists over a report on her supposed “swindling” of the residents of a barangay (village) in Surigao del Norte province. Surigao del Norte is approximately 1146 kilometers South of Manila.

Businesswoman Elizabeth Matugas filed a libel complaint against Pinoy Balita’s publisher Edito Mapayo, editor-in- chief Jun Ramirez, and editor Paul Boncaros before the Surigao City Prosecutor’s Office on 22 March 2016. The libel charge was based on a news report in the weekly newspaper’s February 8 to 14 issue which alleged that Matugas has not been paying the owners of several lots in Mt. Patag, Barangay Jubgan, San Francisco, Surigao del Norte where she operated a small-scale mining firm in 2014.

In her complaint, Matugas accused the journalists of “conspiring and confederating with each other, knowingly, intentionally, and feloniously, with intent to discredit or cause dishonor or contempt” on her. Matugas further wrote in her complaint that “the wicked article of the respondents portrayed me as a villain, a swindler and a cheat…The ignominy of it all is the fact that I was not even involved in the supposed illegal transactions.” The businesswoman also claimed that the report on a “trivialized alleged event” that transpired in 2014 was obviously meant to discredit her in the coming elections.