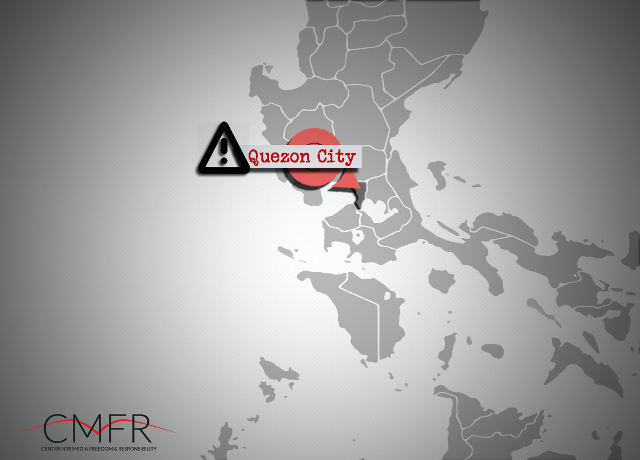 CMFR/Philippines – A journalist received death threats while waiting for his libel case to be heard in the Quezon City Prosecutors Office on 23 November 2016.

Pangasinan-based The Manila Times reporter Jaime Aquino was waiting in Room 430 of the QC Prosecutors Office when the complainants in his libel case, Joseph Lagua and Noel Acutayan, who were accompanied by three bodyguards, threatened him. Lagua and Acutayan filed libel charges against Aquino for his article, “3 face robbery-extortion raps” in which he described them as leader and members of a “Manila-based syndicate engaged in mulcting businessmen, politicians and even police officers using their alleged media connections and ties with some top Philippine National Police (PNP) officers in Camp Crame in Quezon City.”

According to an email from the newly-formed Presidential Task Force on Media Security (PTFoMS), one of the complainants’ companion said “sisipain ko yan!”, and was about to kick Aquino but he was held back by Acutayan. Acutayan then told his companion that someone was already waiting to kill the journalist. Lagua asked Acutayan to call the supposed killer so that Aquino may know him.

A man in a black jacket arrived soon after and took photos of Aquino. Lagua supposedly instructed the man to make sure Aquino is dead before the day ends.

Aquino reported the incident to the PTFoMS, which coordinated with the Quezon City Police District (QCPD) to assure his safety.

SP04 Roberto Collado of Police Community Precinct-5 confirmed that the incident did happen. The police officer said the assailants were no longer in the vicinity when they arrived. The police accompanied Aquino to QCPD 10 to file a blotter report and escorted the journalist to the Northern Luzon express way so he could go home to Pangasinan.

The police offered to assure the safety of Aquino in the next hearing of his case.

CMFR contacted The Manila Times and the news organization confirmed the incident but said Aquino was not available for interview as he is based in Pangasinan.