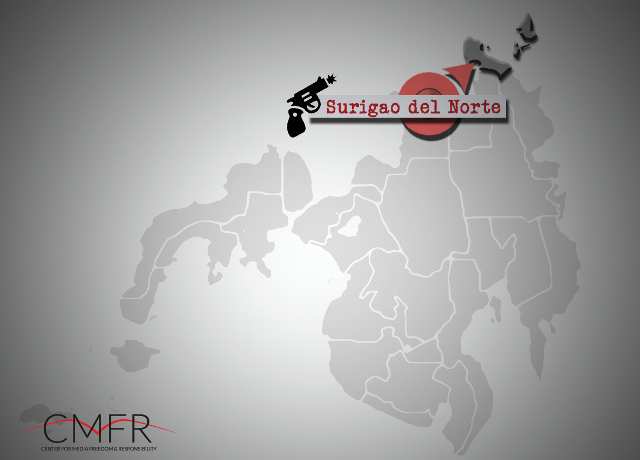 CMFR/PHILIPPINES – Two men on a motorcycle wounded a broadcaster and his 12-year old son in Surigao City on 30 June 2016. Surigao City is 1095 kilometers south of Manila.

DxRS-Radio Mindanao Network’s (RMN) broadcaster Saturnino “Jan” Estanio and his son, a grade six student, were unloading goods from their car in front of their house at Sitio Bioborjan, Barangay Rizal, Surigao City when a motorcycle passed by and the riders fired shots at them. Estanio sustained three gunshot wounds in his back while his son sustained one. Both survived the attack.

The broadcaster drove to Surigao Medical Center to seek treatment.

RMN program director Jocelyn Ferol told CMFR that Estanio saw the men still firing while they were driving away. The incident has been reported to the police and composite sketches of the gunmen already made.

According to Ferol, the police are still looking at different angles. One is Estanio’s feud with a neighbor who got jailed for grave oral defamation and child abuse charges. The police also said that the slay attempt might be because of his work as a broadcaster. Estanio recently criticized the alleged gambling activities of businessmen in their city in his program Radyo Alerto aired over dxRS-RMN from Monday to Friday, 6:00 to 7:00 pm.

The slay attempt happened few hours after President Rodrigo Duterte was sworn in as the 16th president of the Philippines.