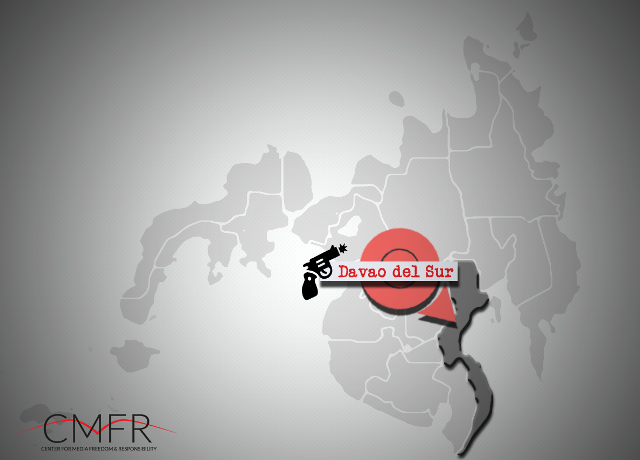 Armed men fired shots at the residence of blocktimer Marlan Malnegro in Tres de Mayo, Digos City. Malnegro and his family heard “a loud bang” at about 1:40 am and discovered that the window pane in their house was broken. Later, Malnegro’s wife found .45 caliber pistol slugs and discovered that the bullets also hit their car. They immediately reported the incident to the police.

Malnegro hosts a blocktime program in Gold FM which airs daily from 6:00 am to 7:00 am. In Philippine broadcast practice, “blocktimers” buy “blocks” of radio or TV airtime for their programs, which they market to sponsors and advertisers.

The broadcaster believes that the act of intimidation was because of his work as a journalist. A report in Mindanao Gold Star Daily quoted Malnegro : “I am just doing my job as a journalist. It is an act of cowardice aimed to stop me from disclosing wrongdoings in the community whoever they are.”

This was not the first time that Malnegro has been harassed. On 1 March 2009, Malnegro was threatened by a congressman in Digos City. The congressman said, “Bantay lang na si Marlan inig abot nako diha, piti gyud na siya (Marlan should watch out, he might get hurt when I come home).”

On 25 October 2007, Malnegro along with fellow Radio Ukay broadcaster Ruben Oliverio also escaped an ambush by a motorcycle-riding gunman. The incident happened about 200 meters from their place of work after the two broadcasters had just finished their radio programs. Malnegro told CMFR the attack was “politically motivated,” triggered by the then ongoing campaign for village elections. Police in Digos City also said the attack may have been related to the two journalists’ work.