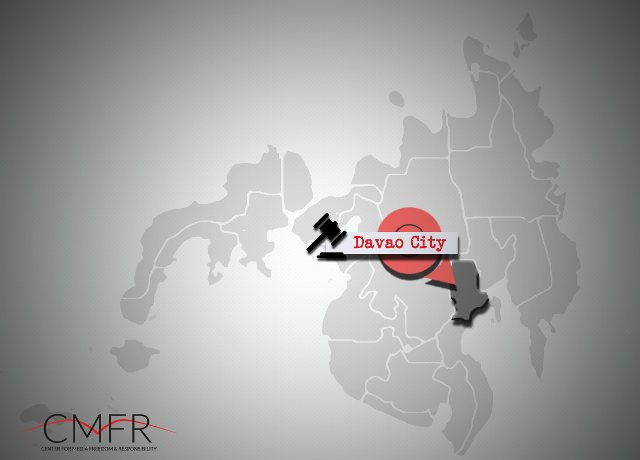 CMFR/PHILIPPINES – The Davao City court convicted of murder with treachery last 27 June 2016 a police officer accused of the killing of broadcaster Desiderio Camangyan.

Branch 10 Judge Retrina Fuentes of the Regional Trial Court of Davao City sentenced Dennis Lumikid to the penalty of reclusion perpetua or a maximum of 40 years imprisonment. The court also ordered Lumikid to pay Php 75,000 for the death of the broadcaster, Php 50,000 in moral damages and Php 30,000 in exemplary damages.

On June 14, 2010, Desiderio Camangyan, accompanied by his live-in partner Ruth Matinong and their young son, had gone to a small barangay in Manay, Davao Oriental to join in the celebration of a fiesta. The village chief, Romeo Antoling, requested the broadcaster to host a singing contest. While the contest was ongoing, a gunshot felled Camangyan.

Camangyan was one of the three anchors in the blocktime program “Hotline Patrol” aired over Sunrise FM station in Mati City, Davao Oriental. Davao Oriental is approximately 1,021 kilometers south of Manila.

There have been 152 journalists killed in the line of duty in the Philippines since 1986. Camangyan’s case was the 16th to have been partly resolved with the conviction of the gunmen. Only in the Marlene Esperat, Gerry Ortega, Herson Hinolan and the 2009 Ampatuan Massacre trial have suspected masterminds been prosecuted.