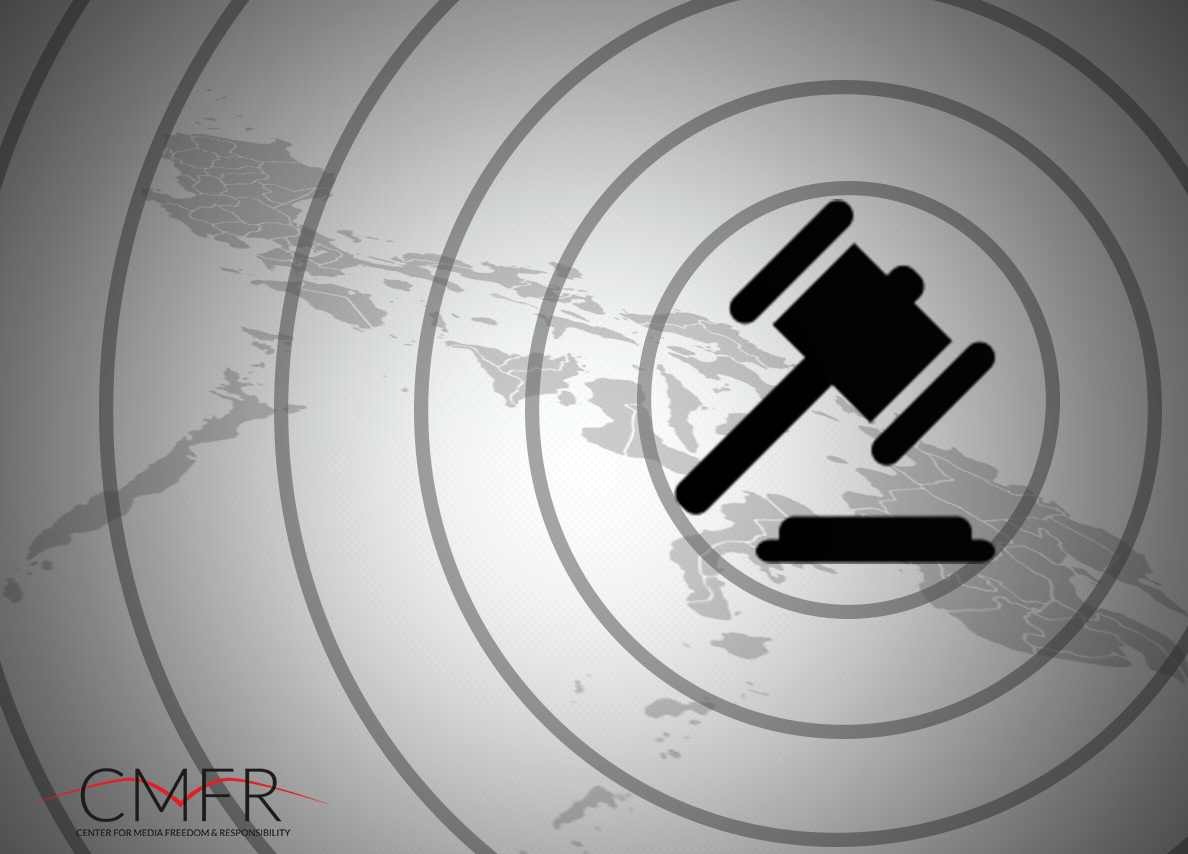 LEGAL TUSSLES in one week involved several journalists. Three newsmen were charged with libel.  A libel case was dismissed. And a news team posted bail to avoid arrest in the Philippines for libel.

Libel is still a criminal offense in the Philippines despite calls for its decriminalization. In October 2011, the United Nations Human Rights Committee urged the Philippine government to review its 84-year-old libel law which it described as “excessive.” CMFR and journalists’ groups have been urging the decriminalization of libel for nearly two decades.

According to a Facebook post by Formaran on August 15, Lucena City Regional Trial Court (RTC) served all three a total of  3,000-page subpoena for libel. Formaran said in the same post that the charges have yet to include those filed by the governor’s mother in Makati and others filed by their allies. The journalist said that the subpoenas were not sent to them and he had to pick them up from the prosecutor’s office himself.

In another post on August 16, the senior news correspondent said he filed a motion for judicial determination of probable cause with prayer to return the case to the prosecutor for reinvestigation on August 15.  He also posted bail of PHP 20,000 for one of the charges filed against him.

Radio broadcaster Cirse “Choy” Torralba was cleared of libel charges filed in 2005 by Wellington Lim, brother of businessman Peter Lim. Peter was identified by President Rodrigo Duterte as one of biggest drug lords in the Philippines.

Torralba anchored a commentary program in dyAR Angel Radio at the time he was sued.

According to a report in Cebu Daily News, Cebu City RTC Branch 16 Judge Sylvia Aguirre-Paderanga granted the broadcaster’s plea to dismiss the case. The judge cited the prosecution’s failure to present evidence and the inconsistencies in the testimonies of the lone witness as the bases of the decission.

ABS-CBN News broadcast journalist Ted Failon and three of his staff posted bail on 15 August 2017 after a court in Tagaytay found probable cause to indict them for libel. The charges were filed in 2014 by former Metro Manila Development Authority (MMDA) Chairman Francisco Tolentino after the broadcaster discussed questionable MMDA purchase of 18 motorcycles for the Pope’s Manila visit in 2015. The story, aired in the current affairs program Failon Ngayon, was based on a Commission on Audit report.

Tagaytay is 67 kilometers south of Manila.

According to a report in ABS-CBN News website, Failon’s camp earlier appealed to the Department of Justice (DOJ) to transfer the case to a different court since Tagaytay is Tolentino’s “bailiwick.” Tolentino served as mayor of Tagaytay for nine years. He was appointed in MMDA by Former President Benigno Aquino III in 2010. Tolentino lost the senatorial bid in 2016 and is now Duterte’s political adviser. The DOJ has yet to respond to the appeal.

In Media Times 2016, CMFR noted that criminal libel remains one of the most frequently used ways to silence the free press in the country. There were five libel related cases reported to CMFR in 2016. Four libel suits were filed against journalists in 2016, two have led to arrests. One journalist was arrested for a 2015 libel charge.