Disbarment
Mangudadatu lawyers Gemma Oquendo and Nena Santos, together with the FFFJ, have filed a disbarment complaint against Ampatuan lead lawyer Sigfrid Fortun. In their complaint, the group alleged that “Respondent Atty. Fortun had astutely embarked in an untiring quest to obstruct, impede and degrade the administration of justice by filing countless ancillary motions and initiating suits based on imaginary causes of action, all in the hope of burying the principal issue of his clients’ participation or guilt in the murder of 57 people that ill-fated day of 23 November 2009.”

One of the incidents cited by the group was Fortun’s claim during a hearing in early 2010 that his client Unsay could not understand Filipino or English. But Unsay was later interviewed by TV networks in Tagalog, and was able to speak that language fluently. Fortun, said the group, was in violation of his lawyer’s oath and of Canon 1 and Rules 1.01 and 1.02 of the lawyers’ Code of Professional Responsibility. Canon 1 states that “A lawyer shall uphold the Constitution, obey the laws of the land and promote respect for law and for legal processes.”

“A lawyer who knowingly lies through his teeth using his legal knowledge even though the same is to further his client’s cause is a clear and present danger to the rule of law and to the legal system; he tarnishes the integrity and dignity of the bar, even as he betrays all the good that the legal profession stands for,” said the complainants.

Missing
If the number of those killed has been variously said to be 57 or 58, it is because one of the journalists is still listed as missing. The family of Reynaldo “Bebot” Momay is still looking for his body. But Momay’s daughter Ma. Reynafe Castillo continues to attend hearings on the Ampatuan Massacre case even if the government has not listed her father among the murdered journalists. Under Philippine laws, a missing person can only be declared legally dead after four years. Only 57 charges of murder have thus been filed against the Ampatuans and their henchmen. 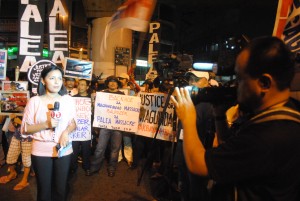 (A reporter covering the Nov. 23 rally. Photo by Lito Ocampo)

During the Journalism Asia Forum 2010 (JAF 2010) last November 23, lawyer Jose Manuel Diokno said the police should continue to investigate Momay’s case. “Do they have an open case filed on him? Because since he’s not part of the existing case, they should continue the investigation as far as he’s concerned. Because no prosecution can proceed unless it arises from some kind of investigation (and) some evidence is uncovered,” Diokno said.

“I think both the police and the Commission on Human Rights should start an investigation specifically into his case.”

The Momay family agrees and is in fact urging the police and other government agencies to look for Reynaldo. Castillo has also asked news organizations to use the number 58 when reporting on the number killed in the Ampatuan Massacre.

Ranking down
The Philippine ranking in several press freedom indexes has fallen further as a result of both the Massacre itself as well as perceptions that the slowness of the process of bringing the perpetrators to justice could even harden the culture of impunity. During the JAF 2010, United Nations Special Rapporteur for the promotion and protection of Freedom of Opinion and Expression Frank La Rue said that the Philippines now has the most number of journalists killed in the world. (CMFR has recorded 118 work-related killings in the past 24 years—an average of five killings a year.) 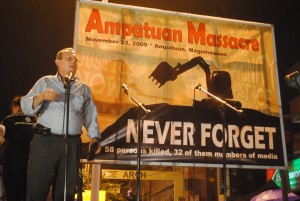 The Philippines is now in 156th place in the 2010 World Press Freedom Index of the Paris-based Reporters Sans Frontieres (RSF, Reporters Without Borders), 34 places down from its 122nd rank in 2009. RSF cited the Philippines as one of the countries whose “rankings dropped due to a breakout of serious violence.” RSF also said in its October 20 news release that “(d)espite a few murderers of journalists’ being brought to trial, impunity still reigns in the Philippines.”

In the Committee to Protect Journalists’ Impunity Index, the Philippines is the only country with the most journalists killed in peacetime and the least number of cases against the perpetrators successfully prosecuted.

Media Safety
As a consolation of sorts, the Ampatuan Massacre made the press community more aware of the issues of safety and security.

Rowena Paraan, then treasurer of the National Union of Journalists of the Philippines (NUJP), said in a Nov. 18 forum that the Massacre also shattered some commonly believed notions of safety—for example, that there is safety in numbers—and has thus taught journalists a number of lessons.

The awareness has been demonstrated by the increase in the number of safety training wprkshops, seminars and other activities in the press community. On the anniversary of the Ampatuan Massacre, in fact, the International News Safety Institute (INSI) and the NUJP held separate discussions on media safety.

On Nov. 23, together with the Center for Community Journalism and Development and Peace and Conflict Journalism Network, INSI held a conference on safety involving representatives from the media and other sectors. The participants were said to have drafted an 11-point agenda to ensure the protection of journalists and media workers.
The NUJP meanwhile organized on Nov. 22 a risk-mapping forum, where journalists from around the country were asked to identify the places where journalists were most at risk.

The massacre has also resulted in a more organized and united media front. Media organizations continue to report on the massacre regularly, and have been working together to push for reforms in both the press community (e.g., emphasizing ethical practice) and the government (e.g., dismantling private armies) to help prevent a repetition of the Massacre.

ACTION NEEDED
The victims’ families and press organizations have expressed their hope that the Massacre would not be one more unresolved case among hundreds, given President Benigno Aquino III’s pledge to support its resolution.

Less than two months into his term, Aquino’s Communications Group met with the FFFJ and the NUJP to discuss how the government could help reverse the culture of impunity in the killing of journalists. Among the measures discussed were the strengthening of the state-run Witness Protection Program, capacity-building for forensic experts in the police and military, and the creation of a multi-sectoral Quick Response Team.

6 responses to “THE AMPATUAN MASSACRE: Mourning, Disappointment and Hope”