A YEAR has passed since the mass murder of 52 men and women including 32 journalists and media workers, but the trial of those accused of the foul deed has not even begun.

Thirty-two journalists and media practitioners were with the wife and relatives of a local politician to file his certificate of candidacy (CoC) in Shariff Aguak, Maguindanao last November 23. 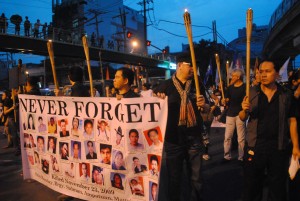 (Members of the Philippine media in a protest staged in commemoration of the Nov. 23, 2009 massacre in Ampatuan town, Maguindanao. Thirty-two journalists were killed in what is considered as the single worst attack against journalists in recent years. Photo by Lito Ocampo)

At around 10 a.m. of Nov. 23, 2009, the 32 journalists and 26 others including those who just happened to pass by (among them a couple on their way to a hospital and a government employee on his way to work) were murdered in Sitio Masalay, Barangay Salman, Ampatuan town, Maguindanao in the worst case of political violence and attacks against journalists in Philippine history.

The case was brought to court in December 2009 but has since moved at a snail’s pace. The prosecution of the 195 accused persons (previously 197) has been a test of patience and endurance for the families, their lawyers and others helping them.

Delays
A slew of technical complications has delayed the trial, among them the rules governing motions for bail, and six motions demanding that the presiding judge inhibit herself from trying the case.

As of this December, the trial of Unsay Ampatuan has been limited to hearings on his petition for bail after the court ordered the consolidation of his September motion for bail with his earlier petitions. His father Andal Ampatuan Sr., cousin Zaldy Ampatuan, and Sajid Islam Ampatuan have filed separate petitions for certiorari before the appellate court, and are yet to be arraigned at the local court.

Press freedom organizations like the Freedom Fund for Filipino Journalists (FFFJ) have suggested reforms in the criminal proceedings and Rules of Court to the government. “Many of the rules governing court proceedings …were put in place 50 years ago and need to be amended, or thrown out all together. Under existing conditions, the trial of the accused could take a decade or more,” the Center for Media Freedom and Responsibility (CMFR), a member of FFFJ and its secretariat, said in a statement last Nov. 23.

Vulnerable
The slowness of the proceedings has made the families of the victims, their lawyers, and the witnesses vulnerable to attacks and bribes.

Some families, for example, have disclosed attempts to bribe them into withdrawing from the case. Aquiles Zonio, one of the reporters who decided not to proceed to Shariff Aguak on the day of the Massacre, said last Nov. 18 during a forum at the University of the Philippines College of Mass Communication that he has been receiving death threats since last year. Some policemen who have issued statements on the involvement of the Ampatuans in the massacre have allegedly been maltreated and threatened even while in detention.

6 responses to “THE AMPATUAN MASSACRE: Mourning, Disappointment and Hope”