So what’s new on TV?

Although it wasn’t admitting being threatened by Willing Willie’s ratings, GMA-7 ads for 24 Oras claimed that the network was banking on Mel Tiangco and Mike Enriquez’ credibility, given what it said was audience preference for news rather than entertainment. 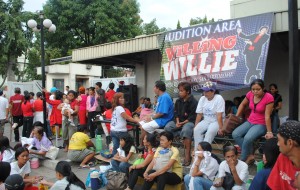 (People lining up to audition for one of Willing Willie‘s segments. Multi-million peso deals with advertisers, and not philanthropy, make it possible for Willie Revillame to give out money to people pinning hopes on the TV5 program. Photo by Lito Ocampo)

Threat
That may be true so far, but that doesn’t mean it won’t change. The media after all shape audience tastes and habits, and the problem with using a variety show to increase audience share at the expense of news programs is that it predisposes an already under-informed public to view entertainment over the news.

The Kapisanan ng mga Brodkaster sa Pilipinas (KBP, Association of Broadcasters in the Philippines) Broadcasting Code of 2007 mandates that “news shall be part of a station’s daily programming. No less than 30 minutes of daily programming should be devoted to news.” (GMA-7 withdrew its membership from the KBP on Sept. 2003 and is no longer bound by KBP injunctions.)

KBP does not impose a specific timeslot in which newscasts should air. But the early primetime slot (6 to 7 p.m.) has been reserved for newscasts on the assumption that people coming home from work want to watch the news first.

Public service?
Revillame, Soledad and everyone behind Willing Willie have claimed in their press statements and in interviews that Willing Willie is as much a public service program as the two news programs of TV5’s rival networks, and as mandated by its franchise. 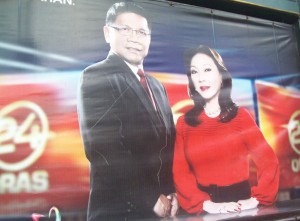 Section 4 of the broadcasting franchises last awarded to GMA-7, TV5 and ABS-CBN (Republic Act [RA] Nos. 7252, 7831 and 7966), respectively, as enacted by Congress during the first half of the 1990s) mandates that “The grantee shall provide adequate public service time to enable the Government, through the said broadcasting stations, to reach the population on important public issues; (and must) provide at all times sound and balanced programming…”.

Noted journalist and educator Danilo Arao, The Willing Willie “public service” claim can mislead people into thinking that, a game show whose main attraction is a daily dole-out, and in which cash assistance is extended for product promotion, is real public service (See “Willing Willie Wins, but…”, The Lobbyist).

It’s dangerous as well, says Newsbreak’s Chay Hofileña. Willing Willie’s ratings dominance over the newscasts “could start the trend toward the further erosion of news and public affairs shows” which inform and empower and are therefore “genuinely motivated by public service.” (See “Entertainment vs. News” Nov. 18) “Its (Willing Willie’s) success would spell the triumph of commercialism over the desire to preserve the role of news as informant, educator, and builder of communities. If news loses its hold over primetime, who else will watch it?”

The pressure to rate, noted Christopher Po of the online Philippine Entertainment Portal, has forced the two major stations to bow to the pressures of competition by providing more “entertaining” elements, gory police reports and juicy gossip in several installments in the newscasts just to keep the audiences from switching channels (“Willie Revillame’s ‘new’ show attempts to shake up the local TV landscape“).”