So what’s new on TV?

In a move that surprised the entire television industry, a newly-reorganized TV5 pitted a variety show hosted by the controversial Willie Revillame against the flagship news programs of GMA-7 and Revillame’s former station ABS-CBN 2. The result: a stronger TV5 and a series of quick changes in the programming lineups of channels 2 and 7.

But TV5’s gambit is well within Philippine TV’s putting ratings (and revenues) ahead of everything else, including the public’s need for information. One possibility: its Willing Willie could entice audiences away from the news.

The network’s ratings soon picked up. On Nov. 8, Willing Willie tied with the GMA-7 news program 24 Oras (24 Hours) in AGB Nielsen’s Mega Manila Ratings (both were at 11.6) , putting ABS-CBN 2’s TV Patrol (at 10.8) third for the first time since it started. 24 Oras quickly claimed that it was the sole leader, based on average minute ratings. ABS-CBN also had a counterclaim, citing nationwide figures from Kantar-TNS (where Patrol rated 28.0, Oras 19.5 and Willie 14.5).

Willing Willie’s strong showing in Manila was first dismissed as the result of audience curiosity over the entry of Valenzuela councilor Shalani Soledad as program co-host. But what was initially perceived as, borrowing from television critic Nestor Torre, a “momentary distraction” has stirred so much curiosity that the distraction is slowly turning into a habit.

While the TV5 program continues to trail behind newscasts in nationwide ratings, Willing Willie has consistently rated second to 24 Oras on weekdays, and is number one on Saturdays in Manila. On Nov. 26, a weekday, it rated highest in its timeslot (9.8, compared to Oras’ 8.9 and Patrol’s 8.6). (TV5 announced Revillame’s show again rated number one on Wednesday, Dec. 8, at 10.8 compared to Oras‘ 9.9 and Patrol’s 9.2.)

This could give ABS-CBN another reason to be more determined in running after Revillame, its former, and putatively most prized, talent. After a series of attempts to get temporary restraining orders against Willing Willie’s airing and despite a pending breach of contract case, ABS-CBN on Nov. 26 filed a copyright infringement case against Revillame and TV5 after both allegedly “copied everything” but the title of the noontime show that Revillame had hosted for five years over ABS-CBN. 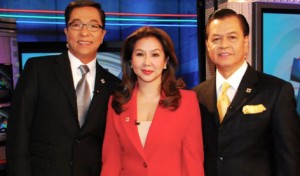 The TV5 gambit was what allegedly drove ABS-CBN 2 into rethinking its programming strategy. The most striking of recent changes is the return of Korina Sanchez and former Vice President Noli de Castro as TV Patrol anchors—on the same day that Soledad was launched as Revillame’s co-host. The much-hyped comeback of Sanchez and De Castro was supposedly aimed at reclaiming the duo’s image as broadcasting’s top news team, although some speculate that it was more a reaction to the threat from Willing Willie. Incoming ABS-CBN senior vice president for News and Current Affairs Regina Reyes however said the changes had long been “in the pipeline”. (In November, after six years in the network, Maria Ressa had resigned from the post Reyes, former ABS-CBN North America News Bureau chief, will officially assume in January 2011.)