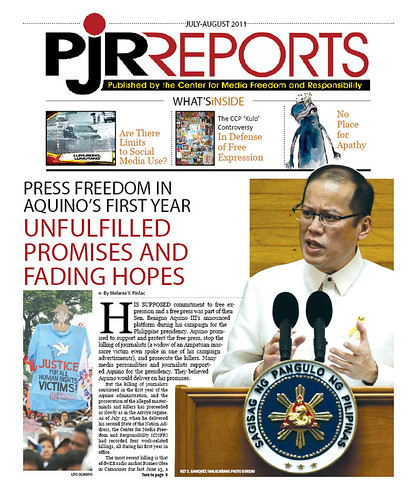 THE MEDIA whether old (print and broadcast) or new (blogs, online news, and social networking sites) were once again in the center of attention in July and August, as they had been a year ago during the Aug. 23, 2010 hostage-taking incident.

The attention was not necessarily public, being mostly limited to media students, critics, and some practitioners, and was not in the same category of disturbing behavior as that displayed by certain media organizations and practitioners during the hostage-taking crisis. But the reason for the attention was unsettling enough.

While covering the flooding of Metro Manila streets early in August, a GMA-7 news crew focused on taking footage of the predicament of University of the Philippines law student Christopher Lao, who drove his car into floodwaters so deep his vehicle stalled—and whose spontaneous reaction when interviewed was to ask why he had not been informed that the flood was that deep.

Once shown, the GMA-7 footage elicited a storm of comments in the blogs and social networking sites ridiculing Lao. GMA-7 apologized for the gaffe, while disingenuously insisting that it had not really focused on the Lao incident but had been mostly covering the floods, in tacit recognition that the Lao episode was a peripheral issue, the journalistic value of relevance being the dominant criterion of news coverage. Lao ended up apologizing for his reaction, apparently because he had become aware that he was being ridiculed and criticized for his question’s (Why was I not informed?) implicit claim to entitlement. But those who ridiculed him online would not be moved, most of the bloggers and Twitter and Facebook denizens insisting that they were well within their rights, implying that those rights were absolute.

This egregious example of plain sensationalism, complete with low level lighting to suggest that what was being covered was either illicit or criminal or both, was enough to ignite not only protests but also threats of physical harm not only against Cruz but also against CCP officials. The CCP took the exhibit down not because it accepted the argument from Church-connected groups that “free expression is not absolute” and which implied that being offended by an art work or anything else defines its limits, but out of fear of vandalism and their and the artist’s safety. Meanwhile, the usual suspects in the blogs, in Twitter and in Facebook, let loose the usual avalanche of insults, name-calling, and ridicule that passes for argument among the cyber terrorists who, while joining the free-expression-is-not-absolute chorus, proclaim that their right to abuse anyone is.

What disturbs is not only the precedent the CCP has established by buckling under the pressure from fundamentalist religious groups. The recklessness with which broadcast media provoked both the attacks against Lao and Cruz is similarly a matter of concern. But the misuse, abuse and debasement of the Internet as a vehicle of free expression by precisely some of those elements who claim that right, but who would deny it to others, is especially disheartening. It demonstrates the need for those who see the Internet as an authentic vehicle of informed and rational empowerment to put together an acceptable self-regulatory protocol, which, while not legally binding, would at least have the moral force to stop and prevent the further deterioration of Internet discourse.

Are there limits to social media use?
by Kathryn Raymundo

The media, bishops, and the missing “Pajeros”
by John Antiquerra

Reporting year one of the Aquino administration
by John Antiquerra

Palace draft of freedom of information bill
Focus on restrictions?
by Kathryn Raymundo

State witness and the Ampatuan massacre trial
by Melanie Pinlac

No place for apathy
by Ilang-ilang Quijano