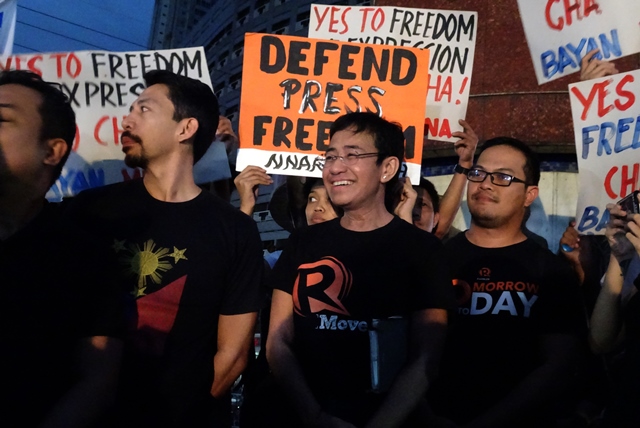 BREAKING NEWS carried the basics of a case that has since drawn the attention of international media and the global watchdogs of press freedom. The Securities and Exchange Commission (SEC) ruled that Rappler violated constitutional restrictions on ownership of mass media.On January 15, ANC and CNN Philippines broke the news at around 3 pm and 4 pm, respectively, following the wording of the SEC ruling.

In a press briefing held at around 5 pm of the same day, Rappler CEO Maria Ressa said that the issue stemmed from the SEC’s revocation of their articles of incorporation and the voiding of the Philippine Depositary Receipts (PDR), an investment instrument of Omidyar Network, a foreign investment firm. Rappler maintained that Omidyar Network is not an owner and not a shareholder. It holds investments in the company through the PDRs, which does not give them the right to intervene in the operations of the company.

Ressa added that the SEC ruling did not follow its own rules of procedure, as they were not given the opportunity to respond based on the findings. She said the move was a form of harassment by the administration, calling it a “blow to press freedom.”

After the Rappler briefing, primetime newscasts GMA-7’s 24 Oras and ABS-CBN 2’s TV Patrol reported that the SEC’s investigation showed that the PDRs Rappler issued to Omidyar Network contained provisions that allowed it to have some control over Rappler’s corporate affairs.

Print reports took the same track the following day, January 16, adding information picked up from the text of the SEC ruling. Quoting the SEC, reports said that the PDRs violated, in particular, the foreign equity restrictions in the Constitution, quoting SEC: “Anything less than 100-percent Filipino control is a violation. Conversely, anything more than exactly zero-percent foreign control is a violation.”

Manila Bulletin put it simply: “Because the SEC deemed that Omidyar Network has been granted control and financial returns through the PDR, it ruled that Rappler violated the Constitution.”(“SEC revokes Rappler’s corporate license“)

Print coverage drew the meat of reports from the SEC ruling, including the fact noted in the document, that in December 2016, the SEC received a letter from Solicitor General Jose Calida requesting an investigation into Rappler “for any possible contravention of the strict requirements of the 1987 constitution.”

Meanwhile, media organizations including the National Union of Journalists of the Philippines (NUJP), Foreign Correspondents Association of the Philippines (FOCAP) and the Philippine Press Institute (PPI) issued statements describing the development as part of a pattern of restricting criticism. Some senators also slammed the SEC decision, but Presidential Spokesperson Harry Roque said the president “found it unfair” that Rappler claims to be harassed.

The Philippine Star, Philippine Daily Inquirer, Manila Standard, Malaya and The Manila Times noted in their respective reports on January 16 that Rappler is known to be critical of the administration’s policies.

The Star and the Standard reports provided further context by recalling that Duterte began attacking Rappler in his 2017 State of the Nation Address, during which he said Rappler was American-owned. BusinessWorld mentioned this attack as well.

24 Oras (January 15) and TV Patrol (January 16) also said the allegation of foreign ownership is not new, replaying the clip of Duterte’s SONA in their reports.

In the evening of the January 16, the president told reporters he was not behind the ruling, since he did not even know who the SEC commissioners were, being appointees of his predecessor Benigno Aquino III. Carried in broadcast news, clips of the encounter showed a visibly irked Duterte saying that the issue was not about press freedom, but about the “abuse of the elite and those in power.” He called Rappler a “fake news outlet” whose articles were “rife with innuendos and pregnant with falsity.” Duterte also asked reporters, “Why should you complain if I am critical against media? Are you not critical of me?”

Broadcast programs engaged resource persons for further analysis of the issue. Still on January 16, CNN Philippines interviewed in its primetime news broadcast News Night sociologist Nicole Curato, who said that “legal procedures are never politically innocent.” Curato said questions need to be asked: “Why did this grab the attention of the Solicitor General? Of all companies that they can possibly ask the SEC to investigate, why focus on Rappler?”(“Breaking down SEC’s decision vs. Rappler“)

Also on January 16, TV Patrol interviewed UP professor and lawyer Marichu Lambino, who interpreted Calida’s approach as politically motivated. Lambino said lawyers in the bureaucracy might aim for higher positions after finishing their terms, so the argument about who appointed incumbent appointees does not matter. She also said that the SEC decision will have an effect on the operations of other media outfits. (“Ano ang nilabag ng Rappler kaya ito ipinasasara?“)

In its January 17 editorial, the Inquirer argued: “If the “repugnant provision” were truly unconstitutional, there are other remedies short of decertifying a news organization. And why choose to run short? Because as the Supreme Court has ruled again and again, freedom of the press is one of the fundamental basic rights necessary to a functioning democracy.” (“A pattern of harassment“)

Coverage picked up the strong reaction of media groups, commentators, and other sources interviewed that the order involved a press freedom issue. But it was less clear about the corporate regulatory questions. It took some time for the press to get experts knowledgeable in corporate regulation and constitutional matters to weigh in and help the public understand the whole scheme of PDRs as a legal instrument that could allow companies, including media companies with ownership restrictions, to access foreign investment.

The January 22 Inquirer column of Raul Palabrica, a former SEC commissioner provided an explanation of the PDR as an instrument recognized by the SEC: “Initially used by PLDT in 1988—dubbed then as Global Depositary Receipts and later American Depositary Receipts because the bulk of its investors came from the United States—this funding scheme has since been (and continues to be) used by, among others, ABS-CBN Corp., GMA Network, Inc., and Globe Telecoms, to raise capital from international sources.”  (“Misconception on PDRs”)

Palabrica discussed the implication of the SEC ruling for other businesses. He argued: “Going by SEC’s logic, mass media companies that have outstanding loans with foreign financial institutions, including Philippine banks with foreign investors, that contain provisions similar to the disputed clause may be in danger of losing their certificates of incorporation for violation of nationality rules. If this happens, expect nationalized Philippine companies to become pariahs in the international financial market.”

Lawyer Oscar Franklin Tan also argued in in his January 22 Inquirer column that the SEC must clarify that its decision on Rappler does not affect the “everyone else’s contracts,” using ABS-CBN and GMA as examples of media companies also using PDRs. (“SEC must clarify Rappler ‘kill order’“)

The corporate issues were handled mostly by lawyers. Tan said that “bizarre legal drafting” led to the SEC’s revocation of Rappler’s certificates of incorporation: “We must reassure other internet startups, which may make mistakes out of ignorance. Most importantly, we must reassure foreign investors by ending all talk of criminal prosecution under the Anti-Dummy Law. I disfavor rewriting corporate law using human rights law. But under both, no one should go to jail over bizarre legal drafting.”