The Dengvaxia Debacle: The Volatile Mix of Politics, Health and a Failure of Science 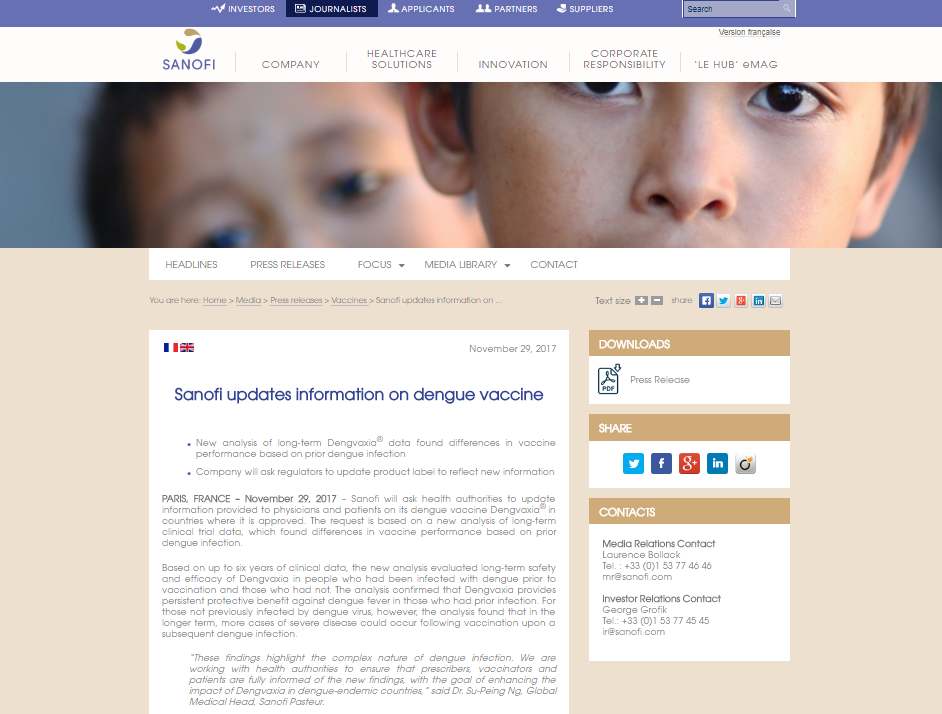 ON NOVEMBER 29, France-based pharmaceutical company Sanofi Pasteur posted on their website a warning about the risks of their anti-dengue vaccine Dengvaxia. Citing new findings, the company said: “For those not previously infected by dengue virus, however, the analysis found that in the longer term, more cases of severe disease could occur following vaccination upon a subsequent dengue infection.”

Primetime newscasts 24 Oras and TV Patrol included the advisory in their November 30 rundown, quoting the statement above along with a brief backgrounder on the Philippine dengue immunization program, recalling the concerns raised by studies and health experts.

Given more lead time, the newspapers failed to make an effort to expand on Sanofi’s advisory.

Sanofi made the announcement on their webpage, which probably did not reach too many of those who would have been panicked by the information. This sort of announcement would have raised all kinds of questions for a layman. Isn’t a vaccine supposed to be received by those not yet infected? What then was the purpose of the vaccine being made available for protection against dengue? Most important, what is meant by “severe dengue?” How endangered were those who were vaccinated who had not been previously infected with the disease?

Media did not make the effort to try and figure out what exactly the advisory meant. The issue was covered as breaking news and pieced together as critical actors released statements to explain and clarify.

This is the kind of news that needs to be explained. It is media’s responsibility to do the explaining—first, by interviewing someone in Sanofi to explain exactly what it meant; and then by getting other expert opinion to weigh in on various aspects of the issue.

Media reports two days after Sanofi’s notice featured anxious parents wondering about their children’s health and wellbeing. The Department of Health (DOH) during the Aquino administration launched its school-based dengue immunization program for Grade 4 students in public schools in the National Capital Region, Central Luzon and Calabarzon in April 2016.  This was spearheaded by then Health Secretary Janette Garin but media quoted her as also saying that the plans for the immunization program started with her predecessor, former health chief Dr. Enrique Ona.

Current Health Secretary Francisco Duque III acted promptly to announce on December 1 the immediate suspension of the vaccination program. Unfortunately, the DOH did not provide any more information to answer the questions listed above. The press conference showed that the department was taking immediate action to stop further vaccinations. But it did little to explain the level of danger as even the DOH did not have any more information than what Sanofi released.

Given the public’s susceptibility to panic and fear about disease and epidemic warnings, the press is obliged to get as much information about the dangers from the start, with reports carrying as much of the critical information early in the coverage. DOH should have concentrated on what the public should do in light of the advisory.

Answers to these questions, however, were slow to surface as the media passively waited for the information to come from critical actors, primarily the DOH and Sanofi.

With media’s dependence on talking heads, it took some time for issues to unfold.

For instance, it took days before media reports carried Sanofi’s description of “severe dengue”— referring to symptoms such as two-day fever, drop in platelet count and hematoma.  This point was made only during a December 4 press conference by Sanofi officials. At the same press conference, Sanofi also pointed out that the vaccine does not cause dengue. The disease is caused by the bite of a dengue-infected female Aedes aegypti mosquito. DOH Secretary Duque also made the same point during the December 1 press briefing, but this was not given emphasis in media reports.

Former Health Secretary Garin had pointed out that the DOH followed WHO’s recommendation to include Dengvaxia in the country’s immunization program. But WHO issued a statement on December 5, which said it only “outlined a series of considerations” that national governments must take into account.

A more proactive media would have gone to WHO sources as soon as the story broke; its institutional voice would have helped reflect the many perspectives in the complex issue. Instead, it took a whole week for the WHO clarification to make news.

Given the advisory, health reporters should have been busy seeking out sources such as health experts and other officials involved in the country’s national dengue and immunization program in order to provide a substantial discussion about the safety issues involved in the new vaccine.

Sidetracked by the search for culprits to blame, the exchange among sources sidelined the most important issues that should have drawn media’s primary attention: What is the level of risk and what should be done for those who are at risk of “severe dengue?”

In the same press conference announcing the program’s suspension, Duque had ordered the strengthening of DOH’s ongoing surveillance to monitor the condition of vaccine recipients, as well as the profiling of the former to determine who among them have had dengue prior to immunization. He said that DOH would coordinate with the healthcare providers, hospitals and DOH regional offices in the affected areas. Duque also clarified, among other things, that the so-called severe disease warned in the advisory will not happen in all cases, and that the vaccine still offers 30-month protective period. A helpline for dengue vaccine queries was set up by DOH on December 6.

However, media did not follow up with news accounts about how the process was actually implemented, which would have helped to evaluate the effectivity of the effort. Close media attention would have forced the DOH to make sure that the remedial implementation was reaching out to the people.

Politics and health are not a good mix. The same toxic effect was evident in the discourse.

As early as the initial press briefing with DOH, questions of liability were already raised by the media—a thread which lawmakers and some advocacy groups were eager to play up and media proved eager to report.

In an interview with ANC on December 8, Garin asserted that the plans for the dengue vaccination program had started during the time of her predecessor, Dr Enrique Ona. Ona countered that it was officials after his term ended in December 2014 who were “solely responsible” for the immunization program that used Dengvaxia. Instead of the exchange, media should have tried to review the record from other sources in the DOH to get the story on when the controversial vaccine actually began.

The Senate Blue Ribbon Committee featured more finger pointing as hearings continued on December 11 and 14. Legislators took turns to grill Garin and other officials. In the first hearing, committee chairperson Sen. Dick Gordon questioned how fast the budget for the vaccines was made available and hinted at possible conspiracy to hasten the vaccination program’s implementation. Garin reiterated the program was above board and that it was “not a midnight deal.” In the same venue, Garin once more pointed to Ona, under whose term, she said, the DOH was already eyeing the use of the vaccine as early as July 2015.

A separate hearing was also conducted at the House of Representatives on December 13 where Sanofi representatives, former Food and Drug Administration officials and health experts were invited to speak.

Live coverage is useful, but media cannot presume that everyone catches the important points. Neither the Senate nor the House touched on the gaps in health policy-making that could help avoid unnecessary haste in the inclusion of new vaccines. As with many important issues, the public could do with less politics in the discussion of controversial matters.

In this case, congressional hearings proved true to form and provided no conclusive findings nor proved helpful in providing a better understanding of the issues of vaccines and immunization. Congress did not ask about other means of protection against dengue itself.

TV news and print coverage were limited to simply quoting what everyone said.  As nothing that was said was really helpful, the public would not have missed anything if the media simply ignored the hearings for what they were—just more politics which did not promote public health.

Public health issues are among the most important concerns to be reported by media. These are of wide interest and, more often than not, touch on public issues relevant to everyone. These are difficult to report. Heath reporters need to be equipped with background information to be able to draw out from public officials information that is useful for everyone.

CMFR noted the failure of the press to review the environmental aspects that make dengue endemic in the Philippines. DOH has learned a lot about the disease in its years of efforts to contain its spread in the country. In fact, the health department regularly conducts awareness campaigns to educate the public of dengue prevention—a key aspect of which is the elimination of mosquito breeding sites by maintaining a clean environment. It would have been helpful if the media gave steps on how to prevent dengue—information which are readily available in the DOH’s website.

The coverage also missed the larger context of concerns about immunization and vaccines. It was a lost opportunity for the media to educate people about the reality of risks in new vaccines, without diminishing the importance of immunization in national health programs. Media could have done so much more by presenting the broad range of issues about vaccines, how these are developed and approved for public use to promote awareness of the pros and cons, enabling communities to make informed decisions for their families.

US-based news agency New York Times published an article which reported the controversy over the adoption of the Dengvaxia vaccine in the Philippines. It provided global statistics about dengue incidence as well in the Philippines, which were notably scant in the Philippine media coverage. It also revealed the realities and risks taken in the development of new vaccines, citing experts who were concerned that vaccines in general may be perceived to be harmful as a result of this experience.

Like the coverage of war, public health issues should not be treated as breaking news. For reports about such matters to be effective, media must first gather critical information and provide the necessary context. Given the urgency and proximity of the issue, the Sanofi finding on their latest vaccine should have been an opportunity for journalists to educate themselves and the public about dengue and the efforts to control the disease.

The missed opportunity was all media’s failure.