Taking a Stand: Journalism for Humanity 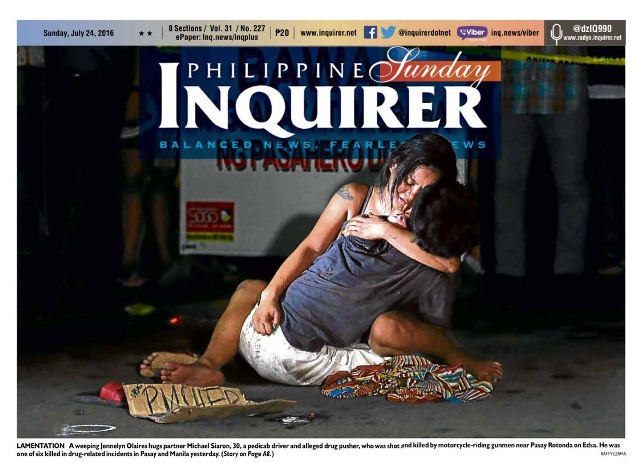 IN JUST a short span of time, President Rodrigo Duterte’s war on drugs has already claimed hundreds of lives, alarming not only human rights groups but even officials as well as members of civil society. The death toll, which began to rise as early as Duterte’s landslide victory in the May 9 elections, continues to surge as the government intensifies the campaign.

CMFR monitored the coverage of the anti-drug campaign and related issues in the news pages of the Philippine Daily Inquirer, The Philippine Star, Manila Bulletin, The Daily Tribune, Manila Times, Manila Standard, BusinessWorld, Business Mirror and Malaya Business Insight from July 1 to August 1, 2016.

Although there has been an abundance of reports related to the anti-drug campaign, the news coverage focused more on the immediate effects such as the high number of killings, arrests and surrendering of citizens suspected of drug involvement, allotting less attention to other related issues. With the exception of a few reports, there was limited space given to other voices such as the families of slain drug suspects, religious groups and human rights advocates.

During the period monitored, all nine newspapers published a total of 888 drug-related reports. The Bulletin led with a total of 208; followed by the Times with 186; and the Star, 165. The Inquirer came in fourth with 143 reports. (See Figure 1)

Figure 1. Number of Reports per Newspaper 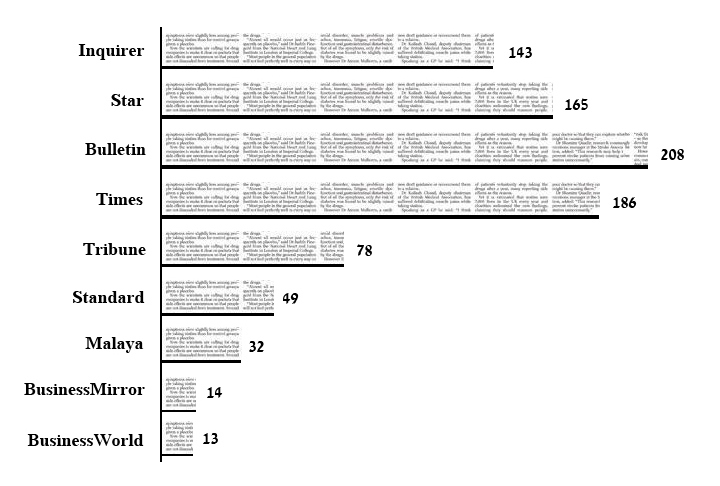 Most of the reports focused on the updates on the anti-drug campaign, for a total of 230 reports; followed by reports on the killings (210); and the surrender and arrest of drug users and peddlers (94). Other topics covered include statements from concerned groups and lawmakers, cases filed and probes to be conducted, reports on drug rehabilitation and jail condition, narco-politics, legislation, and other related subjects. (See Figure 2)

Figure 2. Number of Reports in Print per Category 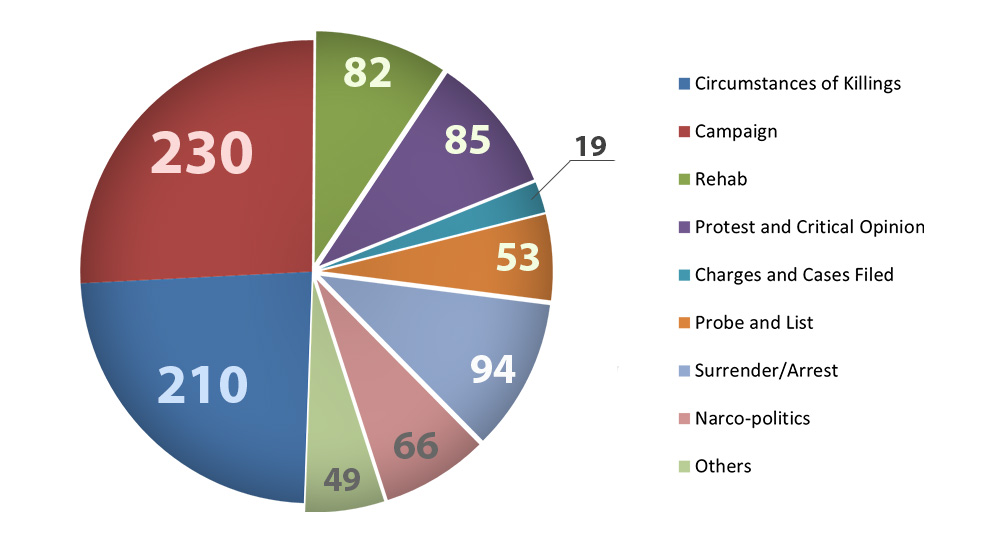 The straightforward reporting publicized the administration’s anti-drug campaign. (CMFR has already pointed out the superficial characteristic of reports on drug killings in a previous monitor.)

In certain circumstances, so-called journalism objectivity does not apply. Without critical notes and quoting only police authorities, merely straightforward reports presented the campaign as succeeding in its goal to fight drugs, suggesting approval.  But killings as a policy against crime are not the norm. The numbers of suspects slain are shocking and cannot be treated with “neutrality” by the press.

Otherwise, journalists, claiming such objectivity, reveal themselves to be without the normative values of their own society – primarily respect for human life and recognition of human dignity. Presenting the string of killings without background and analysis, without reference to opposing views is to suggest this as a norm in crime fighting, something that merits public approval.

The Inquirer had fewer drug-related stories than the Star, the Bulletin and the Times.  It ran more stories (36) with sources that were critical of the campaign. These include statements from human rights advocates and religious groups, denial of the kin of suspected drug users and pushers and exploratory stories on related issues. (See Figure 3)

By so doing, the Inquirer correctly adopted an editorial position about the killings.  It is a position that reflects the values inherent in its purpose and practice.

Figure 3. Number of stories that reported a different perspective 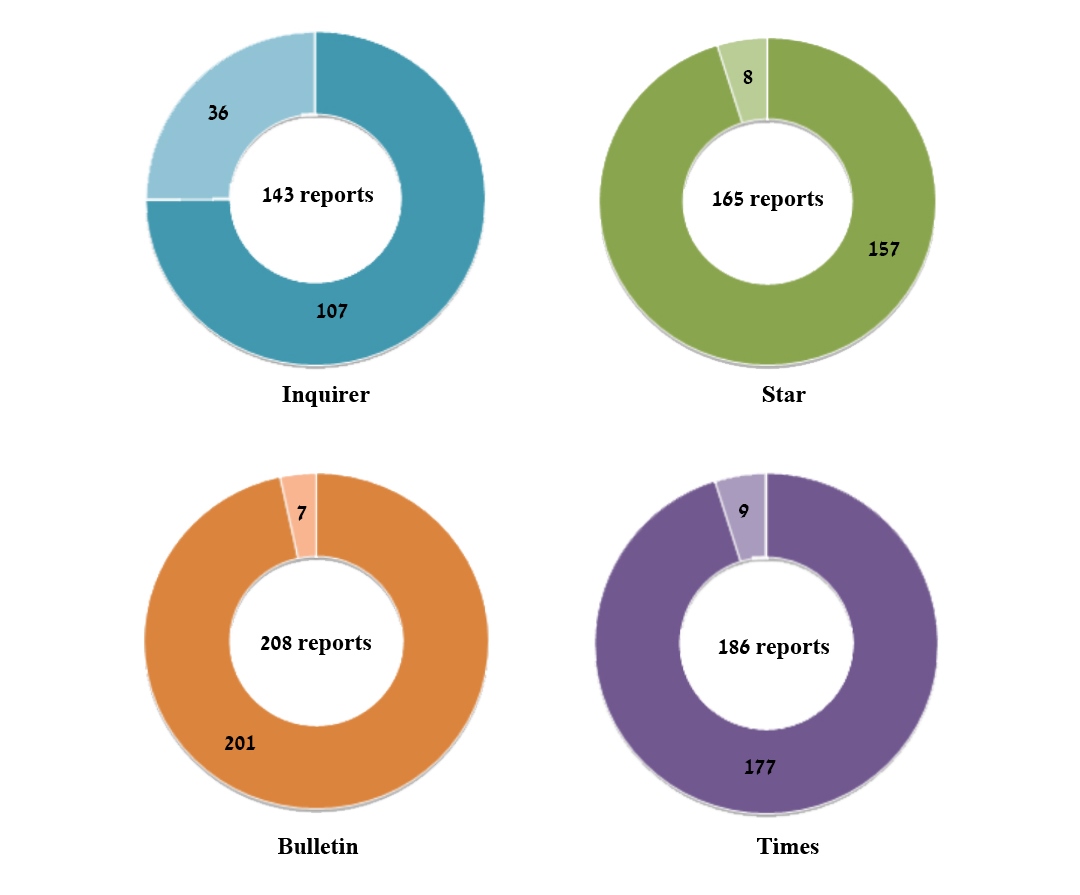 The Inquirer also published reports looking into related issues such as the lack of government support for drug surrenderees, cases of brutality and vigilantism, claims of innocence, rehabilitation, as well as the campaign’s impact on the poor.

The Inquirer’s stance became more evident in its July 24 issue when it used as banner photo a striking image of a grieving Jennilyn Olayres cradling her partner, Michael Siaron, who was killed by unidentified motorcycle-riding gunmen near Pasay Rotonda on Edsa.

The photo received mixed reactions. Duterte dismissed it merely as “drama” during his first State of the Nation Address (SONA) on July 25 while some accounts in social media raised doubts about its integrity. A blog even accused the Inquirer of “deceptive photojournalism.” The Inquirer stood by its photo and published articles on July 31 that recalled what actually happened during the time of the incident, the photographer’s thoughts on the public’s response, as well as a closer look at the life of the victim.

The Inquirer’s banner story on July 25 talked about the “public split” in opinion over the drug-related “executions” (“Drug executions: Public split,” July 25, 2016). Its August 1 banner story, meanwhile, looked back at the story behind the viral photo and carried the message of Olayres to Duterte—to “kill drugs, not people.” (“Widow tells Duterte: Kill drugs, not people,” Aug. 1, 2016)

While keeping regular tab on what’s happening in the war on drugs is necessary, the press needs to go beyond recording the daily death toll and using the same formula in presenting the news. It needs to widen its perspective in approaching this crisis, taking into account the several components that make democracy work: human rights, due process, the presumption of innocence, police and official conduct, and accountability.

CMFR recognizes the difficulty in covering the war on drugs because of safety and access concerns, but this is one of those times when the press needs to step up its game.