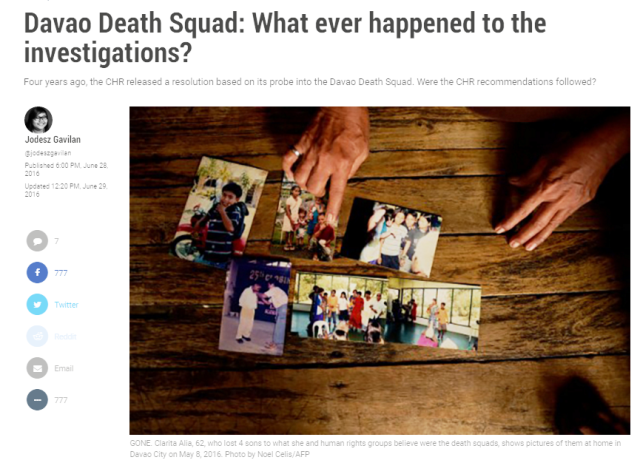 CHEERS TO Rappler for a report recalling the 2012 resolution of the Commission on Human Rights (CHR) which recommended for investigation by the Office of the Ombudsman — the “possible administrative and criminal liability” of then Mayor Rodrigo Duterte for the numerous killings committed in Davao City. CHR attributed 206 deaths to the Davao Death Squad (DDS) from 2005 to 2009, during Duterte’s term from 2004 to 2010. At the time, the CHR was headed by now Senator Leila de Lima. The historical context cannot be dismissed in assessment of the anti-crime policy of the new administration.

On June 28, Rappler posted “Davao Death Squad: What ever happened to the investigations?” which reviewed the findings of the CHR on the DDS, the vigilante group alleged to be responsible for summary executions in Davao City.

The CHR investigation found that 107 of the 206 killed were individuals who “had records or were suspected to have been involved in illegal activities.” Writer Jodesz Gavilan noted that “little is known about what happened since” despite the recommendation of CHR to investigate  the matter.

The Rappler report included a letter received by the CHR from the Office of the Ombudsman dated January 15, 2016, which notified CHR Chair Jose “Chito” Gascon that the investigations have been closed. The Department of Justice also announced in May 2016 that the probe on the DDS had been stopped following the disappearance of a key witness.

The recent spate of killings of alleged drug pushers and users has raised fears among human rights groups about the possibility of a repeat of the Davao experience on a national scale. Some members of the Senate have echoed that concern.