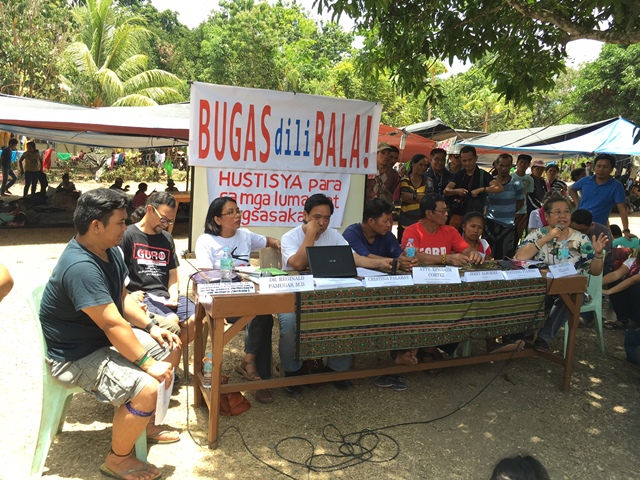 Members of the national fact-finding mission conducting a press conference days after violence erupted between protesting farmers and the police in North Cotabato.

THE VIOLENCE that erupted in Kidapawan City, North Cotabato, on April 1, when police officers opened fire on protesting farmers and activists, is one of those events that begs a lot of questions. The terror it brought to many, particularly the casualties and their families and friends, screamed for answers.

People turned to the media, as they should. Because violent incidents such as dispersals are common in the Philippines and getting things fast and right should be built in the press’ DNA, the public expects the press to provide answers as quickly and as accurately as possible.

The press, as expected, quickly picked up the story of the clash, freely making use of such adjectives as “bloody” and emphasizing the number of casualties on both sides. It should not come as a surprise, however, that the different media organizations gave different statistics on the casualties, as reporters from different organizations work with different deadlines.

The Inquirer reported 13 (“Cops, farmers clash in Kidapawan; 2 dead”) injured, the Star  had 30 (“Cops open fire: 2 die in farmers’ protest”), while the Bulletin pegged the number at 33, 20 of whom were policemen (“Demand for rice turns bloody”). Later, the numbers of broadsheet reports tallied.

Depending on sources from government, reports got sucked into what at the time seemed quite irrelevant: Did the protesters have a permit? The rally reflected a genuine tragedy of hunger and the scarcity of rice. Instead of raising the crucial “why” question with the Kidapawan City and North Cotabato governments, the press followed their lead, as local officials pushed hard to make a point of the farmers’ illegal assembly. This set the tone for some of the earlier coverage, as though a permit carried more weight than the cause which made them troop to the city and block the national highway.

The Star story reported that “Without any permit, the farmers allegedly convened in Kidapawan City, North Cotabato’s provincial capital.” The Inquirer’s “Use of guns by cops puzzles rights agency” on April 3 quoted North Cotabato Governor Emmylou Mendoza as saying that “They have no permit to rally, what they did is criminal.” This was also echoed in reports on 24 Oras, Aksyon and Network News. The focus on the permit diverted, albeit briefly, the public’s attention from the central issue of the apparent violation of the rights of the protesters.

Reportage on television appeared to hew closely to the same formula: The TV network reports provided such details as the parties involved, and where, when and how the dispersal happened, combined with videos of the violent clash between the protesters and police.

Departing from formula, some reports gave more useful information as well as context. Network News Weekend interviewed Governor Mendoza via phone patch on April 2, in which she outlined the standard operating procedure when it came to distributing government aid — the farmers were demanding rice and other aid because of the long drought. She explained that the first stage of the process was at the barangay level, followed by the municipal and provincial governments. Having recorded this statement, the report could have extended this line of questioning to probe whether the governor knew how barangays were performing their frontline duty.

On April 4, Network News’ anchor Pia Hontiveros also spoke to Department of Agriculture (DA) Assistant Secretary for Field Operations Edilberto de Luna, attempting to make sense of how the situation deteriorated into violence. Responding to questions, De Luna said that in Region 12, the DA distributed more than 4,000 bags of seeds of palay and more than 2,000 bags of corn seeds, apart from conducting cloud seeding operations. But asked by Hontiveros if these protesting farmers were recipients of the distributed seeds, De Luna said “Hindi ko po masasabi kung sila ay nabigyan o hindi nitong seeds na ito, pero po ito po ay nabigay natin sa affected farmers dun po sa Cotabato area. (I cannot tell if they were given the seeds, but these were distributed to the affected farmers in the Cotabato area.)”

Helping provide context to the tragedy, 24 Oras ran a report by Maki Pulido on the El Niño phenomenon on April 4. The report noted that warnings had been issued as early as 2014 about its impact, and that government efforts such as the National El Niño Action Plan, according to the DA, could have helped more if funds had been released on time by the Department of Budget and Management (DBM). Unfortunately, the report did not raise this point with the DBM.

The media could have explored the issue, which in reports were raised by government spokesmen, among them Manolo Quezon — involving the role of leftist groups that reportedly manipulated farmers to join the protest action. The mainstream media — instead of repeating the government’s claims uncritically — could have delved into this dynamic. If they did, they would have discovered that suffering farmers often go to these activist groups for help, and that these groups often do their organizing in areas where there is precisely this kind of suffering. Media should have presented this reality without negating the hardship caused by the drought illustrated by the clash.

The first reports on print and TV did not mention the revised Philippine National Police operational procedures published in December 2013, which specifies the acts the police are prohibited from committing under the rule on rallies and demonstrations. These include “unnecessary firing of firearms to disperse the public assembly” and what are not allowed “within one hundred meters from the area of the activity of public assembly” such as “carrying of a deadly or offensive weapon or device such as firearm, pillbox, bomb, and the like,” and “the carrying of firearms by CDM (crowd dispersal management) contingents,” among others.

On April 3, the Star published Section 13 of the Batas Pambansa 880 (Public Assembly Act of 1985) in “CHR probes violent Kidapawan dispersal.” The said act prohibits law enforcers from carrying firearms within 100 meters of the protest area.

On April 6, GMA News Online posted “What the PNP operations handbook says about handling rallies” and included the full text of the rule on rallies and demonstrations found on the PNP’s operational procedures.

The Philippine press has more than enough experience when it comes to reporting conflict and civil disturbances. Demonstrations and dispersals, after all, happen all the time. Perhaps the visceral nature of such events can be blamed for the lack of deeper context and nuance in the media coverage. More could have been done to explain the impact of the drought in reporting the clash; and, more importantly, reporting on the drought should have been done way before the deadly clash.

The emerging challenge for journalists is to provide reports that get ahead of the crisis, with information that calls for policy action on the part of government.  The same information should reach the public, especially those who will be most affected.

A quick audit of how the media performed the challenge of getting ahead of this story is in order. The media serving the communities in the countryside and the government agencies at the local level that are tasked to provide for citizens in times of crisis should take the lead. The national press associations, such as the Philippine Press Institute (PPI) and the Kapisanan ng mga Brodkaster ng Pilipinas (KBP), should prod their members to observe this responsibility.

This experience of violence is rooted in something that recurs, the perils of “the dead season” that comes in cycles familiar to communities in the countryside. In 2015-2016, the dry season has been made worse by El Niño, a climate phenomenon about which scientific groups have issued enough warnings.  Were the media interested enough to alert the public about the impact of extreme drought on food sources for the masses?

The press could’ve helped prevent last week’s bloodshed. It has to learn to make such un-exciting issues relevant and interesting to the public as these give rise to violence and conflict, which for so long have served as fodder for news.