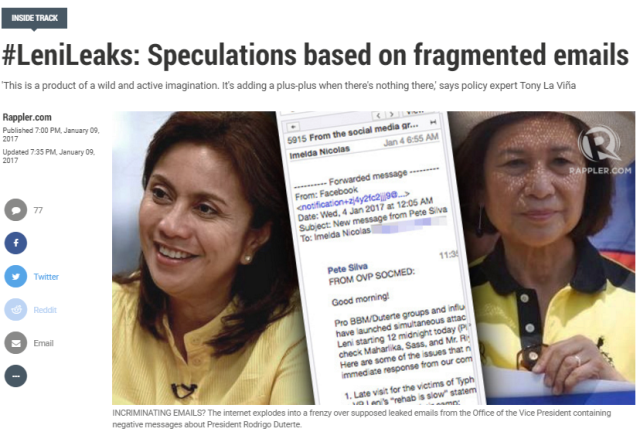 THE PLOT thickens.  In the last two weeks, social media personalities have triggered a barrage of anger and outrage, as they released what they claimed as proof of a grand design involving groups overseas to oust the president.  #LeniLeaks gave the vice president a central role in the plan.

CMFR traced the genesis of #LeniLeaks and found the joint tissue connecting the pro-Duterte community on the Internet and the Presidential Communications Operations Office (PCOO). #LeniLeaks compiled threads in a digital conversation found in the Yahoo Group of the Global Filipino Diaspora Council (GFDC).

The hashtag began trending January 8 after Duterte supporters, led by Sass Rogando Sassot and a blogger identified only as Thinking Pinoy posted a series of email messages which they claimed involved a plot of the “yellow army” to remove President Duterte from office.

Press Secretary Martin Andanar followed up with an audio interview with Sassot and Thinking Pinoy in his podcast.  Both said that the vice president is conniving with groups overseas to overthrow Duterte. Thinking Pinoy went as far as to say that the Office of the Vice President is driving the campaign using government funds, adding that this is a violation of the Anti-Graft  and Corrupt Practices Act.

Both print and broadcast media picked up the issue, but most reports were limited to “he-said, she-said,” getting quotes from Malacañang, Robredo and US-based business leader Loida Nicolas Lewis.

None of the reports went beyond what was actually said in the threads. Without evaluating the claims, these reports served the ploy of those determined to project Robredo as part of the conspiracy.

At the very least, such reports helped to justify the hostility of the Duterte administration toward Robredo. The vice president was barred from attending Cabinet meetings which forced her to resign her post as Housing and Urban Development Council Chairperson. Later, the Palace after sending an official invitation, called the Office of the Vice President to disinvite Robredo to the traditional Vin D`Honneur hosted by the president for the diplomatic corps.

Most reports on the matter were limited to what the camps had to say. ANC’s Dateline Philippines (January 8) expanded the scope of coverage, including Andanar’s comment that while the Palace was still investigating the matter, Robredo should also investigate her staff for their involvement in the plot. Ramon Casiple of the Institute for Political and Electoral Reform was also interviewed, saying all these attacks and counter attacks are part of democracy.

Even before the leaked emails, pro-Duterte netizens had already begun talking about an alleged scheme to oust the president. They showed photos of the vice president supposedly attending rallies calling for the ouster of Duterte. In fact, the photo they used was taken during a ceremony in the Bantayog ng mga Bayani to honor new names added to the list of Filipino patriots. The photo was used to suggest that she was in an anti-Marcos rally held elsewhere in the city.

What about the current exchange? Where is Leni Robredo in #LeniLeaks?

The cited threads include conversations in which mass protests were suggested, to build on the outrage against the extrajudicial killings and the Marcos burial. There was a suggestion to write about Duterte’s supposed violations of the constitution as these “could be legal grounds for his removal from office.”

In the January 10 episode of ANC’s Headstart, host Karen Davila, probed the basis of these charges. She said that these were an exercise of freedom of expression in a democracy. She asked Andanar, “They were essentially calling to take advantage of the protest of the Marcos burial and encourage more people to protest. Is that against the law?”

Saying that they were still awaiting the advice of the Department of Information and Communications Technology, Andanar emphasized that the statements deserved to be examined because — “the president has the mandate of the people.”

In the same program, Andanar said although the vice president was not in the group, “there are names there that belong to the Office of the Vice President.” Still, he did say that no one could jump into conclusions just yet.

True enough, Robredo is not part of the group.  And attaching her name to the allegations becomes part of the plan to profile Robredo in the most negative light.

Rappler’s “#LeniLeaks: Speculations based on fragmented emails” went to the core of the issue. The report cracked the solidity of the leaks and concluded that the claim of an ouster plot “doesn’t hold water, if based only on the “leaked” threads in an e-group’s ongoing exchange.

Rappler reviewed the screenshots from the thread, identifying the points of information these provided.  These included references to:

Rappler then pointed out the loopholes: While there is a call for Duterte to resign, there was no mention of any move to oust him. The report quoted legal and policy expert Tony Laviña who said, “…to call for the President’s resignation is a free political exercise.” On the other points, La Viña said that he doesn’t see anything unusual about the email conversation, “every politician will have his own communications strategy.”

CMFR’s review of the coverage detects an all too tight connection between this most recent political noise about a plot to oust the president and the president’s own communication team.