Presenting the Agenda of Presidential Candidates 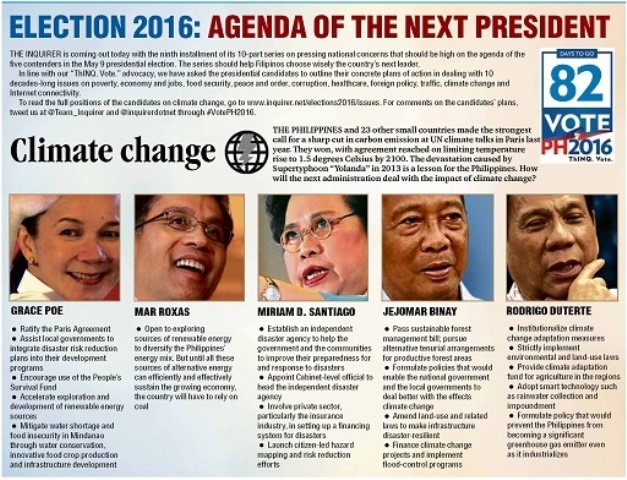 The Inquirer’s 10-part series started Tuesday, February 9. While published versions summarized how the candidates for president would address issues of common concern, the PDI microsite had the full versions. Screengrab from the Inquirer.net front page

CHEERS TO the Philippine Daily Inquirer for its series on presidential platforms to address issues of public concern.

On February 9, the Inquirer started “Election 2016: Agenda of the Next President,” a series on persistent concerns “that should be on the high agenda” of contenders in the coming presidential elections. Appearing on the front page of the broadsheet, the series outlined the action plans of the candidates on “decades-long issues,” among them poverty reduction, the economy and jobs, food security, and corruption. The series have have been a daily feature since it started.

The published version summarizes the candidates’ declared intention to address these issues, but the full details are available in the Inquirer’s microsite inquirer.net/elections2016/ssues.

With the national elections only a few months away, most media organizations have begun covering the campaign for the presidency. But among the three largest broadsheets, the Inquirer is the only newspaper that has solicited and presented the plans of action of the contenders for the country’s highest post. It presents the plan in brief, but includes salient points of implementation made by each presidential candidate in the different areas taken up.

As the campaign progresses, news organizations should do what they can to keep coverage on point with presidential platforms, with reporters questioning candidates further on complex problems that cannot be solved by simple solutions.