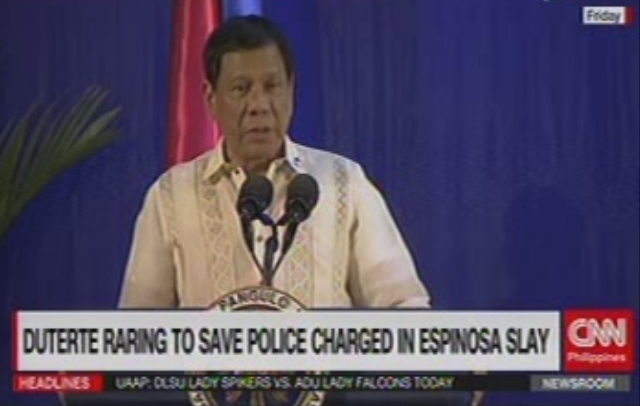 PRESIDENT DUTERTE vowed to defend cops anew after nineteen police officers tagged in the killing of former Albuera, Leyte Mayor Rolando Espinosa Sr. in November 2016 surrendered, following the issuance of an arrest warrant against them on March 20. The cops were charged with murder.

Speaking to local officials in Socorro, Oriental Mindoro on March 29, Duterte said he is willing to pardon the embattled cops. “They can go to court and I say no more trial. Plead guilty—guilty. Bring them to the judge, pardon, absolute,” the president said. He repeated this message in a speech in Malacañang on March 31, this time also promising to promote the policemen.

The announcement was outrageous, but hardly a surprise.

As soon as he assumed office, Duterte assured the police of protection as they perform their functions. “Do your duty, and if in the process you kill one thousand persons because you were doing your duty, I will protect you.” The president said during the ceremonies for Philippine National Police (PNP) Chief Ronald Dela Rosa’s assumption of command in July 2016. With the same bravado, Duterte dismissed the findings of a joint Senate committee report which concluded that Espinosa’s death in a “firefight” after allegedly resisting arrest was “premeditated and with abuse of authority.”  In its findings released in December 2016, the National Bureau of Investigation (NBI) said Espinosa was killed in a “rubout” and recommended that the Department of Justice (DOJ) file multiple murder and perjury charges against the Criminal Investigation and Detection Group (CIDG) Region 8 officers involved.

Media reported Duterte’s expressed intention to pardon the cops charged with the killing of Espinosa. But these reports did not include any discussion of the possible repercussions of such a pronouncement – the interference of the executive in the country’s judicial system, the encouragement of impunity of wrongdoing by law enforcement officers.

Duterte’s statements were quoted in print and TV news programs.

News reports recalled the killing of Espinosa and referred to other relevant information for context. Other voices which offered other views on the subject also appeared in reports. These include some senators, former government officials, lawyers and legal experts. Coverage was brief with most reports simply repeating what the president said.

The president’s intention to protect the alleged killer cops showed how far the chief executive is prepared to support erring policemen for so long as they are implementing his drug policy. The media’s coverage reported the statement with hardly any reference to opposing or critically analytical views.

There was little evidence in the coverage of views expressed by civil society or other experts. The media recorded the intent to pardon even before conviction as though this was normal.

No report referred to a previous development when Duterte expressed his frustration about the corruption in the police force or to his abolition of the AIDG and his call for a purge of “scalawags” in the police ranks?  Most reports failed to note the inconsistency of the president’s positions.

CMFR cheers the exceptions which attempted to take issue with the president’s statements.

CNN Philippines’ News Night aired the view of Dean Nilo Divina of the University of Santo Tomas Faculty of Civil Law which emphasized that the police should not misconstrue the president’s statements as a license to commit crimes. Asked about Duterte’s statement, Divina explained that the accused must first be convicted with final judgment before they can be pardoned, which means there has to be an admission of guilt and a request for pardon before it can be given. Divina also said, however, that the accused can cut the process short by just pleading guilty. “If they plead guilty and judgment is rendered, they can be pardoned by the president,” he said. (“Duterte raring to save police charged in Espinosa slay,” April 1)

This was echoed by Judge Arguelles when interviewed by the media during his surprise visit on April 1in the CIDG-8 detention facility where the cops are currently held.

In a Manila Standard report, former San Beda College of Law Dean Ranhilio Aquino called on Duterte to be circumspect in his pronouncements and to stop offering pardon to any police convicted of killing drug suspects. “I think it erodes the criminal justice system in the country. I don’t think it serves the purpose of law enforcement,” said Aquino in a radio interview, according to the report. (“Rody’s pardon offer to backfire – ex-dean,” March 31)

Rappler picked up the statement of the Former Senior Government Officials (FSGO). The FSGO urged Duterte not to “abuse” the power of presidential pardon, explaining that it is intended to “provide a chance to correct judicial mistakes and to extend clemency to those deemed to have sufficiently atoned for their offenses.” (“Don’t abuse presidential pardon, ex-gov’t officials tell Duterte,” April 4)

Authorities, in this case the police, must be held accountable for the blunders and serious crimes they commit. The public has to have sufficient knowledge about the issue. The press should provide this knowledge and this analysis.

Reporting statements without any kind of evaluation may precondition the public to accept something as the norm, most especially in matters that may have far greater implications in the long run.

The president’s zeal in protecting erring police is dangerous as it could further empower wrongdoing, including killings of citizens to cover up for police involvement in illegal drugs. His stand on the suspects in a killing of a person while in detention raises questions about his determination to fight corruption or exposes the sham of his drug war.

Alas, the media is not eager to pursue this line of investigation.