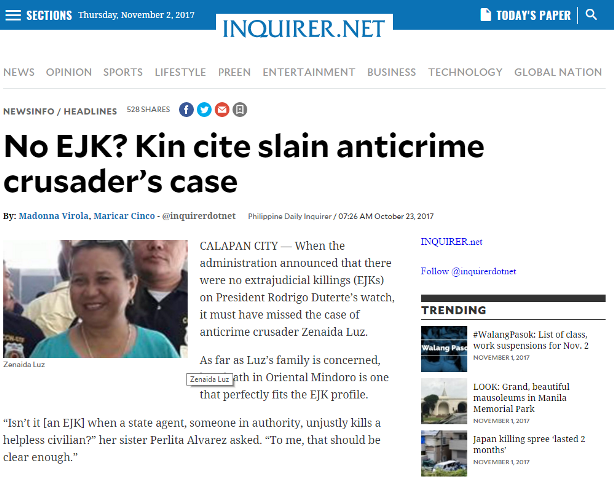 CMFR CHEERS Philippine Daily Inquirer for recalling the case of Zenaida Luz, an anti-crime crusader who was killed in October last year in Gloria, Oriental Mindoro, amidst the claim of the police that there are no extrajudicial killings (EJKs) under President Rodrigo Duterte’s watch. (“No EJK? Kin cite slain anticrime crusader’s case”)

Luz was the regional chair of Citizens Crime Watch (CCW), a non-profit organization with programs encouraging citizen participation in fighting crime.Reacting to the “zero EJK” claim of the police, Perlita Alvarez, Luz’s sister, recalled the circumstances surrounding Luz’s death. “Isn’t it [an EJK] when a state agent, someone in authority, unjustly kills a helpless civilian?” Quoted in the report, she said, “To me, that should be clear enough.”

According to police and media reports, Luz was gunned down in front of her house by two pairs of motorcycle-riding gunmen on October 9 last year. Two suspects managed to escape while the other gunmen were cornered in a shootout by responding police. Captured and arrested were two members of the police force; Senior Insp. Magdalino Pimentel Jr. of the Provincial Public Safety Company and Insp. Markson Almeranez, then police chief of Socorro, Oriental Mindoro. The two tried to conceal their identities. Pimentel wore a ski mask, while Almeranez wore a woman’s wig.

Pimentel and Almeranez were dismissed from service, charged with murder, and were initially detained at the Bansud provincial jail. Fearing that the suspects might influence the judge handling the case, Luz’s family petitioned to transfer the hearing of Pimentel and Almeranez to the Manila Regional Trial Court. The Supreme Court granted the petition and the suspects were transferred to the custody of the National Bureau of Investigation in February 2017. Last August, however, Pimentel and Almeranez were released on bail after Manila RTC Judge Daniel Villanueva ruled that “the evidence against the accused does not appear to be strong.” Trial for the charges against them is still ongoing.

Follow up stories on cases would help check the unproved and insistent claim of the police that EJKs are not an issue. Zenaida Luz is one case. The killing of Albuera, Leyte Mayor Rolando Espinosa Sr. while in detention also involved police. The media should check the records on others, persist and insist that the police release their findings on cases classified as under investigation.