Insensitive Use of Victim’s Photo: Sensationalizing a Tragedy in a Public Place 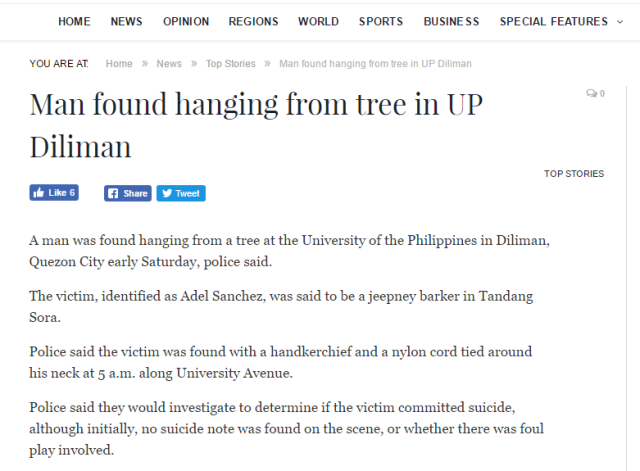 UNLIKE ONLINE photos that can be taken down, photos in print media cannot be retracted, and become part of the permanent public record.

On July 9, The Manila Times published a brief news report about an apparent suicide in the UP Diliman campus where a dead man was found hanging from a tree on a vacant lot near University Avenue. The victim was identified as a man who lived in Tandang Sora, Quezon City and who made his living as a jeepney barker.

Times accompanied its report with a full-color photo of the body still suspended from the tree, placed obtrusively at the center of the page, with a one word caption: “GRIM”. Though the picture shows the back of the body, the details of clothing and other personal effects are clear. At the time, the police had not yet determined the death as a suicide or if foul play was involved.

The use of the photo was uncalled for, with no added value to the report except to further sensationalize a tragedy. Publishing graphic photos of victims is insensitive, stripping them of their dignity and privacy. Although the hanging did take place in a public place, it is no excuse for the kind of treatment that dehumanizes victims, whatever the circumstances.  Such unfortunate subjects should never be used for public spectacle, reducing the dead as a mere commodity of the news trade.