In the Know: Providing Background Information 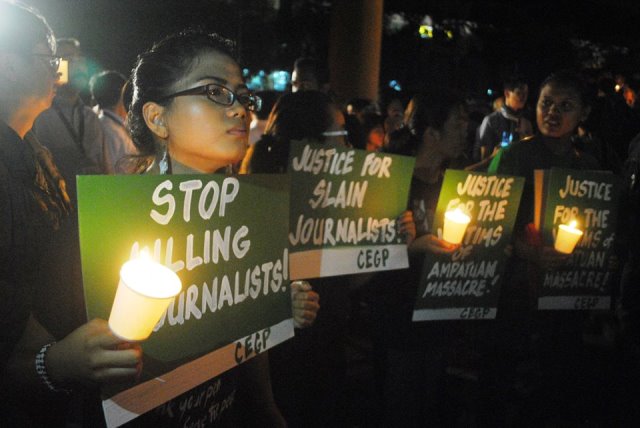 Groups gathered at the EDSA Shrine in Manila on 23 November 2014 and lit candles to commemorate the 5th year since the Ampatuan (Maguindanao) Massacre. Photo by Lito Ocampo

CHEERS to the Philippine Daily Inquirer for providing background information on past government bodies tasked to look into the killing of journalists.  The Inquirer published the banner story “Probe of media slays given to superbody” on July 11, on Presidential Communications Secretary Martin Andanar’s announcement about an administrative order to be issued by President Duterte, which would create a task force to look into media killings. The same body would provide assistance to the families of slain journalists.

A sidebar to the article — “In The Know: Past special bodies”– listed the special bodies organized by  past administrations that were tasked to look into media killings. The list included the “Inter-Agency Committee on Extra-Legal Killings, Enforced Disappearances, Torture and Other Grave Violations of the Right to Life, Liberty and Security of Persons (Administrative Order 35)” during the term of Benigno Aquino III, and the “Task Force Against Political Violence (Administrative Order 211)” during Gloria Macapagal-Arroyo’s term.

The supplemental information on task forces and committees organized by Duterte’s last two predecessors added the needed context to the story. It could have been incorporated in the article itself, but the Inquirer’s effort to review previous administrative orders is commendable as the killing of journalists remains a long-standing problem. CMFR’s database on the killings of journalists and media workers shows 228 have been killed since 1986, 152 of whom were slain in the line of duty.