Customs Under Fire: Shabu from China on the “green lane” 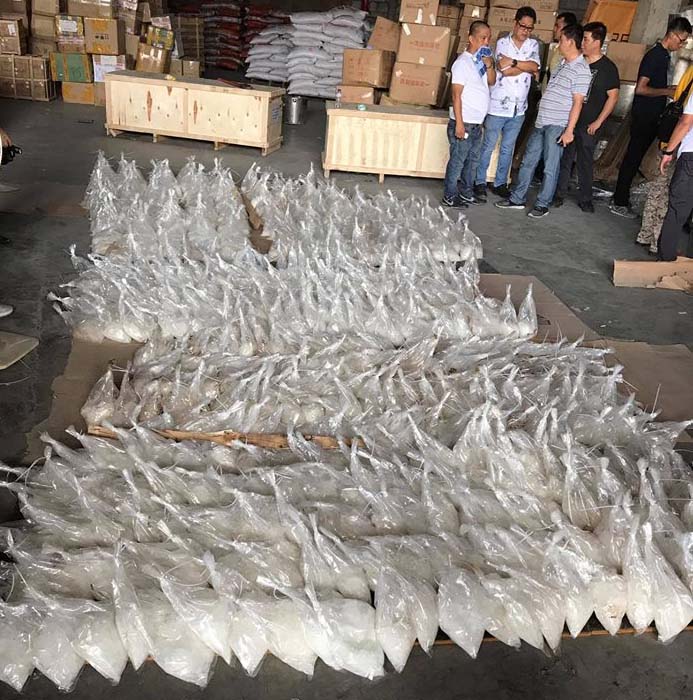 HEARINGS IN the House of Representatives and the Senate probed the smuggling of at least 600 kilograms of shabu worth PHP6.4 billion. Held in five metal cylinders, the drugs were discovered in a warehouse in Valenzuela by the operatives of the Bureau of Customs (BOC) last May 26.

Documents showed the shipment originated from Xiamen, China and arrived in the country on May 17, released from the BOC’s port in Manila on May 23, passing through the bureau’s “green lane.” According to a Customs directive on the handling of goods sent from China, the package should have gone through stricter inspection.

The probe raised questions about the performance and qualifications of the bureau’s officials, particularly Customs Commissioner Nicanor Faeldon, whose demeanor during the hearings was criticized as “haughty” in the midst of corruption allegations against his agency. Maintaining his support for Faeldon in the immediate aftermath of the scandal, Duterte announced in a press conference on August 21 that he had accepted Faeldon’s resignation.

The simultaneous inquiries conducted by congressmen and senators, which began in late July, highlighted loopholes in Customs protocols, such as its shipment inspection policies and bureaucratic hierarchy. Human error was also noted, as in the case of the failure to keep up-to-date the BOC database of importers. Legislators interrogated ranking Customs and Port officials, as well as a customs broker who talked about “tara,” the customary payment of bribes.

Also summoned by the Senate were Chinese nationals who were alleged to have been involved in the business. Cited for contempt for inconsistency in their statements, businessman Richard Tan (Chen Ju Long), owner of Hongfei Logistics which transported the illegal cargo and Manny Li (Li Guang Feng), Tan’s supposed middleman, were placed under Senate custody. Tan was evasive when asked about who shipped the contrabands while Li was accused of altering the packing list to conceal the cylinders containing the shabu.

The hearings were aired live on television. Media reports relied mostly on the proceedings, which were open to public viewing, failing to go beyond the exchange between legislators and the witnesses, and the points they highlighted.

Tracking the information flow, media attention on the issue was inconsistent as reports only appeared when there were scheduled hearings.

The media zeroed in on the lapses by Customs officials and other individuals which enabled the smuggling of the contrabands, noting the finger-pointing among those involved in the controversy. The accusations about bribery payments of broker Mark Taguba were prominently carried by the media along with the responses of assailed BOC officials and others involved. Beleaguered Customs Commissioner Faeldon’s statements appeared often in the coverage. Media also reported suspicions registered by lawmakers about the involvement of Chinese nationals in the fiasco.

Side issues such as the BOC’s lack of sufficient X-ray machines, the hiring of professional athletes in the bureau, and the allegations made about Davao City Vice Mayor Paolo Duterte’s links to the smuggling of drugs were noted in the reports.

The probe also shifted attention to the failures of the agency and singled out Faeldon’s lapses as the Customs chief. In late July, media reported the spat between House Speaker Pantaleon Alvarez and Faeldon’s chief of staff Atty. Mandy Anderson.

Given President Duterte’s disdain for illegal drugs, the seizure of billions of pesos worth of shabu was a significant development which merited, at the very least, some comment from Malacañang, if not the full measure of the wrathful language which the public has come to expect from Duterte about anything that involves drugs. But Duterte was silent on the issue.

With exceptions, media did not make much of this unexpected silence. Without GMA News Online, Inquirer, Star and TV Patrol specifically citing comments of senators Antonio Trillanes IV and Panfilo Lacson, and Congressman Gary Alejano about the president’s seeming lack of interest in the issue, the strange reaction would have gone almost without notice.

Media did inquire about the president’s reaction and settled with a canned response from presidential spokesperson Ernesto Abella. He said the president would “allow the process to unfold” (referring to the ongoing investigations by the House and Senate), and that he “does not intervene” in such matters — observations which were objectively not faithful to the president’s readiness to speak on cases involving police and drug operations. The response was reported in print, television and in news websites.

Another unexplored lead could have inquired into what the government would do about the involvement of Chinese businessmen in the drug trade. What action would Duterte take to end the businesses based on drugs? Why this handling with velvet gloves – so different from the hot pursuit of media owners? Is he afraid of offending China’s leaders? If the president does not work on the drug menace at this source, how does he expect to address the problem of drugs for the long term?

Holding back this line of questioning, media could have still explored other obvious angles, such as the history of the long-standing record of drug trading between China, the Philippines and other countries in the region. Clearly, there are enough sources which could have provided information on the subject.

British news agency Reuters in December 2016 published an article looking into the Chinese’s involvement in the drug trade in the country. Given the seizure of the shipment and the hearings, such a report coming from local sources would have been timely and may have yielded more important findings.

With the rising public anger over the spate of ruthless police operations and more murders of drug suspects, belated media efforts may still prove timely.