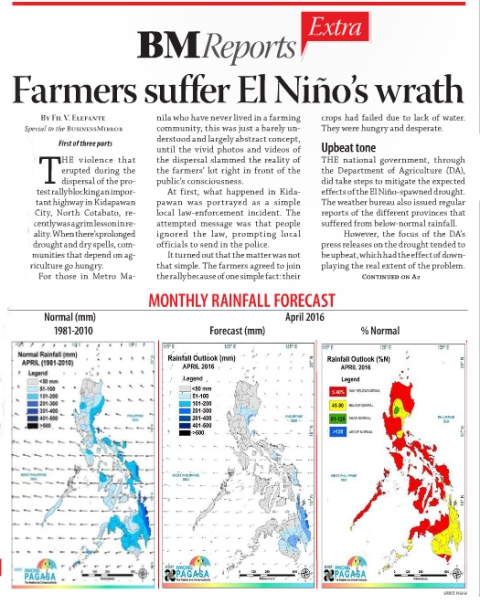 CHEERS TO BusinessMirror and Vera Files for running pieces that looked more closely at the El Niño weather phenomenon and government attempts to mitigate its impact in light of the recent clash in Kidapawan City, North Cotabato.

From April 11 to 13, BusinessMirror published “Farmers suffer El Niño’s wrath,” which took up various aspects of the disaster experience wrought by drought. Written in three parts, the reports were highly informative as these tracked the response of the Department of Agriculture (DA) and the shift in the tone of its press releases and pronouncements before and after Kidapawan.

In the first part of the series, reporter Fil Elefante wrote on the worsening drought and the warnings earlier issued about it by Philippine Atmospheric, Geophysical and Astronomical Services Administration (Pagasa).  Elefante noted the “upbeat tone” of DA press releases as it announced the steps the agency had supposedly taken to mitigate the effects of El Niño on agriculture. The DA press releases highlighted the use of cloud-seeding operations as the “most effective El Niño adoption strategies” that “bring in positive results.”

The second part of the report, published on April 12 and written by Manuel Cayon, looked at the plight of the farmers, noting that the province of North Cotabato had already declared a state of calamity earlier, empowering the local government to use five percent of its annual budget, amounting to almost P500 million,  to address the drought. It also reported that the city had identified 11,240 households eligible for direct food assistance and the province’s food-for-work program.

Because Kidapawan is  among the areas most affected by the drought, this section cited the measures taken by Kidapawan officials to alleviate the impact of the disaster.  Kilusang Magbubukid ng Pilipinas (Peasant Movement of the Philippines) regional chairman Pedro Arnado explained that Kidapawan City was chosen as the center of the protest action because it is where the biggest National Food Authority warehouse is located.

Concluding the series, Elefante cited experts from Pagasa who evaluated the impact of cloud-seeding. These pointed out the limitations of cloud-seeding when the evaporation rate overtakes the production of rain from seeding. They also explained how seeding efforts must be strategic, seeking to divert rainfall to water catchment areas so as to disperse the benefits of rain, indicating thus  the wider impact of drought,  since the lack of rain reduces the power generating capacity of hydropower facilities, which in turn leads to power outages.

For its part, VeraFiles.org published “Kidapawan tragedy: Spotlight on climate change and local governance” on April 14, which focuses on the limitations of the capacity of LGUs which are now mandated with authority and responsibility to address climate change and disaster risks. It explained the expansion of the role of LGUs through the Climate Change Act and the Disaster Risk Reduction Management law. The report also cited data from the Department of Interior and Local Government (DILG) which as of December 2015 showed that out of 782 LGUs, only 160 have developed climate change action plans. Interviewing NGO experts who have reviewed the steps taken by LGUs in this area, the report called attention to the limited planning capacity of local officials, some of whom simply cut-and-paste measures from other plans.

An expert view encompasses current detail in his review of cycles of food shortages even during drought-free seasons which emphasizes the link “between hunger and violent conflict.” Published by the Inquirer (“Bloodshed in Kidapawan: Climate change, conflict, politics of famine,” April 10), International Alert Country Manager Francisco Lara’s essay is instructive not only for policy makers and officials but for the media as well.

As pointed out in an earlier monitor, the media can’t remain in reactive mode, given emerging issues that could lead to crises (“Reporting the Kidapawan Clash: Lots of Questions”). Journalists, editors especially, need to look ahead to provide information that can call for policy review as well as prod government to take emergency action to avoid or mitigate the  effects of disaster.

But efforts to explain the underlying issues post-Kidapawan are valuable. Public attention has not quite turned away from the horror of the bloodshed. And the Senate continues to probe official negligence and other flawed State responses. At some point, the members of the committee themselves noted that the law(s) they have passed may also require review and amendments.