A View to a Kill: Investigative Report Finds Police-Vigilante Link 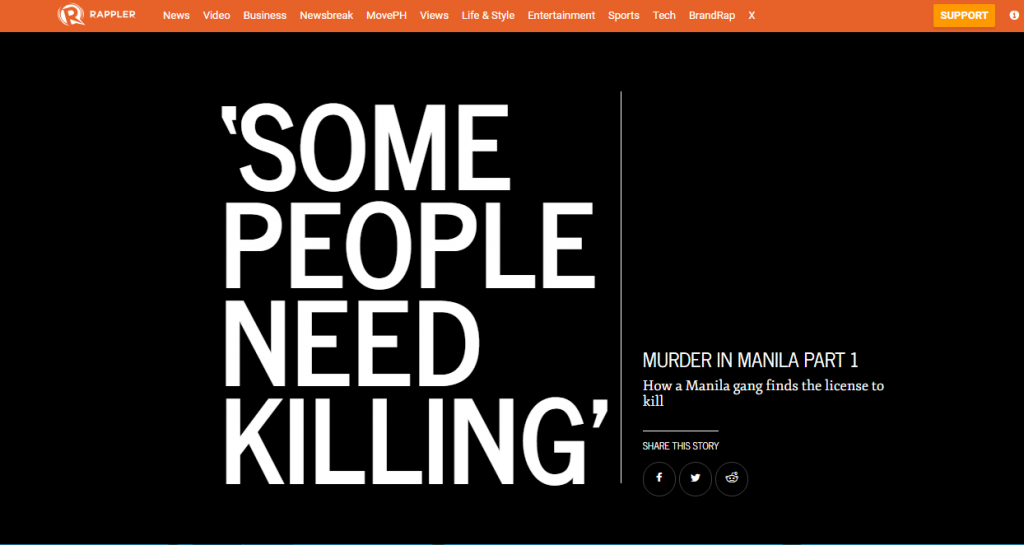 CHEERS TO Rappler for “Murder in Manila,” a seven-part series on the Philippine National Police’s (PNP) involvement in some cases of extra-judicial killings (EJKs). While much of the media has reduced the Duterte “drug war” narrative  to mere crime reports, the Rappler series, a product of a six-month investigation on the alleged vigilante group Confederate Sentinel Group (CSG)-Tondo Chapter 2, found “strong indications” that local PNP officials  were using CSG to kill for them.

The reports explained how PNP officials coordinated with the vigilantes, took credit for their murders, and occasionally paid for assassinations in the name of the Duterte regime’s campaign against drugs.

The series followed the cases of “Simon” and “Angel,” both members of the CSG chapter operating in Brgy. 105 of Tondo in Manila, who said police provided them a kill list and that they received a bounty for each “job.” Rappler narrated how they would murder alleged drug personalities, and then call the police. The police would arrive at the scene and claim the killing as a legitimate police operation.

Asked who gave them the orders, both said they “[got] it from the chief.”

Other sources, whose identities were withheld, also confirmed that the local CSG “commander,” a Ricardo Villamonte alias Maning, was taking orders from Police Superintendent Robert C. Domingo, commander of Police Station 1 in Raxabago, Tondo from November 2016 to April 2017.

Domingo allegedly gave Villamonte a target list of drug suspects with instructions to “take them down.” But Angel claimed that Domingo “was just a tool…There’s a general involved.” Domingo refused Rappler’s request for an interview.

Meanwhile, Villamonte admitted that he was appointed CSG commander by Captain Jonar Cardozo, commander of the Police Community Precinct (PCP) of Smokey Mountain, but categorically denied CSG’s involvement in any murder or illegal activity.

Police were “showing off”

For Simon, the murder of 16-year old Charlie Saldaga was the undoing of CSG. “Some people need killing,” he said, but Saldaga was not one of them.

In February 2017, Villamonte or “Commander Maning” and two others were apprehended in a police raid on the CSG outpost, and charged with the murder of Saldaga. But on the day they were subpoenaed, the victim’s mother withdrew her complaint and asked for the dismissal of “all charges of kidnapping with homicide and murder” against them. The Saldaga family is now in hiding while Villamonte and the others live freely in Brgy. 105.

The other CSG members arrested in a raid had been paraded before national media as “proof [that] cops had little to do with the rising death toll.”

As Rappler recalled, the arrests came at a time most convenient for the PNP. They were under fire for Korean businessman Jee Ick Joo’s murder, and Amnesty International had just released a scathing report that claimed they had been “fabricating evidence and assassinating drug suspects for pay.”

For Angel the police raid on CSG was a betrayal. PNP arrested the three for the job they had been hired to do. “They were showing off. But they knew that the guys they caught were like us: we were the police’s men on the ground,” he said.

Rappler’s investigative report found the link between the PNP and the vigilante killings that the police tagged as “deaths under investigation.” The administration did not only encourage killings by promoting a culture of violence and impunity in the police. In some cases, it was also directly involved.

Media should take the cue from Rappler and international media organizations such as Reuters and BBC by doing more in-depth reports on the “drug war” rather than simply reporting the ongoing killings as if they were “normal.”

As CMFR noted in its study on media’s coverage of the drug war, “it is not too late to update coverage of the continuing war on drugs and to raise questions about what it has gained and what has been lost.”

See the links below for Rappler‘s series.

Part 6 | ‘There are snakes everywhere’