JEERS TO the Philippine Daily Inquirer for a front page photo caption that stereotyped Muslims, and Muslim women particularly, last May 9.

The paper published a photograph of President Benigno S. Aquino III shaking hands with an unidentified Muslim woman in a burqa. The photo caption read: “SECURITY RISK? President Aquino greets a Muslim woman wrapped in a burka and niqab during the oath-taking of officers in charge of the ARMM Regional Legislative Assembly held in Malacañang on Tuesday. The unidentified woman is reportedly a relative of one of the officers.” (emphasis by PJR Reports) 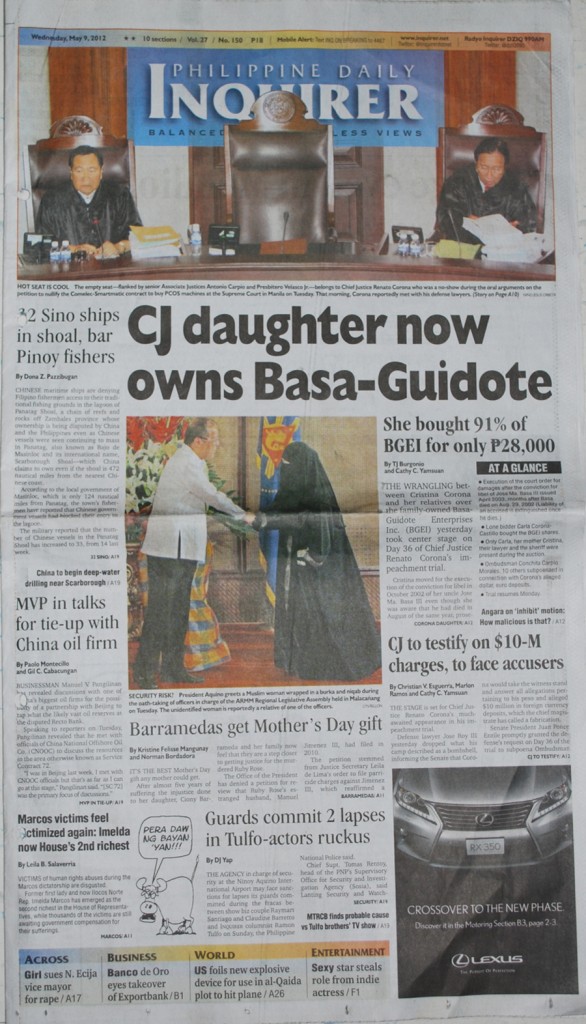 The Inquirer did not explain why a woman wearing a burqa (“a long, loose garment covering the whole body, worn in public by many Muslim women” as defined by the 2005 New Oxford American Dictionary) and niqab (“a veil for covering the hair and face except for the eyes that is worn by some Muslim women” according to the Merriam-Webster dictionary) should be considered a security risk.

In the online posting of the photo, the Inquirer had  “PALACE GUEST” for caption instead of “SECURITY RISK?”

The offending caption was in violation of two provisions in “the Canons of Good Taste for Journalists” of the Inquirer’s own Stylebook: A Manual of Style and Usage for Editors, Writers, Reporters and Students:

The caption is also in violation of existing journalism codes of ethics, among them:

Media groups National Union of Journalists of the Philippines (NUJP) and Philippine Center for Photojournalism (PCP) justifiably criticized the caption.

It was “disturbing that the paper cleared such a blatantly bigoted caption, especially after the firestorm of criticism it reaped in the wake of the Demetrio Vicente fiasco, when PDI ran a series of unflattering photos of the stroke victim when he appeared at the impeachment trial of Chief Justice Renato Corona and labeled it ‘Character witness’,” the NUJP said in a statement.

The Inquirer published a set of photos of a Corona defense witness Demetrio Vicente on its March 14 front page that CMFR found to be unflattering at least and malicious at most.

The PCP described the caption as “uncalled for, insensitive and even libelous.”

“We believe labeling a dress a security risk does not take into account the nuances of the Islamic culture. It is also an affront to the minority Muslim population of this country that a symbol of Muslim culture is labeled outright a security risk and further fuels the stereotyping of our Muslim brothers as terrorists,” said a letter to the paper signed by PCP chairman Fernando Sepe Jr.

The Inquirer apologized on May 11  and published the NUJP statement and PCP letter.  But the apology appeared at the same time as a front-page report which said that Malacañang had no policy on women wearing the burqa, and recalled an incident in the United States during which, for allegedly heckling US President Barack Obama,  a woman in a burqa was removed from a place where  Obama was speaking. A sidebar explained that the burqa is banned in some countries. The article and sidebar tended to suggest that while it was apologizing for the offending caption, the Inquirer was nevertheless justifying what it did.