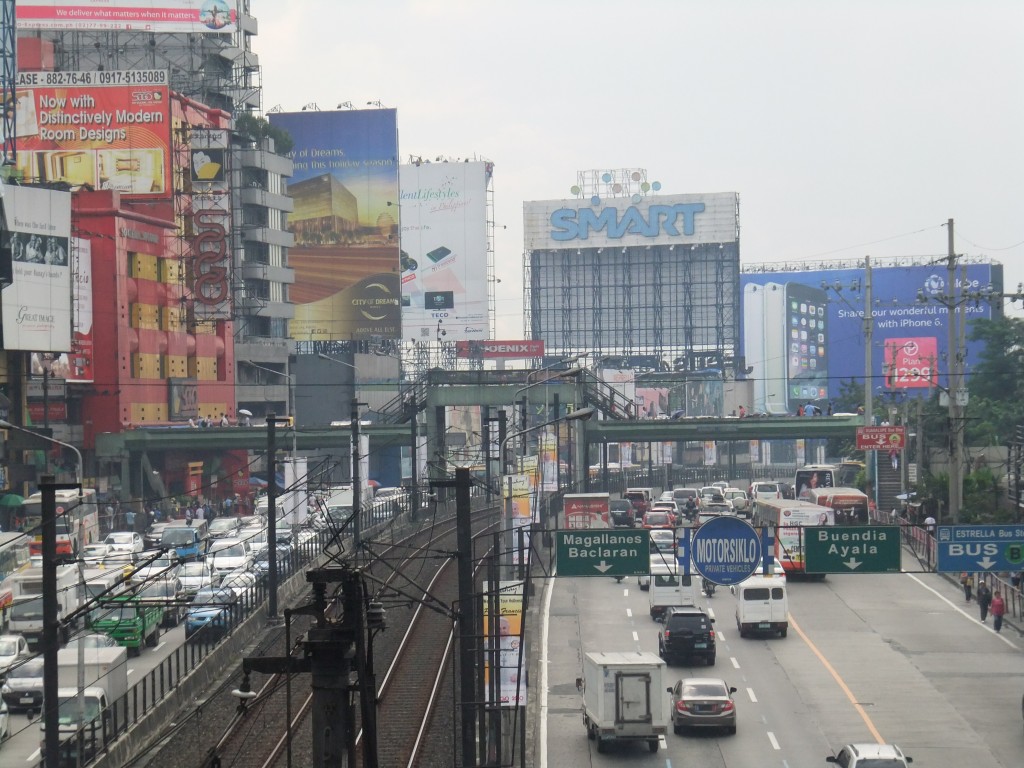 EDSA WAS designed to hold 140,000 vehicles per day. As of September 2015, the daily volume of vehicles has doubled to approximately 260,000. Photo by Lito Ocampo.

TO ADDRESS the continuing traffic woes in Metro Manila, Malacañang announced on September 1 that the Philippine National Police-Highway Patrol Group (PNP-HPG) will take over the enforcement of traffic rules and regulations on Epifanio delos Santos Avenue (EDSA).

The PNP-HPG was managing traffic on EDSA until 1995, when the Metro Manila Development Authority (MMDA) assumed responsibility for traffic management. Following this change in responsibilities, HPG focused on anti-crime operations on the country’s highways. But the worsening traffic along EDSA in the past few months prompted authorities to turn to the HPG. The unstated assumption was that the MMDA was not equal to the job.

At the same time as the announcement that the HPG would take over on EDSA, the President also tasked cabinet secretary Jose Rene Almendras to oversee Metro Manila traffic.

The media reported this new traffic scheme as soon as the announcement was made. The reports were generally accurate. The most quoted sources were Almendras, PNP-HPG director Senior Superintendent Arnold Gunnacao, MMDA chairman Francis Tolentino and PNP Chief Ricardo Marquez.

ABS-CBN News Central’s Beyond Politics, among others, provided background and context on the new traffic assignment. Beyond Politics had Almendras for guest on September 8, during which the cabinet secretary discussed the actions taken by the government to solve the traffic mess in the 23.8 kilometer highway.

Almendras said the government had identified six chokepoints that contribute to the traffic congestion along EDSA. These points are Balintawak, Cubao, Ortigas, Shaw, Guadalupe and Taft intersections.  These zones are prone to congestion due to buses and public utility vehicles and sidewalk vendors occupying several lanes, and undisciplined commuters.

The cabinet secretary along with other cabinet members reviewed, studied and did research to get into the core of problem. The authorities identified three approaches to the problem: (1) management and enforcement; (2) mass transit; and (3) engineering solutions.

While plans for mass transit and engineering solutions are still underway, some 96 personnel from the HPG were deployed along EDSA on September 7. Their task was to primarily focus on road management and the enforcement of traffic rules. The PNP-HPG was mandated to discharge primary traffic duties as well as apprehending traffic violators.

Almendras made clear in his interview that the MMDA and the HPG would be working hand in hand in this area.

The media had already established the role of MMDA as early as September 2 when the PNP-HPG was instructed to take the lead in road and traffic management on EDSA.

The major news organizations reported that aside from assigning PNP-HPG personnel along EDSA chokepoints, provincial buses would also be rerouted from 6:00 a.m. to 9:00 a.m.

Along with this rerouting scheme, the PNP also released guidelines to discourage abuses among members of the HPG while addressing concerns from motorists and traffic violators.

According to Gunnacao, the HPG would strictly enforce the “30-second rule” to minimize interaction between HPG officers and erring motorists to discourage bribery.

The Star reported on September 7 that the PNP-HPG will adopt a “zero tolerance policy” in dealing with erring motorists and those who violate traffic rules and regulation,  included motorists who will try to bribe HPG officers (“Zero tolerance on EDSA“, Sept. 7, 2015).

In preparation for the September 7 takeover of the HPG, Aksyon reported on September 4 that vendors and pedicabs had been cleared from streets along Taft. The TV5 television news program also reported that the Department of Public Works and Highways had already drawn appropriate road markings on EDSA.

The media also reported that the PNP-HPG members underwent training by MMDA on the basics of traffic management. 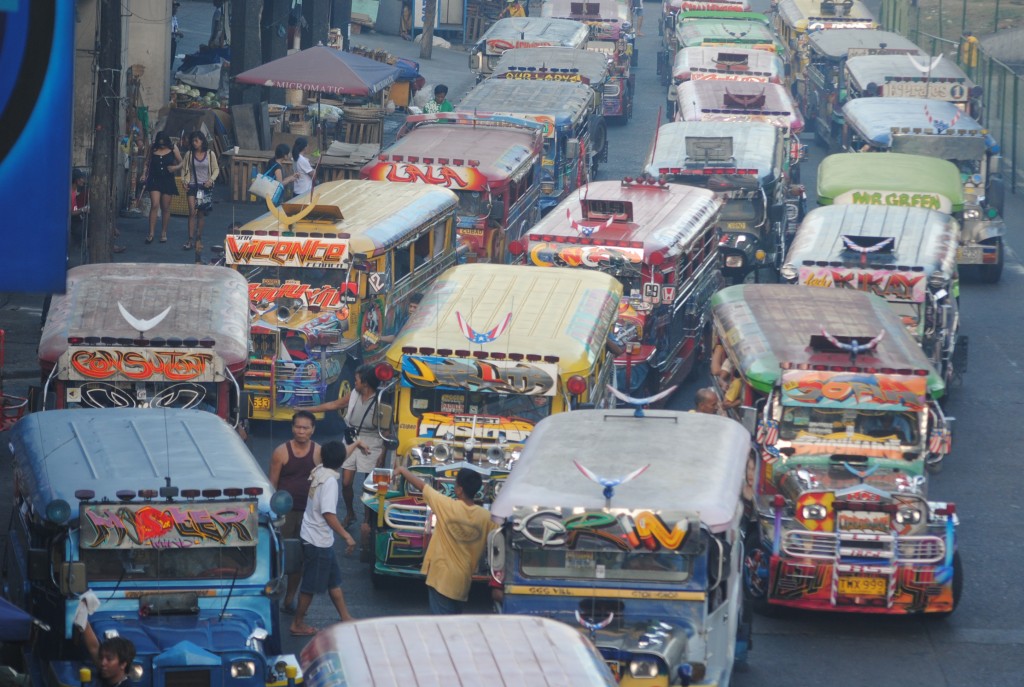 ACCORDING TO a Japan International Cooperation Agency (JICA) study released in 2014, the country loses Php2.4 billion each day because of delays caused by heavy traffic. Photo by Lito Ocampo.

The media elicited reactions from those whose opinions mattered most, the public. The broadcast media, for instance, interviewed some commuters, drivers and private vehicle owners on the new traffic mandate.  The responses were mixed.

ABS-CBN 2’s TV Patrol interviewed several commuters on September 2. One of the commuters said that it was good to see police officers on the streets as it would help prevent possible crimes. Another believed that the takeover would have no effect on traffic congestion. (“Pagmamando ng HPG, umani ng iba’t ibang reaksyon“, Sept. 2, 2015)

On the first day of the takeover, GMA 7’s 24 Oras interviewed drivers and commuters affected by the change in the route of southbound buses. Since buses bound for Southern Luzon were directed to take the C-5 route, the commuters interviewed said that the new system was inconvenient for them because they now had to board a bus either in Cubao or Pasay to get to their destinations. (“Hanggang 4 na lane sa EDSA-Balintawak, nadaanan nang paalisin ang mga nakaparada at nagtitinda“, Sept. 7, 2015)

Aksyon on September 3 provided a report that looked into the reasons why the traffic problem on EDSA has remained unsolved through the years.

Prof. Ric Jose of the Department of History of the University of the Philippines in Diliman, said that EDSA was not intended to be a main road since it was built primarily as a bypass road.

Transport Management consultant and engineer Rene Santiago said that solutions such as the number coding scheme, the odd-even scheme, the yellow lane for buses, and the truck ban are just temporary solutions. He added that given the boom in population and vehicles, Metro Manila should be decentralized and “de-imperialized.”

Travel time along EDSA had been cut by at least 10 minutes as the HPG took the lead in managing  traffic, the media reported, quoting the chief of the PNP-HPG on September 7.

The Manila Bulletin reported that a number of commuters had noted  improvements in the traffic situation and posted their positive comments on social media. But the Bulletin also reported that others still find the traffic “dreadful” (“How was traffic on EDSA?“, Sept. 7, 2015)

Improvements in the rate of road accidents were also reported.

One of the setbacks in implementing the new traffic scheme happened in the evening of September 8 when heavy rains caused flooding in Metro Manila, making many roads impassable. Thousands of commuters and motorists were stranded. The joint forces of the HPG and the MMDA were “no match” to the barely moving line of buses and private vehicles along EDSA southbound. The northbound lanes were filled with commuters waiting for public transport.

The media reported the reactions, mostly complaints, of the citizens stuck in the traffic as posted in social media.

Only into the first few days of taking over traffic management, the PNP-HPG performance still has to be evaluated fairly. As of this writing, the PNP-HPG had deployed more officers along EDSA. The Special Action Force has also volunteered its members to be part of the PNP-HPG team.

Overall, the media have so far been doing their best to cover the traffic problem, the solutions being implemented, and public reaction.