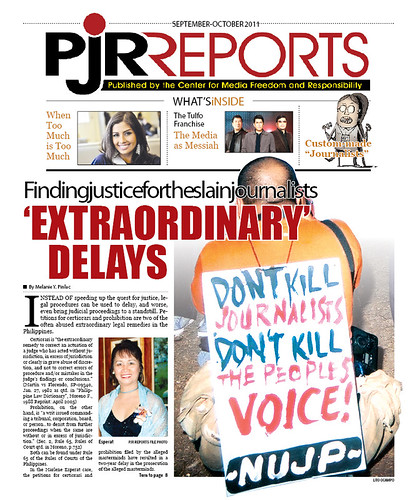 THE POSSIBILITY  that some of the journalists who have been killed in this country since 1986 might not have been ethical, or even corrupt, isn’t exactly a Revelation of Biblical proportions.

One of the characteristics of the media and press community in the Philippines is its extreme vulnerability to those practices that have come to be known as “envelopmental journalism” as well as to other ethical and professional lapses.

Research has confirmed the persistence of these practices due to, among other factors, low salaries, uncertain conditions of work, and bad training. Even more critically, studies on the subjects slain journalists were covering, such as that completed by CMFR in 2006, have suggested a link between ethical and professional lapses and the ease with which journalists are assassinated.  Unethical and unprofessional practice after all results in citizen indifference whenever journalists are killed, and thus contribute, together with the failure to prosecute them, to the killers’ sense that they can continue to kill with impunity.

On the other hand, the “hao siao,” or “fake journalist” issue, has been a major factor in the difficulty of identifying who could be credibly categorized a journalist, and therefore entitled to inclusion in the list of journalists killed in the line of duty in the Philippines. The difficulty proceeds from the fact that some individuals whom those practitioners who are regularly employed by media organizations dismiss as “hao siao” are part time, or even occasional practitioners.

Some individuals who do journalistic work—i.e., gathering information, reporting, and commenting on public events—are also at the same time doing something else, such as doing public relations for a local politician. Of course there are also those who are out and out “hao siaos” in the sense that the most they do is, armed with a press card from a dubious source, they attend press conferences so they can get in line if and when the usual envelopes are handed out.

All are part of the reality in the Philippine press and media.  These realities do deserve concern because they are not only symptoms of a damaged community. They also contribute to the difficulties of providing a public that desperately needs it the information and analysis that is the press’ responsibility to disseminate in a country that calls itself a democracy.

Both the press and media community and the public have to realize that the existence of these problems, while they do have an impact on the culture of impunity, do not by any means justify the killing of journalists. Those who call attention to these problems have every right to do so. But they need to raise these issues with care, given the possibility that, when raised in the context of discussions on the killing of journalists, the one can be construed as justification for the other.

The journalism and media community should not lose sight of the fact that the killing of individuals who were doing journalistic work, whether part time, full time, or occasionally, or whether they were on the take or not, cannot be justified—and what’s even more important, that it makes the tasks of information and analysis both difficult as well as dangerous, and a major impediment to the making of the informed public crucial to making democracy work.

When Too Much Is Too Much
by Bryant L. Macale

The Tulfo Franchise
The Media as Messiah
by Bryant L. Macale