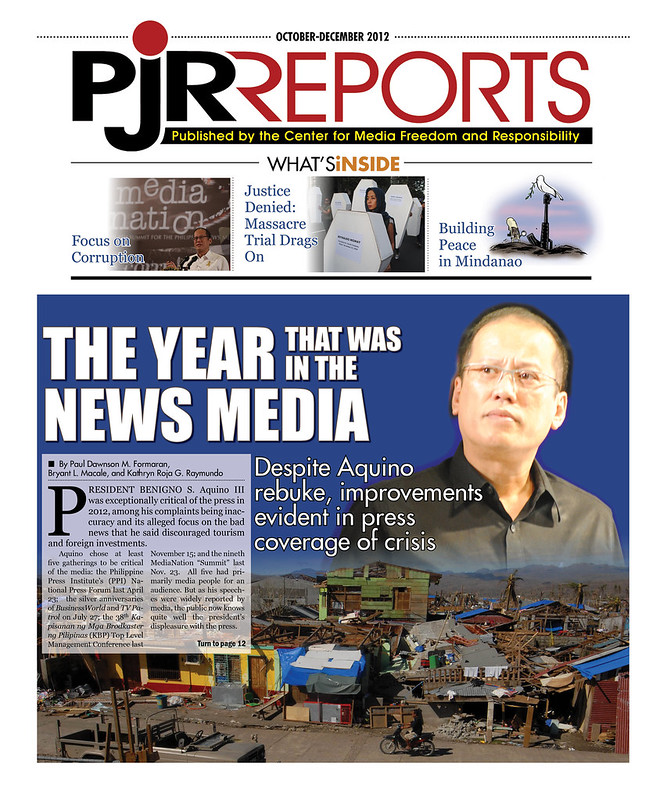 The year 2012 was particularly problematic for the Philippine press, primarily because of  the continuing harassment and killing of journalists. But Presidential and Congressional initiatives as well as default also contributed to making the year a difficult one for the news media.

The killing of journalists continued, with four journalists killed for their work, or a total of 11 since President Benigno Aquino III came to power in 2010. Libel suits filed with the obvious intention of silencing critical journalists, exclusion from press conferences, threats, and actual physical assaults also occurred with disturbing frequency.

Heading the list of congressional initiatives against free expression was the Cybercrime Prevention Act of 2012, implementation of which threatened free expression both on and off the Internet. Outstanding among the defaults of the people’s representatives was their failure to pass a Freedom of Information (FOI) bill. The failure was deliberate. Most of the congressmen, including the chair of the public information committee, pretended to support an FOI, while actually being opposed to it. They put all sorts of obstacles on its path while insisting on a quid pro quo in the form of a right of reply rider.

Mr. Aquino’s expression of support for the Cybercrime Prevention Act—he did sign it last September—and particularly for its provision on libel among the online offenses for which offenders could be penalized with imprisonment,  and his frequent criticism of the press for, among other lapses,  inaccuracy and its supposed focus on the bad news, could only have helped make 2012 an even more problematic year for free expression—as did his refusal, for the second year in a row, to include the FOI bill in his list of legislative priorities.

Mr. Aquino’s failure so far to take the steps necessary to  hurry the pace of the trial of the accused in the Ampatuan Massacre and to decisively address such other  factors which have been instrumental in the killing of journalists as warlordism in the countryside have also helped encourage the continuing  intimidation of journalists by sending the message to those offended by unfavorable press coverage that they can continue to harass, threaten and even kill them.

As a result, the passage of the Cybercrime Prevention Act while the FOI bill continues to languish in Congress,  the continuing killing of journalists that Mr. Aquino has not done much to stop, and Mr. Aquino’s seeming hostility to the press, have been interpreted  in some journalists’ circles as  constituting “a declaration of war” by government against the press community. In this context,  those media advocacy and journalists groups that value free expression have pledged to respond in kind to any further attack on  the press from government functionaries, whether congressmen or Mr. Aquino himself.  A campaign against those who pretend to be press freedom’s friends but who are not, and those responsible for such laws as the Cybercrime Prevention Act, is  thus likely to surge in 2013.

It’s a choice the congressmen and Mr. Aquino themselves made—and on the eve of an election year too.

The Year That Was in The News Media
By Paul Dawnson M. Formaran, Bryant L. Macale and Kathryn Roja G. Raymundo

On a Learning Curve in a World of Change
By John Reiner M. Antiquerra

State of Press Freedom
Attacks and Threats in 2012
By Melanie Y. Pinlac