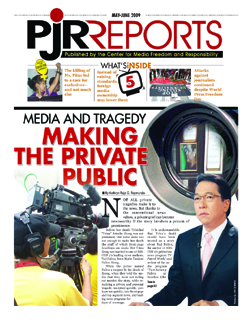 Reporting “one of their own” was problematic for some of the media.

Commentary
Thailand
The End of Self-Regulation? by Roby Alampay

The TV5
What Foreign Media Ownership Might Mean by Edsel Van DT. Dura

The Wages of Corruption by Dino Balabo

World Press Freedom Day 2009
“Nothing to Celebrate” by Melanie Y. Pinlac with a report from Verniece T. Zamora