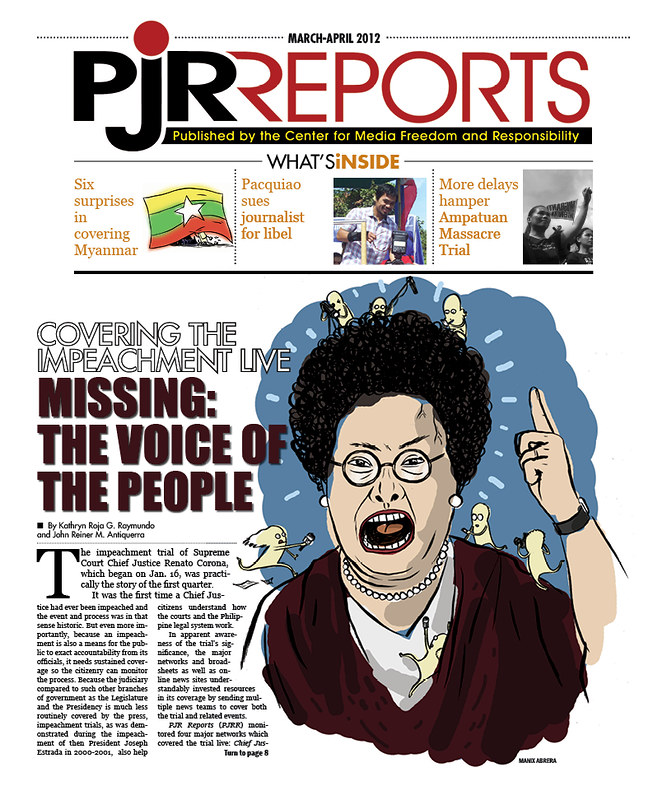 The practice of summoning journalists to testify in court or during congressional hearings is based on the popular assumption that they possess secret information of relevance to the trial or hearings.  It is practically unheard of for journalists to be summoned before such bodies to testify on, or to repeat, what they’ve already written or broadcast.

The prosecution panel in the Corona impeachment trial  announced that it would  subpoena several journalists as witnesses on the seventh article of the impeachment charges (“Respondent betrayed the public trust through his partiality in granting a temporary restraining order [TRO] in favor of former President Gloria Macapagal Arroyo and her husband Jose Miguel Arroyo in order to give them an opportunity to escape prosecution and to frustrate the Supreme Court decision on the effectivity of the TRO in view of a clear failure to comply with the conditions of the Supreme Court’s own TRO”), apparently on the assumption  they have previously undisclosed information to reveal at the Senate impeachment court.

Among the journalists the panel said it would ask to testify were Marites Vitug and Raissa Robles. Vitug would also be asked about her research on the judiciary. The mistaken assumption is that Vitug and Robles have somehow become privy to the details of the relationship between Corona and Arroyo because of their work as journalists. Vitug wisely refused to testify, while in a letter to the prosecution panel, Robles said she had “no personal knowledge” that would shed light on the validity or otherwise Article VII.

Compelling journalists to testify, whether in court, congressional hearings or other venues and occasions in which they’re likely to be forced into revealing information other than what they have already made public in print, broadcast or online,  too often becomes the occasion for violating the ethical imperative of respecting confidentiality agreements.  The need to respect such agreements is acknowledged in most codes of ethics, and though somewhat awkwardly, in the second provision of the Philippine Journalists Code of Ethics (“I shall not violate confidential information or material given me in the exercise of my calling.”)

Revealing information given in confidence can result in sources’ refusing henceforth to be interviewed.  Some journalists think that this professional consequence—limitations on access to sources—is what justifies the ethical mandate to respect confidentiality agreements. But  what’s really crucial—journalism codes of ethics are not so much meant to make the journalist’s job easier but to protect journalists’ sources and subjects as well as the public—is that revealing information given in  confidence can adversely affect the welfare and well-being of the source, or even endanger his or her life.

The more experienced journalists in the Philippines have  thus wisely refused to be forced into situations in which they will have to choose between respecting those agreements or being held in contempt. Apparently, however, government agencies and officials have yet to realize that compelling journalists to reveal information given to them in confidence can have harmful and even fatal consequences.

Covering the Impeachment Live
Missing: The Voice of the People
by Kathryn Roja G. Raymundo and John Reiner M. Antiquerra

Why I Quit Journalism
by Caloy h. conde