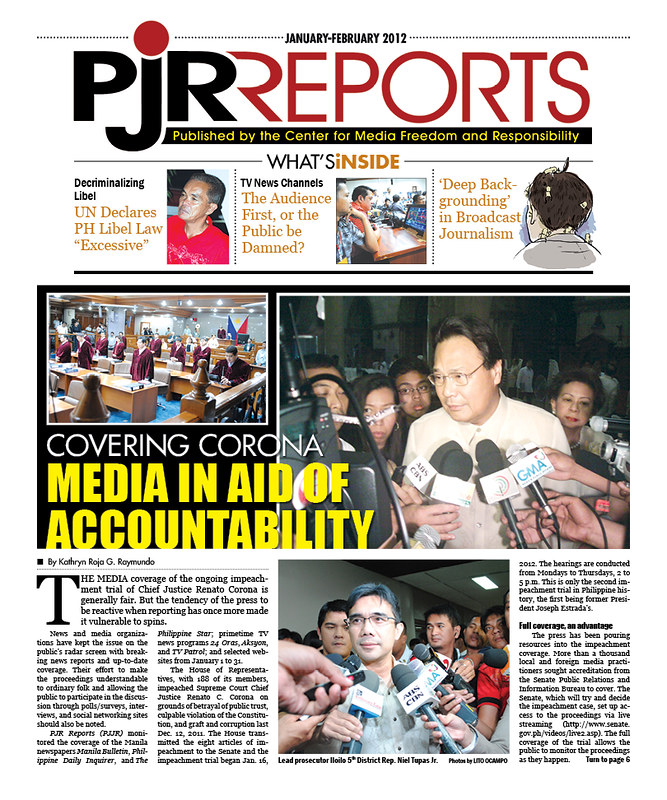 A victory for press freedom, but—

The nine-years during which Gloria Macapagal Arroyo was in power were particularly problematic for journalists and press freedom. Among other threats, her husband Jose Miguel “Mike” Arroyo filed 11 libel suits against 46 journalists starting in 2006. Davao broadcaster Alex Adonis was also convicted and imprisoned in 2007.

Adonis’ offense was that he read during one of his broadcasts a tabloid account of then House Speaker Prospero Nograles’ allegedly being seen in a hotel where he had supposedly spent the night with a woman whose husband had materialized in the hotel in search of his wife. Nograles sued, and Adonis was convicted in absentia despite his lack of adequate legal representation, and sentenced to five months’ to four years’ imprisonment.

With the Center for Media Freedom and Responsibility (CMFR) and the National Union of Journalists of the Philippines (NUJP) as co-signatories, after serving two years of his sentence, Adonis filed through lawyer Harry Roque a complaint before the United Nations Human Rights Committee (UNHRC) alleging that Philippine libel law is incompatible with Article XIX of the International Covenant on Civil and Political Rights (ICCPR).

The UNHRC agrees with the complaint and has urged the Philippine government to review the libel law, decriminalize libel, and compensate Adonis for time served in prison. As a state party to the ICCPR, the Philippine government must now submit a report to the UN within six months detailing compliance with the Committee’s suggestions. It is by far the most significant development in the decades-long fight against a law whose repressive and colonial roots have no place in a country with such democratic pretensions as the Philippines, and a major victory in the campaign to enhance the right to free expression and press freedom.

But a caveat is in order.

Assuming it will indeed happen, the decriminalization of libel presents the press and the media with both a challenge as well as an opportunity. It will require them to raise their capacity for self-regulation beyond its current level of deficiency. A working self-regulatory media regime will require both rigorous media observance of the press and media’s own protocols as well as widespread public understanding of the values, methods and ethical and professional standards of the press so that it can effectively monitor and curb media abuse.

I would also emphasize the need for a sustained campaign for public media literacy and awareness not only of those values and standards, but also of the variety and availability of the means of redress available for those aggrieved by media.

Among journalists in whatever medium, whether print, radio, TV or online, an even greater emphasis on the rigorous observance of and compliance with, the ethical and professional standards of journalism should be undertaken by journalists and media advocacy groups as well as by the schools where journalists are trained. The latter will require engagement with the Commission on Higher Education towards raising the standards of instruction of the over 100 colleges and universities offering journalism, broadcasting, mass communication and communication arts courses.

Together with these steps we also need to strengthen such self-regulatory media mechanisms as the Kapisanan ng mga Brodkaster ng Pilipinas (KBP), the regional and national press councils, and media monitoring publications, among others, in order to provide the public with accessible and credible means of redress short of the filing of libel suits, which for too long has been the preferred means of addressing media abuse.

Without these steps, violations of the ethical and professional standards of the press and the media will continue to the detriment of both the journalism profession as well as the public, which is likely to oppose the decriminalization of libel unless it is assured that there are available means of redress for those who have been wronged by the media and the press.

As to the form the decriminalization of libel should take, I would argue that provided all these conditions are in place, it should eventually consist of the outright repeal of the Revised Penal Code articles on libel and defamation (Articles 355, 353 to 359), leaving only the pertinent articles of the Civil Code (RA 386) to address media abuse of the subjects and targets of their reports, commentary, and analyses.

Portions of this note were presented at the UP Law Center February 17 roundtable discussion on the implications of the UNHRC view that the Philippine libel law is incompatible with the ICCPR and were adapted from the author’s BusinessWorld column of February 3, 2012

TV News Channels
The Audience First, or the Public be Damned?
by Bryant L. Macale and John Reiner M. Antiquerra