While there are complaints about blocktimers even among broadcasters themselves, these are not brought to the attention of the KBP and even if discussed during KBP meetings, “we just talk about it in passing; nor do we talk about it at length or in depth maybe because we are so busy with the survival of our respective stations,” Brillantes said.

But the question is: Why do politicians have to have blocktimers when they can just buy political advertisements?

“The problem with a political ad is that it is an ad. It is aired alongside ads for detergents, medicines, fertilizers, and all the clutter during the campaign period,” Brillantes said in the vernacular.

Political ads are allowed only during the 45-day campaign period for local elective positions and each candidate or registered political party has an allocation of only 60 minutes for television and 90 minutes for radio based on the Fair Elections Act.

Name recall and exposure are two important factors a candidate must consider if he or she wants to win, and political ads cannot do it alone, a local political planner who also asked not to be named, said. “There has to be a systematic and sustained propaganda campaign way before the campaign period and this can be achieved only by having blocktimes or by having a stable of paid reporters and anchormen.” Enter the blocktimer and his paid-for program.

Most of the blocktime programs are concentrated in two stations—dyRL-Abyan Radyo of Eduardo Cojuangco Jr.’s Radyo Pilipino Corporation, and dyAF-Radyo Veritas owned and operated by the Diocese of Bacolod of the Roman Catholic Church.

Grupo Progreso (The Group for Progress) is the dominant local political party to which Mayor Evelio Leonardia, Vice Mayor Jude Thaddeus Sayson, and most of the city councilors are members. It is partly financing a 10-hour block over dyRL according to one of its on-air performers, former city councilor Alex Paglomutan.

Puentabella, who is the current chair of the Philippine Olympic Committee, on the other hand, is funding a five-hour block over dyAF Radio Veritas, according to dyAF chief operations officer Rodolfo Tano.

Once political allies, Leonardia and Puentevella had a falling out prior to the 2004 elections during which there was a noted increase in the demand for blocktime programs.

“It is now the lifeblood of the station,” Tano said when asked what made the Church decide to dyAF’s airtime leased.

With limited manpower, no newsroom and no mobile patrol, Tano said the Church is spending more than P250,000 a month just to continue operations and “that is why we decided that there is really no harm in selling airtime.” 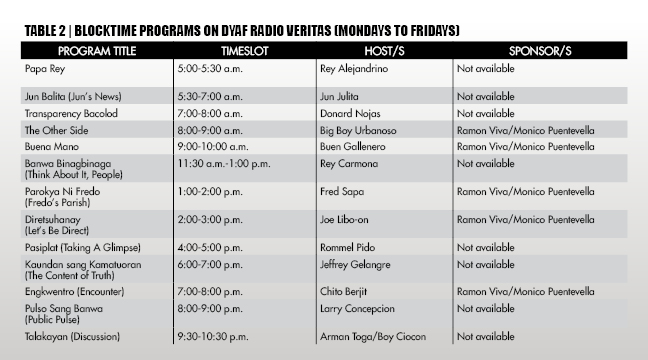 While almost 70 percent of its 17-hour broadcast schedule everyday is devoted to blocktime programs, Tano said the “weekday spiritual needs” of Catholics are fulfilled because of Radio Veritas.

“We are a Sunday church, we remember the Church only during that day that is why there is a need to remind people that they have a faith,” he added.

While all of the blocktimers have their own political sponsors, five of them are paid for by Ramon Viva, the chief-of-staff of Puentevella.

“But it is actually the former congressman who is the sponsor,” Tano said.

Among the blocktimers sponsored by Puentevella is Fred Sapa, former production chief of dyAF Radio Veritas and an award-winning commentator when he was still with dyWB Bombo Radyo-Bacolod.

Gallenero is former station manager of RGMA Super Radyo while Urbanoso is former news director of the same station. Joe Libo-on is a former defense reporter for Bombo Radyo while Berjit started out immediately as an anchorman for the blocktime program.

The other blocktimers are lawyer Renecito Novero, a former vice mayor who ran and  lost twice for congressman. He is reported to be running for the vice mayoral post in the coming elections.

Another lawyer, Bong Dilag, is former national director for barangay operations of the Department of Interior and Local Government during the Cory Aquino administration. He ran as city councilor in the last polls but lost. He is reported to be considering a comeback for the same position in the 2012 polls.

Marlon Solidum is a broadcaster who ran but lost as city councilor in 2010.

(Viva did not return the calls and text messages of this writer, while Puentevella was in London for the Olympic Games.)