BACOLOD CITY – It is one of those “open secrets” in Philippine broadcasting.

Politicians would buy chunks of radio time and populate the programs with broadcasters who would, like regular anchormen, discuss the news, and analyze and comment on them, but who would give a favorable spin to the news  when his or her principal is  involved. Or they attack their financier’s opponents in the name of “transparency,” “public interest,” or “good governance.”

They are collectively called  “blocktimers”—those who do journalism, sell goods or proselytize during leased station hours and who are not regular employees of any radio station.

The word itself has become associated with bad journalism—biased reporting, below-the-belt commentaries, crass and vulgar language, and one-sided presentation of facts among so many others.

But are all blocktimers that bad?

“The impression is that they are ‘bad eggs’ of the industry, but it is only an impression,” Kapisanan ng mga Brodkaster sa Pilipinas (KBP)-Negros Occidental chairman Salvador “Buddy” Ferrer said.

There is no doubt for Ferrer, however, that a station is “courting trouble and potential headaches” when it allows blocktimes especially those that are paid for by politicians or political groups.

Regular station programming on AM radio here is interspersed with blocktimes ranging from five minutes to 10 hours. Most of them are of the news and public affairs format, others are the religious type while some are health programs sponsored by herbal food supplements.

“The sad fact is that most of those who do blocktiming think of the industry only as a livelihood; they have forgotten their social responsibility,” dyRL station manager Renee Brillantes said in the face of the influx of blocktimers over the past few years. 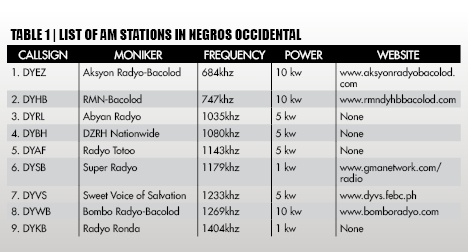 Not all blocktimes and blocktimers are created equal, a fact that KBP’s Ferrer and industry officials admit, especially when these are compared to quality blocktime programs like “The Probe Team” of veteran journalist Cheche Lazaro that pioneered the magazine-type investigative show in Philippine television.

Most blocktimers here would bristle when told they’re nothing more than “paid hacks,” with some of them insisting that they strictly adhere to the ethical standards of journalism even though their programs are paid for by politicians and political groups that have self-serving interests especially when the political season—which starts long before the actual elections—comes.

Of the more than two dozen radio blocktimes in the city, only one—Mercado Publico (Public Market) anchored by Vic Mercado—is acknowledged by broadcast journalists and industry leaders as not openly advocating any particular political interest and which still hews close to the format of a station-run program. For them, Mercado still practices responsible journalism.

Mercado has been a commentator anchoring the evening primetime slot for RMN for more than three decades, first in Iloilo then here, and was station manager of dyHB RMN-Bacolod before he left the post in the early 2000. He has been a blocktimer with dyRL-Abyan Radyo since then.

But who are the politicians or political groups that finance blocktime programs? What do the blocktimers think of their role as broadcasters? What are the ethical and legal questions concerning blocktimers? Are blocktimers beneficial for broadcasting and the listening public?

The need of politicians for blocktimes

Since the lifting of the ban on political advertisements in 2001, politicians in this city have been trying to outdo each other by having their own blocktime programs that they perceive give them an edge over their opponents.

One media planner who asked not to be named said that spending for blocktimers pays off “when the going gets rough, tough and dirty” especially during the final stretch of the campaign period when issues intensify and there is a need “not only defend but also to counter-attack.”

While there has been no case of election-related killing in the city for the longest time based on the records of the Bacolod City Police Office, not a few reputations have been assassinated or sullied, to say the least, a fact even the local KBP head recognizes.

“It’s not only affecting the industry but it is actually deteriorating the industry; if I were to suggest, stations should disallow blocktimers because most of the time only politicians or political parties  can afford (to finance blocktimers),” Ferrer said.