JEERS TO The Manila Times for its inaccurate and unfair reporting last June 17 on a Supreme Court (SC) Justice’s alleged tantrums.

The report, “SC Justice slammed for misbehavior,” alleged  that Associate Justice Marvic Leonen’s  “misbehavior that include tantrums”  has  “drawn the ire of his colleagues.” However, the report, which was posted on the Times website on June 16,  and saw print the following day, did not get Leonen’s take on the issue.

According to the report, a “well-placed source” had said that “the latest of Leonen’s ‘outbursts’ was directed at the American Bar Association (ABA) which organized the 10th International Judicial Colloquium on Insolvency at The Hague in the Netherlands held from May 18 to 19.” The report did not identify who the “well-placed source” was.

The article added that Leonen accused the ABA officials of “deliberately shaming him” after he was wrongfully referred to as a “Court of Appeals Justice.” However, there was no statement from the ABA to support the claim. Neither did the report present the side of the associate justice or of the Supreme Court.

“A few SC Justices who were interviewed by The Manila Times said that the issue was so petty that Leonen should not have raised hell about it, ” said the report, which did not identify its sources, choosing instead to refer only to “one magistrate,” “the Justice,” “another magistrate,” and “the source.”

CMFR has long held that “The fundamental demand of truth-telling is accuracy, which requires the practitioner to check and recheck information: to develop ‘the habit of accuracy’ including the capacity to anticipate possibilities of error, as well as alertness to questionable or biased information.” (CMFR Ethics Manual)

The Manila Times should have consulted several identified sources to present every side of the story and not rely on a few sources that it could not even identify.

On June 18, the Times published another article on the issue. The report, “Leonen denies ABA tantrum,” which presented Leonen’s side through Theodore Te, head of the SC Public Information Office, whom Leonen had authorized to speak for him.

Te said in the report, “There was a clerical error in the position attributed to him, but it was pointed out by his staff by the time that when the conference started, nacorrect na. And that was that. As far as he was concerned, it was OK. He attended the conference, there was no further issue.”

However, the report insisted that Leonen had “misbehaved,” but again failed to name its sources. “Sources said Leonen cannot deny the fact that he ‘flared up’ over the inadvertent mistake committed by the American Bar Association (ABA).”

“Sources said Leonen had accused ABA of deliberately shaming him, and instructed his Executive Assistant to lodge a complaint with ABA,” the report reiterated.

On June 19, The Manila Times posted on their website a letter from Justice Marvic Leonen addressed to one of the Times’ senior reporters. Referring to the article “SC Justice slammed for misbehavior,” Leonen said the International Judicial Colloquium on Insolvency was organized by the International Association of Restructuring, Insolvency and Bankruptcy Professionals and not by the ABA, as the Times article claimed.

Leonen added: “My understanding is that it is good journalistic practice to hear every side of a story, to give every side an opportunity to respond. Unfortunately, only one side of the story was presented in your report, and an incorrect one at that. One wishes that you might have tried to verify your story with our office, or with the Supreme Court Public Information Office. You failed to do so.” 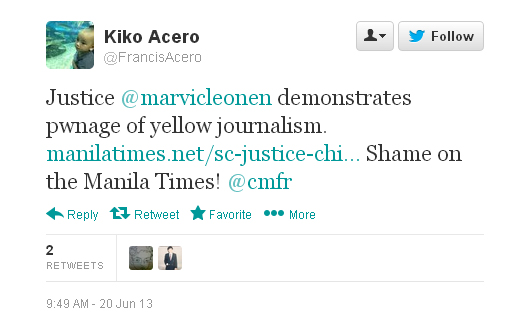