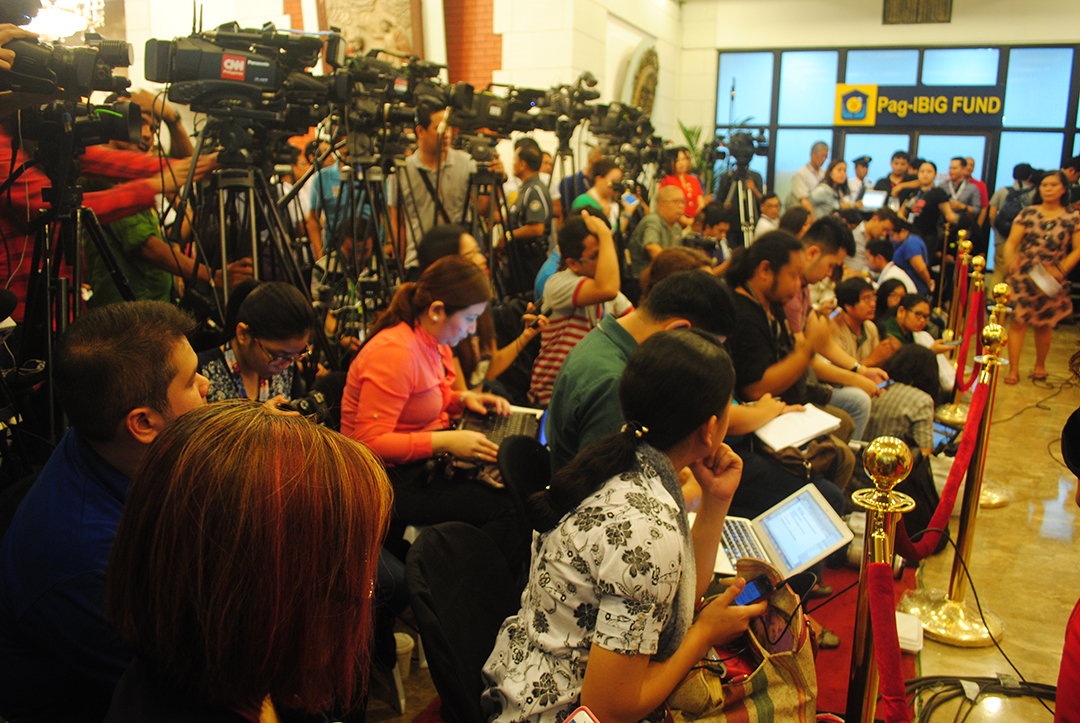 THE FILING of certificates of candidacy (COC) on October 12 to 16 signaled the start of the election year.Presumably serious political aspirants flocked to the national and local offices of the Commission on Elections (Comelec) to formalize their intention to run for government posts. The Comelec reported that 130 aspirants for the presidency filed COCs, 19 for vice president, and 172 for the Senate.

CMFR monitored how four television news programs (ABS-CBN 2’s TV Patrol, GMA 7’s 24 Oras, TV5’s Aksyon and CNN Philippines’s Network News) and three national dailies (the Philippine Daily Inquirer, The Philippine Star and the Manila Bulletin) covered the five-day event. CMFR found that the media generally focused on personalities and trivia—and missed out on explaining why so many are running for vice president without teaming up with a presidential candidate.

News on the presidential and vice presidential candidates dominated television programs and newspapers during the five-day event. Most of the news reports used the same template—who are running, who their running mates are (if any), and what party they represent.

The candidates prominent in the polls and surveys for the past few months were given much of TV airtime. These included the tandems of Vice President Jejomar Binay and Senators Gringo Honasan, Grace Poe-Llamanzares and Francis Escudero, former Department of Interior and Local Government Secretary Manuel “Mar” Roxas and Camarines Sur representative Leni Robredo, and the unlikely team of Senators Miriam Defensor-Santiago and Ferdinand “Bongbong” Marcos, Jr.

Senators Allan Peter Cayetano and Antonio Trillianes IV, who both filed COCs for vice president without running mates, were also featured. Running for the second highest government position without a president is uncommon in Philippine politics, but escaped much of the media’s attention.

These candidates’ focus on the vice presidency could suggest what their game plans are, but the media apparently were either not interested in finding out and explaining why this was happening, or were occupied with other, less important matters.

The media, for example, followed Davao City Mayor Rodrigo Duterte’s supposed run for the presidency. Media speculation on Duterte’s intentions ended only when he failed to file a COC on October 16, the deadline for the filing of COCs, but by that time so much space and time had been devoted to the mayor that other issues were simply ignored.

The media also allotted pages and pages and much airtime to celebrity candidates for local and national posts as well as to actors who were endorsing certain candidates.

The Bulletin published a banner story stating that “It was a star-studded third day in the filing of the certificates of candidacy (COCs) at the Commission on Elections (Comelec) main office in Intramuros, Manila, yesterday.” The story reported that a slew of actors, as well as incumbent and returning senators filed COCs as candidates for the Senate.(“Stars outshine 2016 hopefuls at Comelec,”, October 15).

To top the emphasis on trivia, what seems to have equally occupied the media were the individuals who have been described this early—and by the media themselves—as nuisance candidates.

The Bulletin reported the filing of COCs by “unexpected” candidates, but said that they gave “color”to the event—as if the presence of actors and the supposed followers of certain candidates was not enough to make the event so colorful it was turning into another freak show. Among those featured were Daniel Magtira who claimed to be wooing Kris Aquino; Adolfo Inductivo, whom the report described as a Heneral Luna fan; Danilo Lihay Lihay who boasted that he would settle the country’s debts; Ephraim Defeño who wore a cowboy outfit for the occasion ; Sel Hope Kang whose slogan is “Dalisay na Daan (pure path)” as opposed to the administration’s “Tuwid na Daan (straight path)”; and Leonardo Bola who ran in the 2010 elections during which he sang his own composition. (“Unexpected candidates put ‘color’ into first filing day,” October 13). The media also had a field day reporting the antics (including his burning a Chinese flag) of perennial candidate Ely Pamatong.

The press did provide the legal definition of“nuisance candidate” by citing section 69 of the Omnibus Election Code. The Comelec can cancel the COC of anyone if the person who filed it has: (1) no bona fide intention to run for office; (2) intends to make a mockery of the election process; and, (3) intends to confuse the public through the similarity of his or her names with that of a registered candidate. The report also pointed out that the Comelec can declare any independent candidate a nuisance if he or she cannot prove that he or she has the capacity to wage a national campaign. (“The anatomy of a nuisance candidate,” October 15).

There were efforts from the media to discuss the qualifications for high government posts after some citizens said that the current policy on COC applications is unrestrained. The media were quick to get the opinion of Comelec spokesperson James Jimenez, who said that the current system is “robust and democratic.” (It is the ministerial duty of the Comelec to accept COCs of those who want to run for office. Deliberations on the qualifications of a political aspirant happen only after the filing of COCs.)

But these were overshadowed by the media reports on such trivia as some politicians’ consulting feng shui and numerology experts before filing their COCs.

To prove it, 24 Oras even interviewed “feng shui master” Marites Allen on October 14 who said that, indeed, many politicians consult her. (“Feng shui a factor in certain politicians’ filing of COCs, says geomancer,” October 14)

The coverage of the period for the filing of COCs was mostly focused on either the prominence or the oddity of the political aspirant involved. Efforts to provide substance were limited to reports on the qualifications of candidates for the presidency and vice presidency.

The focus on “nuisance candidates” has always been a feature of media reporting on the run-up to Philippine elections. While obviously intended to amuse readers and viewers, one of its consequences has been to encourage others who’re simply after their fifteen minutes of fame to file certificates of candidacy. Even more seriously, the same focus detracts from the supposedly serious nature of electing the country’s leaders by making the process itself appear to be an occasion for amusement, in the context of some candidates’ already making it seem like the circus for which Philippine elections have often been derided. It doesn’t bode well for Philippine democracy. The coverage of the week showed up media’s role in projecting the electoral exercise as a source of national entertainment.